Setting the record straight on the much maligned hyena 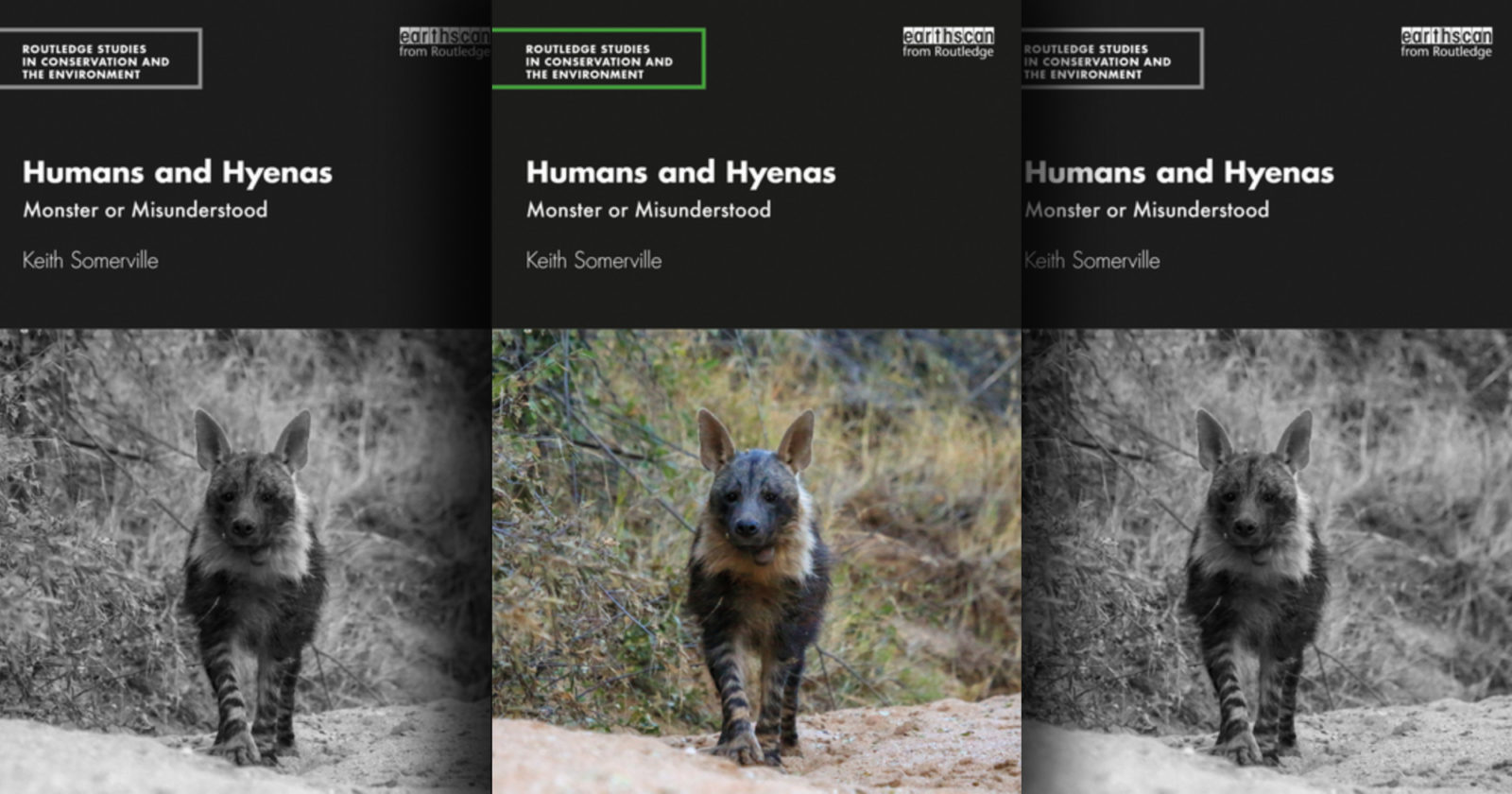 Cowardly, scavengers, maniacal harbingers of witchcraft – the hyena image in the human mind is hardly flattering. Thanks to the likes of Disney, ancient prejudices live on in the 21st century. A new book aims to set the record straight.

In his new book Humans and Hyenas: Monster or Misunderstood, Keith Somerville aims to repair the predator’s undeserved reputation in human eyes. Somerville’s title might be slightly misleading: he clearly regards the monster of the human imagination as misunderstood. Through an extensive overview of scientific, historical and popular literature, Somerville uncovers the roots of the misconceptions around the three species of hyena – the striped, spotted and brown – and makes a compelling case for the cause of their conservation.

“No other animal is quite so bound up in people’s minds with death as the hyena, and across practically all of its range in Africa, West Asia and South Asia it features in mythology and folktales, with strong associations with evil, cowardice and witchcraft,” Somerville writes.

“European accounts of hyenas, secondhand and garbled, follow many of the same patterns and incorporate the myths about hermaphroditism derived from the unusual external form of the female genital organs of spotted hyenas. In folktales and myths, there is a thread of genuine fear of an animal that killed stock, even killed and ate people, and which digs up graves and eats corpses. This provides a starting point for the imagery of the hyena, but with inaccuracies, superstition and outright falsehoods woven into the narratives. Over millennia this has created an image of hyenas that is common globally and taken up with gusto in films and the media, and even in wildlife documentaries.”

Associations of hyenas with witchcraft and the occult are a common theme. In North Africa, Somerville notes that the spotted hyena historically “… was persecuted where it was blamed by pastoral and farming communities for attacks on stock (especially goats, sheep and poultry), supposed threats posed to children and the aura of the occult surrounding it because of its digging up and consumption of human corpses from graveyards.”

“An aspect of southern African supernatural/occult beliefs is the ape-like creature the tokoloshe or tokolotši, found in Zulu, Xhosa, Sotho, Tsonga and other belief systems. The belief is that it is a witch that turns itself into a tokoloshe or that the tokoloshe is a familiar of the witch, which can ride on the back of a hyena. The Gusii people of Kenya also associate hyenas with witches operating at night and tell their children they must not leave their huts at night as the witches and hyenas will catch and devour them.”

It must be said that hyenas, as Somerville does note at times, are not the only animals that have been linked to witchcraft. Animal attacks on humans in Africa – whether from the lion’s claws or the crocodile’s jaws – are often associated with witchcraft. This reviewer has raised the possibility elsewhere that the ubiquity of witchcraft belief in Africa – a conservative social force – could stem from the intensity of human/wildlife conflict in the region and the fact that an animal attack is the one natural event that can resemble an intentional act of malice.

Hyena vocalisations are also associated, to human ears, with maniacal or evil laughter. Superb predators, hyenas are also highly adaptable opportunists which, like most carnivores, will scavenge when the prospect arises. Yet the view that they are “cowardly scavengers” is widely entrenched.

The predators’ place in people’s pecking order has produced some perplexing sagas. In Namibia, a population of feral horses has been a source of conflict, with conservationists who regard them as rare pushing for protective measures such as the elimination of the region’s spotted hyenas, which prey on the equines.

“By early 2019, it reached crisis point as horse numbers plummeted from 286 to only 77. At the urging of an NGO called the Wild Horse Foundation, MET (Namibia’s Ministry of Environment and Tourism) took the bizarre decision to shoot some of the hyenas after the only foal in the herd was injured by hyenas – thereby choosing conservation of a feral species over an indigenous one,” an incredulous Somerville writes.

The ironies of the Anthropocene run rampant.

Somerville’s ire is also directed at Disney and the monstrous depiction of hyenas in 1994 cartoon film The Lion King and the digitally enhanced 2019 remake.

“The characterisation of hyenas in the two films has been hugely influential in reinforcing and advancing the concept of hyenas as evil, skulking, cowardly, destructive and cunning but stupid animals,” Somerville says.

This hardly bodes well for hyena conservation. Somerville makes the sensible observation that: “What is needed is a recalibration of our view of conservation, moving away from overemphasis on charismatic, headlining species and towards emphasis on habitat and biodiversity conservation, in which a hyena is no less important and worthy of survival than a feral horse, lion, tiger, panda or elephant.”

This reviewer’s only quibbles relate to the structure of the book, which can be redundant in places, taking away from its potential narrative pace. For example, much of the information laid out in the first chapter could have been weaved into the subsequent chapters. The estimates for populations in various countries are repeated more than once.

The book would also have benefited from more on-the-ground colour and reporting, which admittedly was not possible for most of last year because of the pandemic. Still, this stands as a definitive work on hyenas and the historical journey they have taken with humans during the Anthropocene. It is an indispensable resource for anyone with an interest in hyenas. DM/ ML/ OBP