So far, Police findings indicate that once obtained, the private parts are used for medicinal purposes notably producing sex boosters. 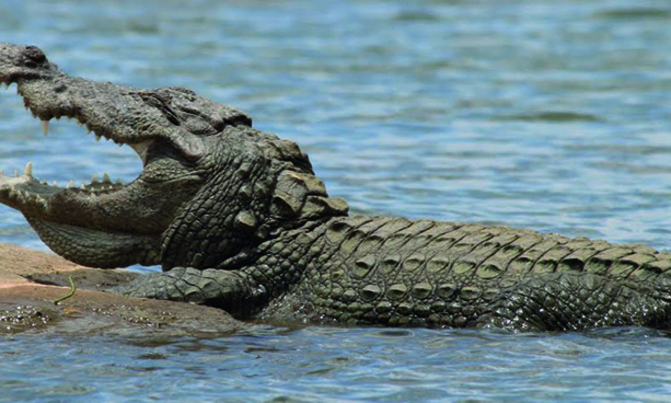 Nile crocodiles, the world’s second largest reptiles, are renowned for their ferocious behaviour. Just when you thought it is unnerving to come face-to-face with the insanely dangerous reptiles, some people are on the lookout for them to get a piece of their private parts.

Police detectives attached to the general crimes department at the Criminal Investigations Directorate (CID) have interrogated two foreigners on Buvuma islands following their involvement in the killing of male crocodiles whose private parts are lucrative on the black market.

CID has remained tightlipped on the identities of the foreigners for fear of jeopardising the investigations though their particulars have been sent to the Directorate of Immigration to furnish them with details of entry.

However, findings indicate that they are attached to a steel factory in Mukono district.

So far, Police findings indicate that once obtained, the private parts are used for medicinal purposes notably producing sex boosters.

Francis Olugu, the commissioner, general crimes at CID headquarters in Kibuli, Kampala, who is heading the investigation, says they discovered the involvement of foreigners following the arrest of the area chairperson and his colleague on Buvuma Island in May, this year.

“They track down male crocodiles using the local community at a fee,” he said without divulging the details.

Olugu added that the chairperson and his colleague, while being interrogated at CID in Kibuli, said “the foreigners buy the private parts of the crocodiles for as much as sh5m.”

The number of Ugandans being attacked by crocodiles on lake shores has been on the increase, as people move closer to rivers in search of livelihoods.

In the past year alone, more than 100 people have been mauled to death by the reptiles, but environmentalists say the number might be higher as some cases went undocumented.

The tables have now turned and crocodiles could be on the verge of making it to the list of the most endangered animals — thanks to people who are hunting them for a fortune from selling their private parts.

Olugu said crocodiles are not the only endangered species in Uganda.

Others include elephants whose tusks are extracted for ivory, pangolins (scales), hippos (teeth), buffalo (game meat) and Antelopes (meat and horns).

Uganda Wildlife Authority (UWA) communications manager, Bashir Hangi said he was not aware of the particulars of the case, but said CID (Police) is a fully Crocodiles fledged body that carries out its own investigations.

He said the actions of the businessmen is an offence that it punishable by law.

“If anybody is to take wildlife specimens or products, they have to be authorised (which I doubt in this case) — this involves killing wildlife. I hope they (suspects) will be arraigned in court,” Hangi told Sunday Vision, on telephone on Tuesday.

Over time, the problem animal management staff from the Community Conservation Unit have been at the helm of capturing man-eating crocodiles in different areas including Kungu area in Apach district near Lake Kyoga and Ngamba Island, which had been disturbing residents for a long time.

Routinely, the captured crocodiles, which had mauled a number of fishermen and maimed other residents have since been relocated to the Victoria Nile in Murchison Falls National Park.

Human encroachment on wildlife habitats is one of the biggest challenges to UWA and conservation in general.

The main cause of this are changes in land use and the increasing search for farmland, which lead to a decrease in the wildlife range.

UWA has a team of skilled staff to respond to reports about crop raiding, threats to livestock and to communities.

These are dealt with using methods, such as scare shooting to chase the problem animals back into the protected area, capturing and translocation and sensitising the communities.

As a last resort, individual animals that fail to return to the protected area may be sport hunted or killed in order to reduce the threat.

Those killed under sport hunting generate revenue for the communities through the hunting fees, which in turn discourages poaching and contributes to conservation.

In 2011, a foreign news agency (Smithsonian magazine) reported that the demand for alternative remedies has given rise to a poaching industry that, along with other factors, has decimated animal populations.

Species are disappearing quickly that scientists now debate whether the earth is going through its sixth mass extinction.

Plants and animals go extinct for a variety of reasons, including climate change, habitat destruction, hunting and the introduction of non-native species.

The use of animal parts in traditional medicine can also contribute to a species’ decline, despite there being no real evidence of the efficacy of these treatments.

The rarity of a creature does not protect it from being killed in the name of “medicine”; it just raises the market price.

But in the 1990s, China removed the animal from its list of ingredients approved for manufacturing medicines — rhino horn was supposed to relieve fevers and lower blood pressure, though any such effect was debunked by science — and rhino populations began to recover.

That quickly changed a few years ago, after rumours circulated in Vietnam that rhino horn had cured a very important person of terminal liver cancer.

Poaching, particularly of black and white rhinos in South Africa, ramped up and the animals are threatened once again.

Domestic varieties or hybrids may be all that remains in Southeast Asia, according to some estimates, or there could be a couple of hundreds pure water buffaloes left or possibly thousands.

Researchers agree, however, that the species is endangered.

But that has not stopped people from hunting them in places such as Cambodia (the water buffalo is considered an alternative to rhino horn in the treatment of conditions ranging from fever to convulsions).

And the water buffalo has already been eliminated from swaths of Laos, Bangladesh, Indonesia and Sri Lanka.

This small, freshwater crocodilian species now number fewer than 200 in the wild, mostly restricted to a small reserve in the Anhui province of China, on the lower Yangtze River.

Alligator meat is promoted as a way to cure the common cold and to prevent cancer.

Alligator organs are also said to have medicinal properties. Captive breeding, in an effort to restore the species, has proved successful and there are now thousands of captive animals and new efforts to reintroduce them into the wild.

Asian elephants were once thought to be relatively immune to poaching—unlike their African relatives, only some males, instead of all adults, have ivory tusks — but that is not true.

The animals are killed for their meat, hide, tusks and other body parts.

In Myanmar, for example, small pieces of elephant foot are turned into a paste to treat hernias.

A bigger concern, though, is loss of the Asian elephant’s natural habitat and increasing conflict between the animals and the growing human population.

Seven species of musk deer are found in Asia, and all are on the decline.

Thousands of male musk deer have been killed for their musk pods, a gland that produces the musk that gives the animals their name and has been used in perfumes.

The musk, a brown, waxy substance, can be extracted from live animals, but “musk gatherers,” who can get about $200 to $250 per gland from foreign traders, find it easier to kill the deer.

Though perfume makers have found synthetic alternatives to musk, the hunting has not stopped.

Musk deer meat is considered a local delicacy, and musk is still used in traditional medicines for treating cardiac, circulatory and respiratory problems.

Humans killed the animals for their skins and to eliminate competition for water between the zebras and livestock.

The zebras can now be found only in northern Kenya and a few parts of Ethiopia.

The Kenyan government developed a plan in 2008 to conserve the remaining population.

Included in the effort was the recognition of the need to work with traditional healers who use the zebra’s meat and fat to treat diseases, such as tuberculosis.

While tigers originally lived across Asia, from Turkey to the eastern coast of Russia, their range has now dwindled to roughly a dozen countries in East and South Asia and as few as 3,200 tigers may be left in the wild.

Their decline is the result of the use of tiger skins, bones, teeth and claws in traditional medicine; they are believed to cure toothaches and protect against malicious curses, among other maladies.

Criminal poaching syndicates can now get as much as $50,000 for the parts from a single tiger and although international law bans the commercial trade of tigers, several countries permit the farming of tigers, further driving black-market demand.

The sun bear is just one of several bear species killed for its gallbladder, which is used for treating everything from burns to asthma and cancer.

Their population has declined by more than 30% in the past three decades due to hunting and loss of their forest habitat.

The killing of sun bears is illegal throughout their home range in SouthEast Asia, but these laws are rarely enforced.