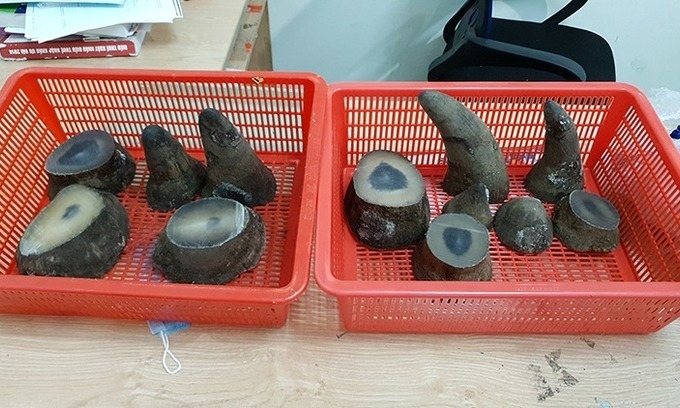 A HCMC court Friday sentenced a man to six years in jail for illegally transporting rhino horns weighing over six kilograms from Mozambique.

He claimed in the court that in Mozambique a Chinese acquaintance had paid him VND8 million ($345.17) to transport “rare goods” to Vietnam without telling him what they were, and he had not checked them either.

On March 6 he was caught at Tan Son Nhat Airport in HCMC by customs officials with 12 rhino horns wrapped in aluminum foil in his luggage.

African rhinos are on the list of endangered wildlife species that are not allowed to be hunted, traded, stored, or transported under the Convention on International Trade in Endangered Species of Wild Fauna and Flora.

Duong admitted he knew it was illegal to transport rhino horns.

The sale and purchase of rhino horns are strictly prohibited in Vietnam.

There is big demand for rhino horn in Vietnam as well as China where some traditional medicine practitioners use it to treat a range of conditions. Many people believe rhino horn has near-miraculous powers to cure diseases like cancer. Besides, rhino horn is considered a status symbol.