Simon Kipsang, wildlife ranger, with a dead giraffe which has been poached and butchered for food in the Rukinga Wildlife Sanctuary near Tsavo

Lockdown in Kenya has left millions unemployed and hungry. Now they are hunting endangered animals to survive. Reporting by Will Brown, Africa Correspondent. Pictures by Simon Townsley in Tsavo, Kenya

This article has an estimated read time of five minutes

In parts of Kenya, the economic damage wrought by the coronavirus pandemic has been so catastrophic that people have started to kill endangered wildlife for food.

Last week, The Telegraph trekked with rangers through the Tsavo conservation area, a region larger than Wales in southeastern Kenya, and found a Masai giraffe which had been stripped bare by poachers for bushmeat.

“They have really done a hell of a job on this one,” muttered a ranger when we came across the mass of bloodied bones, organs and skinned hide. “They’ve even cut the meat out from in-between his ribs.” 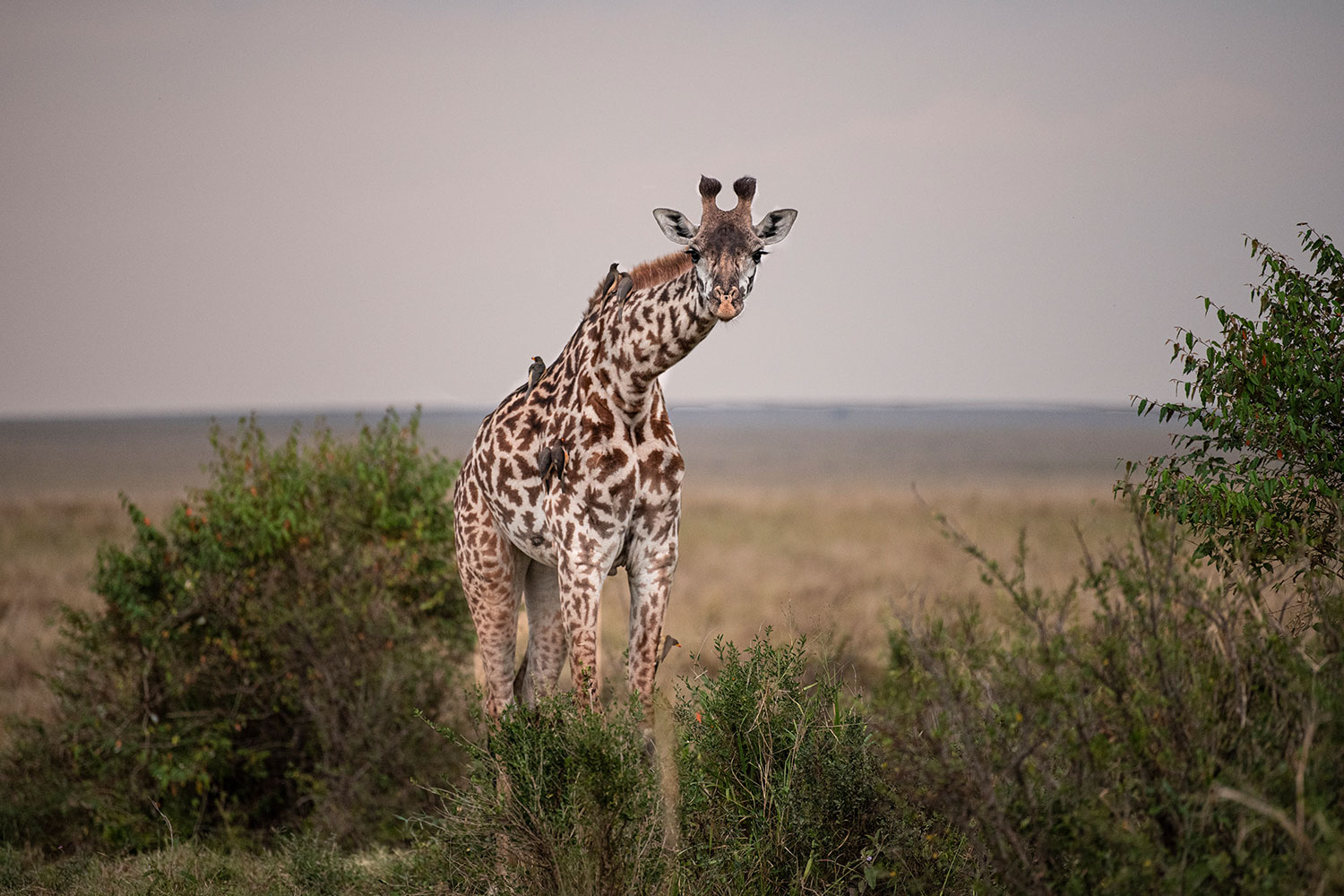 Giraffe on the Masai Mara

In life, just hours earlier, the fully grown bull would have weighed about two and a half tonnes and stood almost 20ft off the ground. Its legs would have been strong enough to kick in a lion’s chest. But now there was almost nothing left.

Three to four poachers probably surrounded the giraffe at night and used flashlights and horns to stun it, like a giant rabbit in headlights. Then one would have hacked at its hamstrings with a machete to bring it down, the rangers said.

A cruel gash underneath the giraffe’s neck is where they dealt the final blow.

About a tonne of meat was cut off the beast — worth an estimated $1,000 — and wheeled away on bicycles to be eaten at home and sold in local markets as beef. Even its testicles were cut off and taken, most probably to be used in a traditional Chinese remedy for erectile dysfunction. 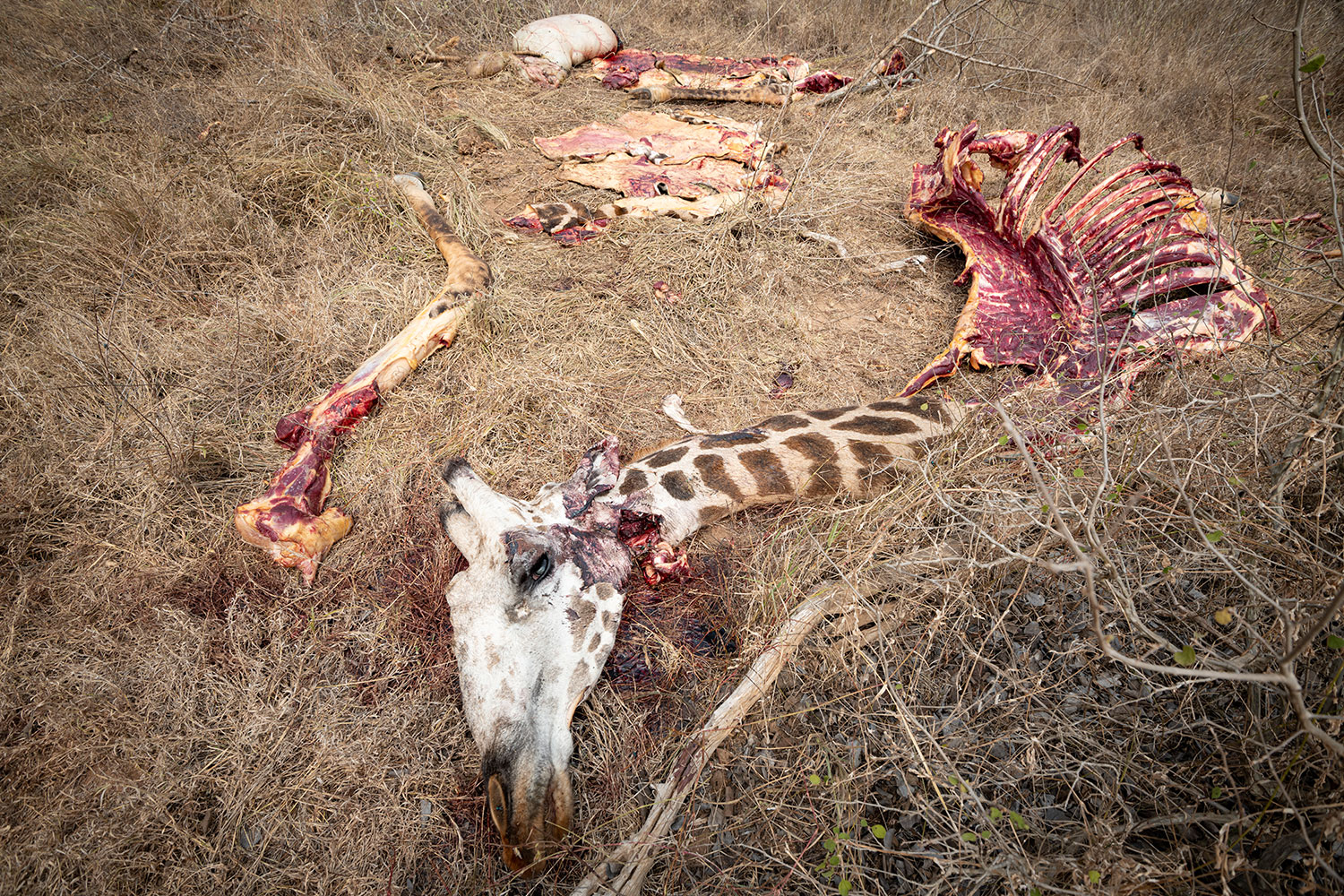 Much of Africa’s conservation work relies on rich international tourists flying in to gawk at beasts through oversized cameras and rarely used binoculars.

But in late March, as the pandemic began to rage through Europe, Kenya’s government all but sealed the country off from the outside world and implemented a draconian lockdown preventing travel between different regions. 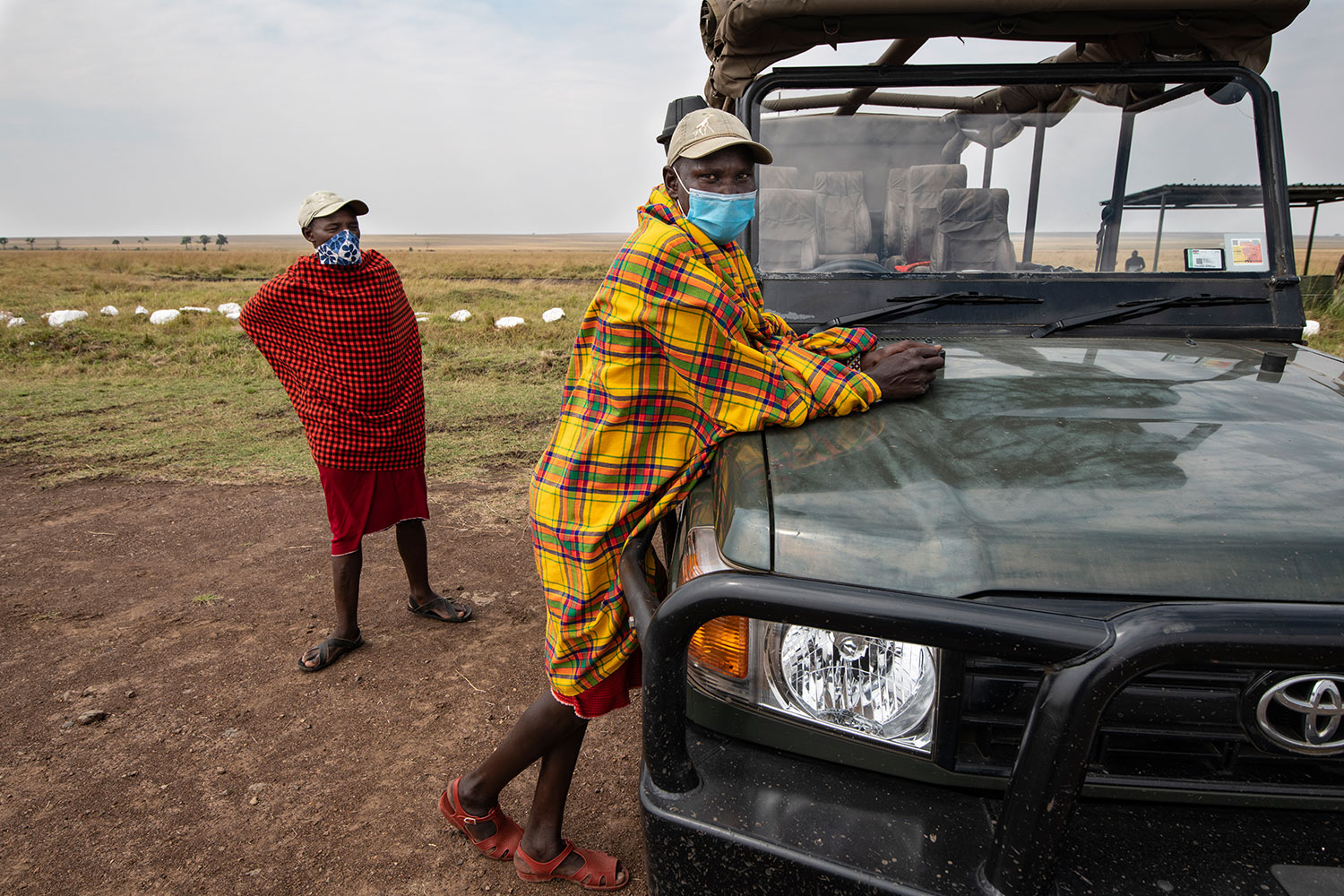 Guides on the Masai Mara wait for incoming flights 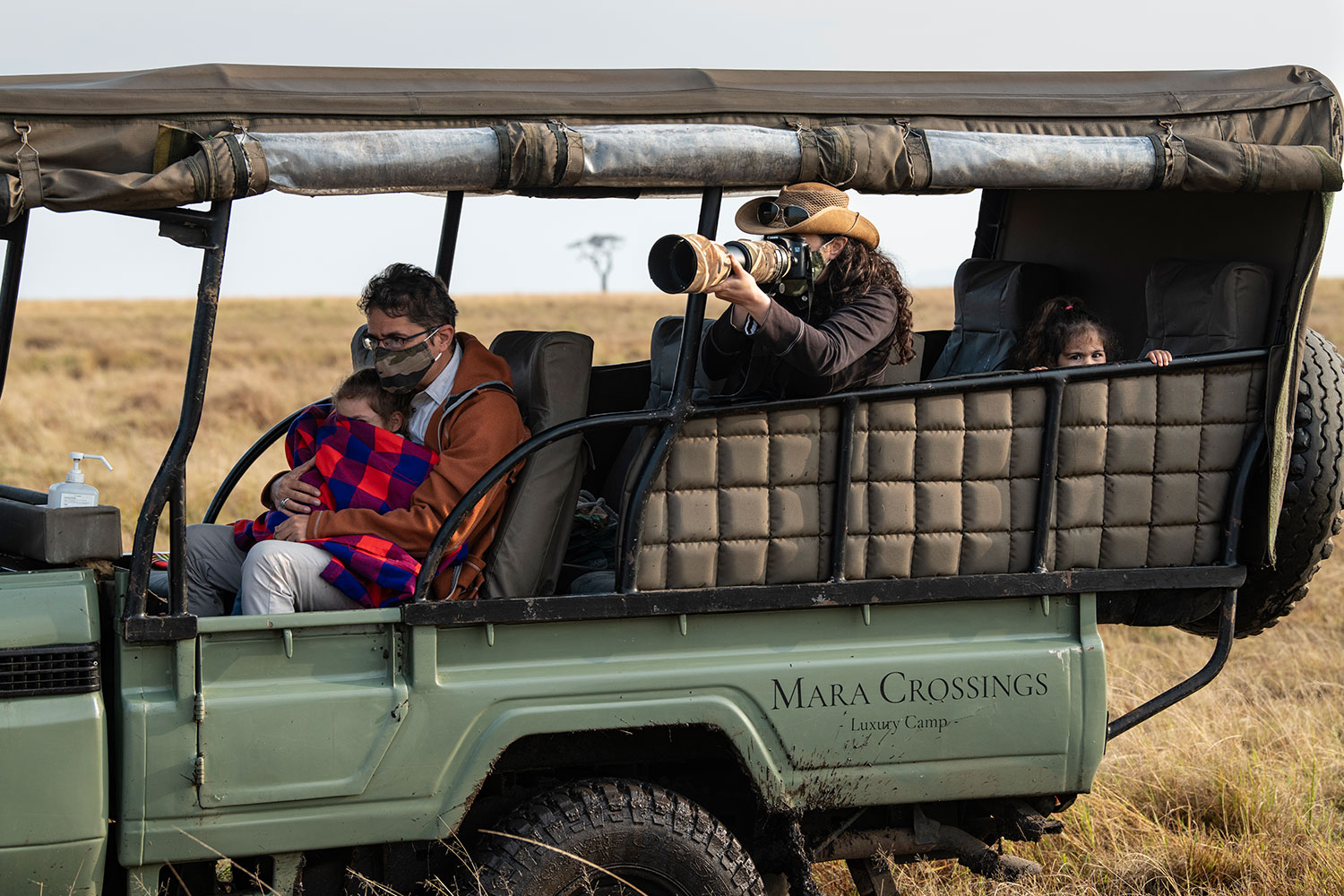 The tourist sector — worth about 9 per cent of Kenya’s GDP — was effectively wiped out overnight. Hundreds of safari lodges, which would normally rake in more than $1,000 a night per guest, laid off staff off en masse.

By late June, the country’s Tourism Ministry said that the country’s tourism operators had put more than 80 per cent of their staff on unpaid leave.

“I’ve never seen anything like it. There has been no business and no money. Even the children aren’t going to school. I was not paid for months. All you could do is stay at home and eat what you can,” says Peter Maithya, a hotel worker at Ngutuni Lodge in Tsavo East.

“[Since the tourists left], poverty has gone up. House break-ins have gone up. Young people are stealing goats and chickens. There are a lot of school dropouts and teenage pregnancies,” laments Peter Rangi, a chief in Tsavo’s Marungu Ward.

Mr Rangi points towards a teenage girl sitting with three male relatives outside his ramshackle office and explains that her family have brought her to ask for his advice.

“There is nothing to eat, so the girl has gone and done bad things for money to get food for her grandfather,” he says. “We are very worried about what will happen if this crisis goes on.” 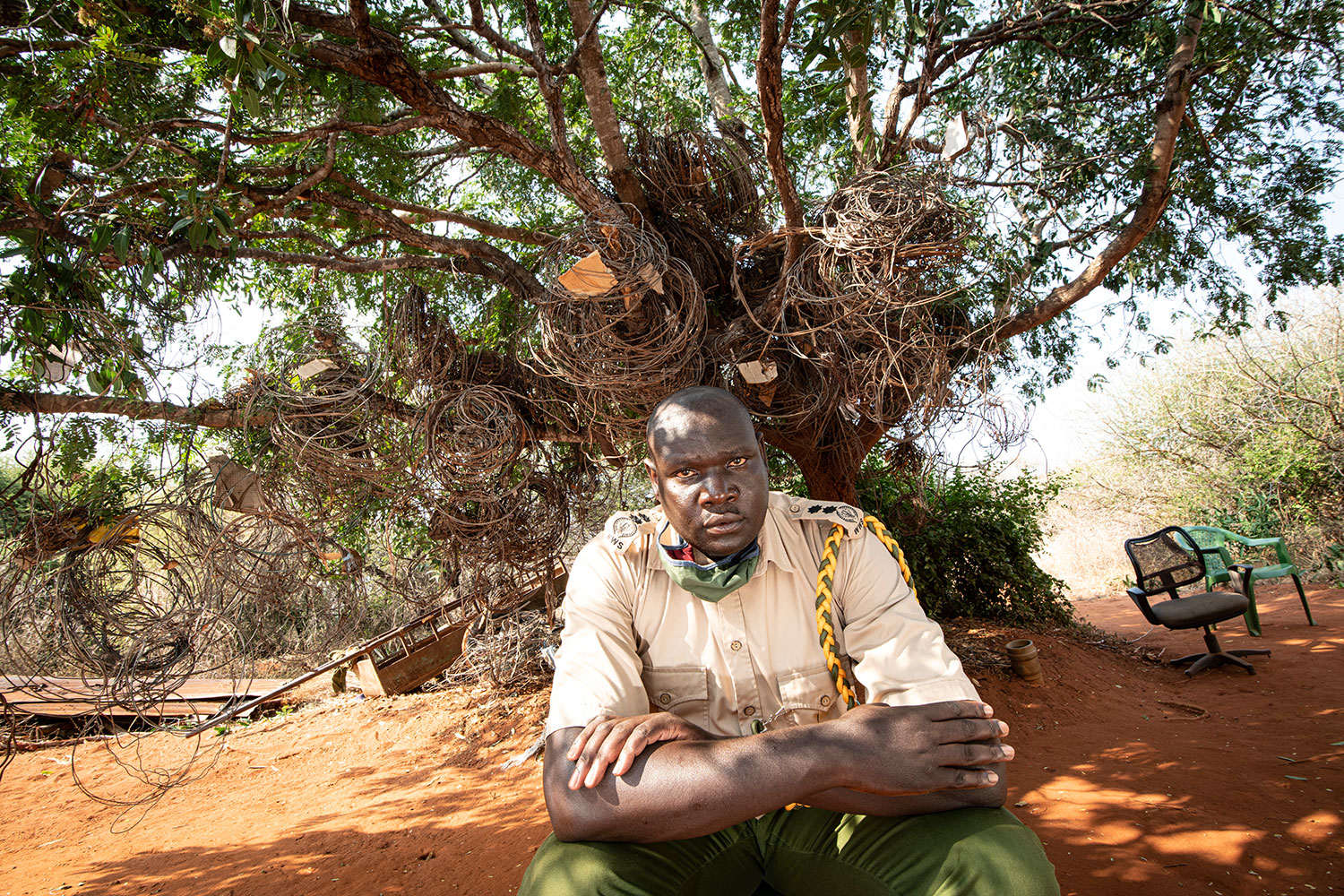 Erik Sagwe, the 19-year veteran Chief Ranger, in front of the “tree of snares” which holds thousands of illegal snares seized in the Rukinga Wildlife Sanctuary near Tsavo

Now wildlife conservationists say that commercial poaching and bushmeat hunting are surging in many parts of Kenya, as many rural communities, who have received almost no help from the government, struggle to feed themselves.

“Since April the destruction has gone up tremendously. We have reported cases of poaching in areas that have never seen incidents before,” says Erik Sagwe, head ranger at Wildlife Works, a conservation company working across Tsavo.

Mr Sagwe commands a team of 100 rangers who patrol half a million acres by car, foot and gyrocopter, tracking poachers and illegal loggers. The same day they found the giraffe they also found an elephant which had been killed by a poison arrow and had its tusks hacked off, something they have not seen in two and half years.

Mr Sagwe says that they are finding new animal snares almost every day and that many people have also started to cut down protected forests in the area to make charcoal.

“People are looking for money any way they can,” he adds. 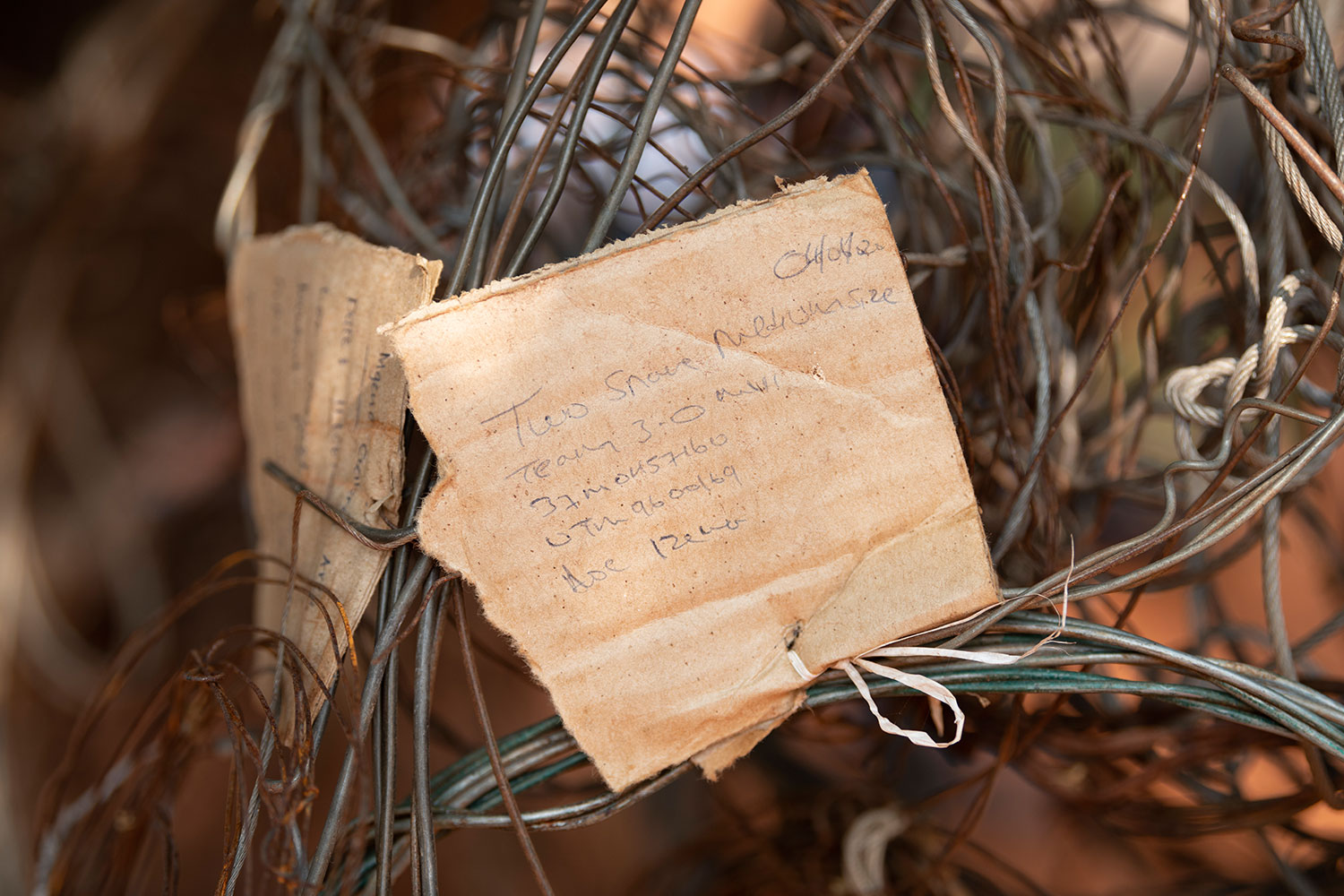 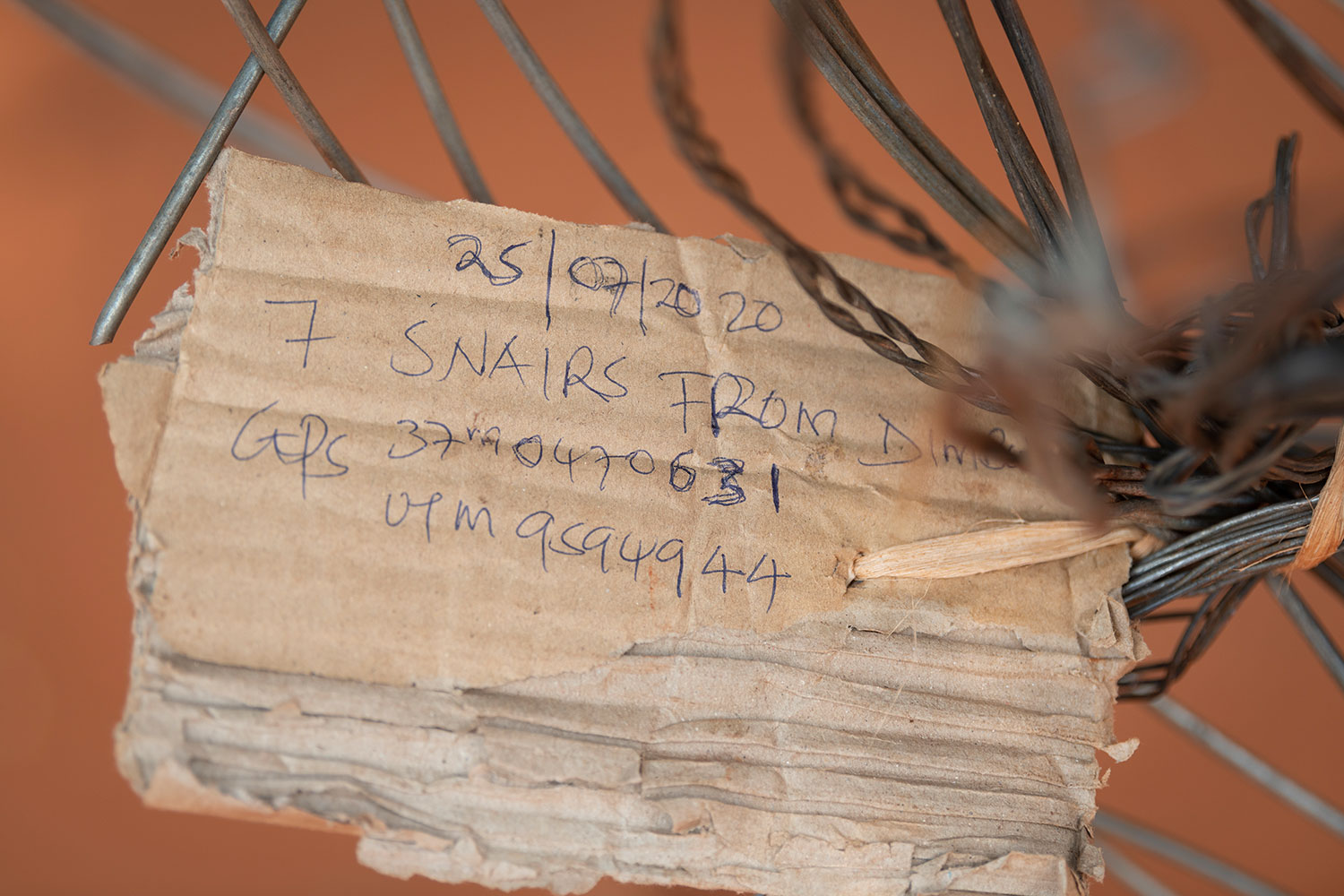 The problem is not just confined to Tsavo. In July, the Mara Elephant Project, an NGO, recorded the highest levels of illegal logging and charcoal making since it was founded and an “alarming’ increase in bushmeat poaching in Kenya’s Mau Forest.

“From what I’ve seen since the beginning of Covid, a great deal of tourism staff have been laid off, and at exactly the same there has been an increase in poaching,” says Geoff Mayes, who has worked as a private safari guide across Eastern and Southern Africa for 28 years.

“Bushmeat hunting happens anyway. But there has been a significant rise across Kenya. People are resorting to dramatic measures to put food on the table. We are also hearing similar reports from Zimbabwe and Zambia,” adds Mr Mayes.

Kenya reopened its airspace at the beginning of this month, hoping international tourists would flock back to see the great annual migration of millions of wildebeest, zebra and gazelle across the plains of the Masai Mara into Tanzania. But sadly they have stayed away despite covid-secure measures having been put in place.

Ole Koile, a Masai Mara ranger in a Manchester United mask, mans a checkpoint into the park. He says that barely any cars have come in for months.

One luxury bush camp manager in the Mara told The Telegraph that many lodges were still closed and that those which have opened were operating at a 10 per cent capacity and charging a fraction of their standard rates. 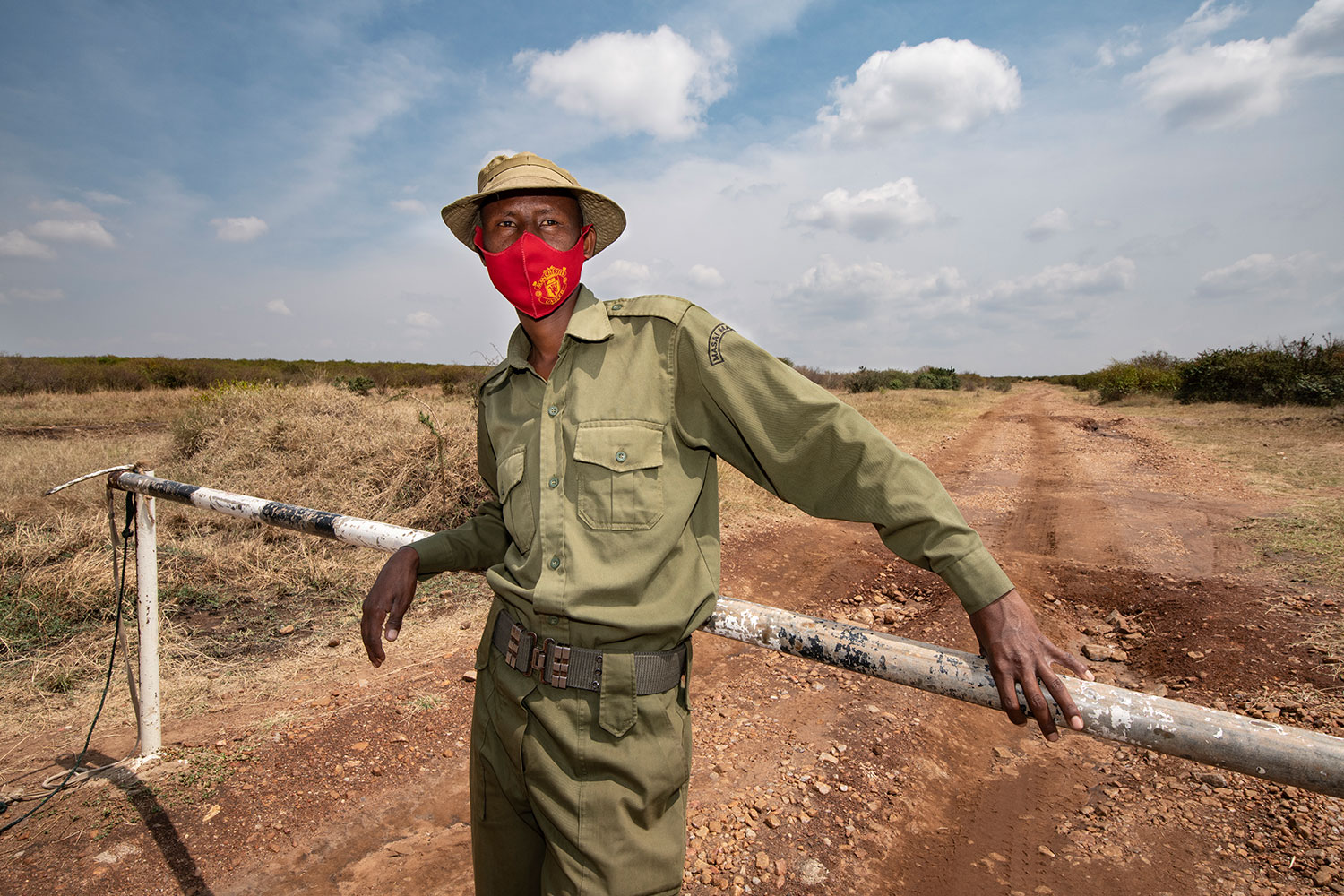 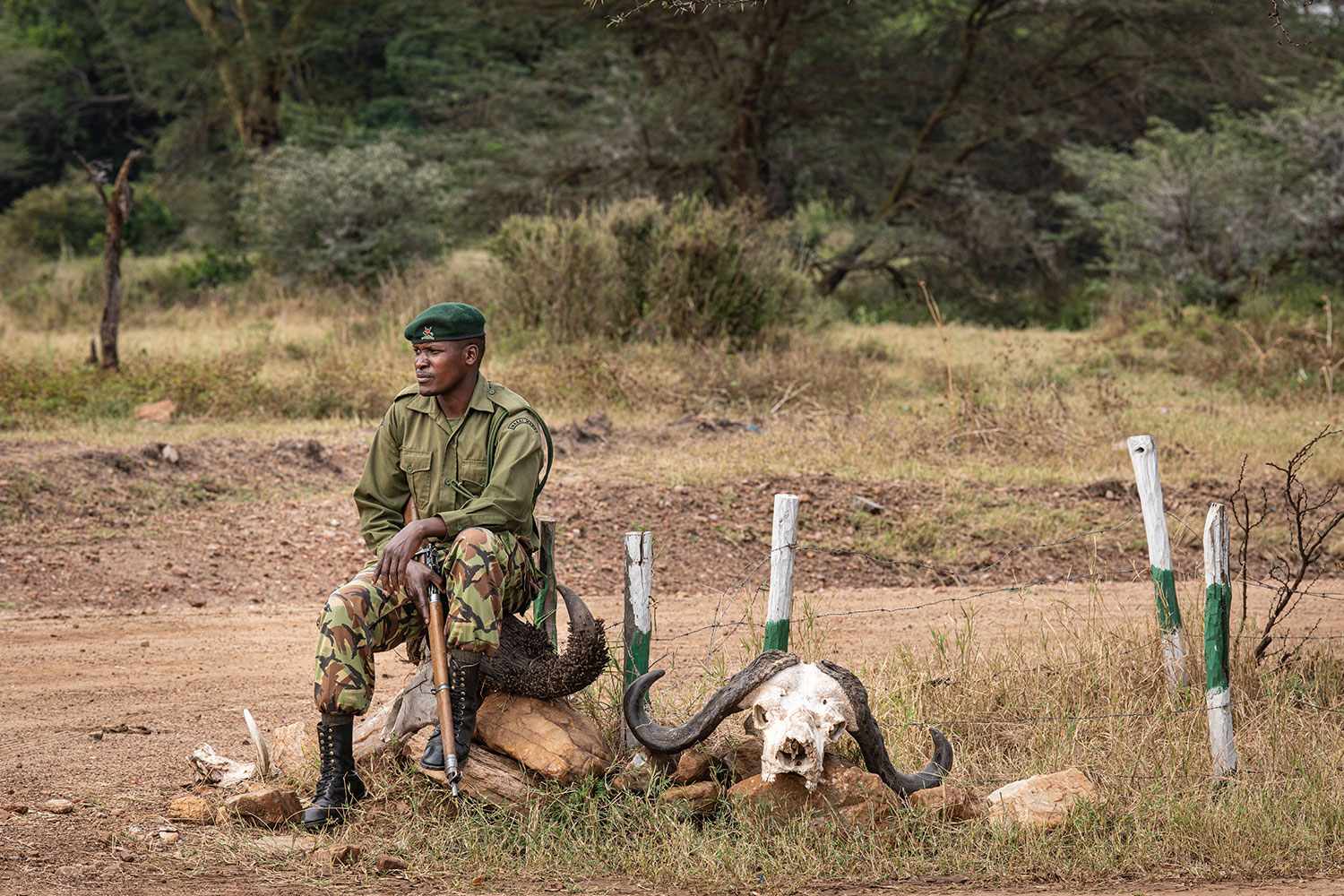 For Sergeant Philip Kursa and Constable Paul Sameri, rangers on the Masai Mara, the dire lack of tourists is doubly bad. “When we don’t have all these [tourist] cars driving everywhere, it means we have fewer eyes on the ground. It means we have to be everywhere,” they say.

Back at the Tsavo, ranger Simon Kipsang slowly picks his way through the bloodied remains, bends down and gently puts his hand on the giraffe’s head.

“This animal had no natural enemies,” he says softly. “I feel a lot of pain.” 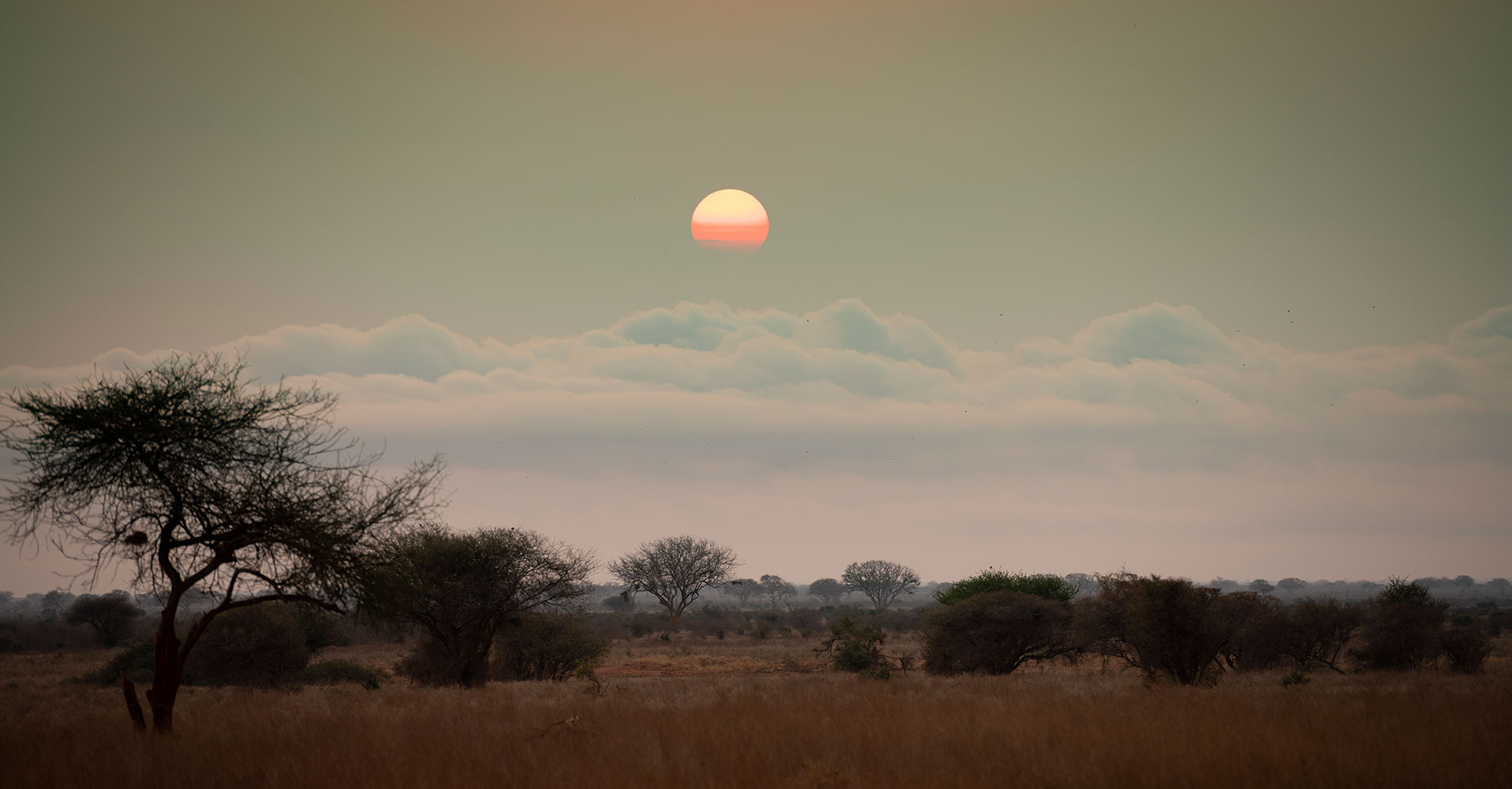