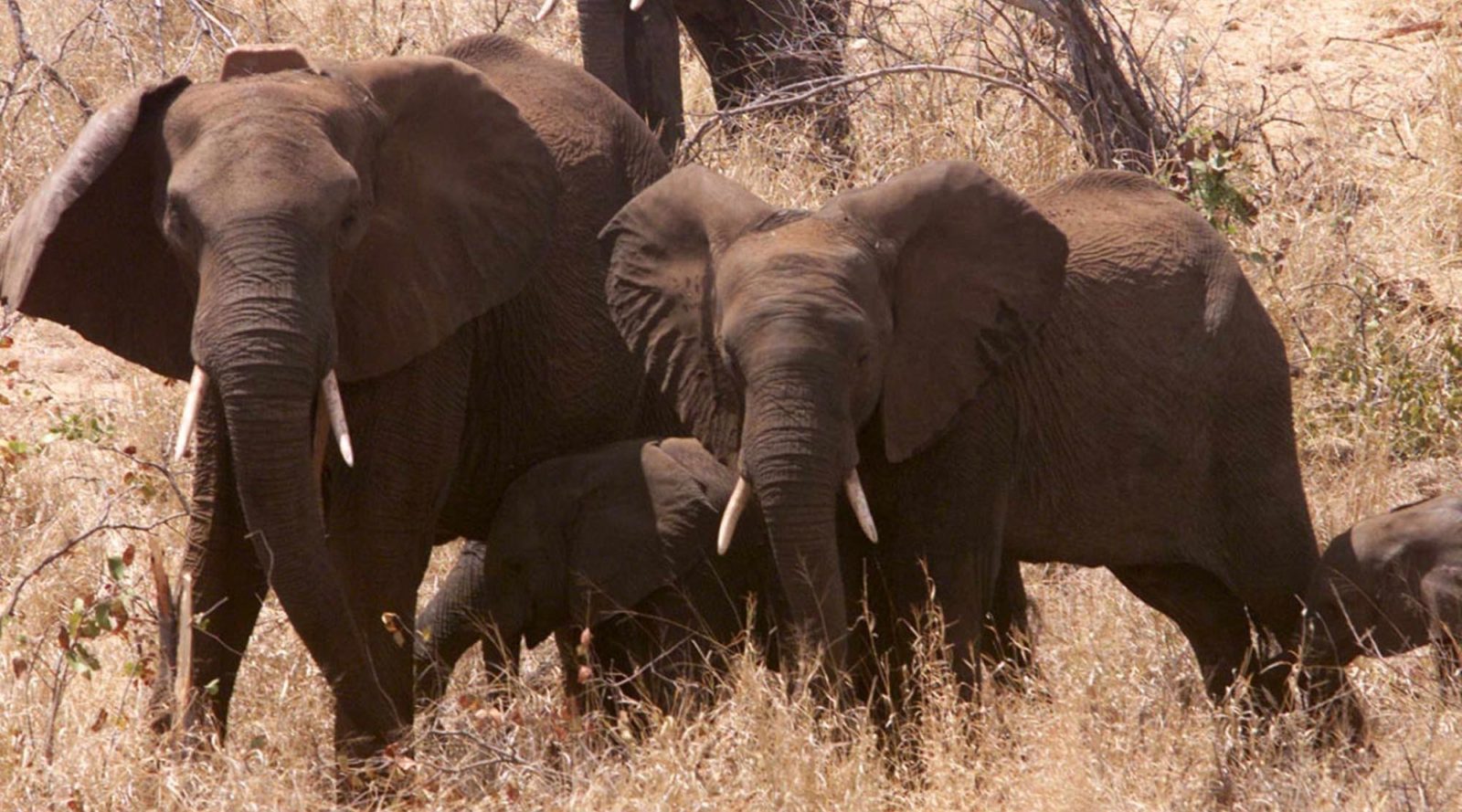 Between 2012 and 2019, Zimbabwe has exported more than 140 juvenile elephants ranging in age from under two years to seven years, almost all destined for Chinese tourist venues. (Photo: EPA / AP Pool Themba Hadebe)  Less

It’s World Elephant Day, but clearly not in Zimbabwe, where more than 140 young elephants have been ‘harvested’ by running them to exhaustion and then sold to China for human entertainment.

For years, Zimbabwean conservation authorities have flagrantly circumvented, ignored and broken international regulations and ethical objections by capturing elephant calves in the wild and exporting them to Chinese zoos, safari parks and circuses. It’s a cruel and violent practice that has no conservation value, brutalises and kills wild animals and is motivated by purely financial considerations.

The calves are darted with tranquilliser guns from helicopters before being winched into crates and onto trucks while their traumatised herd is dispersed. They are quarantined at a holding facility in Hwange National Park before being flown out of the country on cargo planes.

This is outlined in a  new report presented to CITES (the Convention on International Trade in Endangered Species of Wild Fauna and Flora) last month. It exposes the extent of this destructive trade and raises the question whether the organisation, which has often been accused of being ineffective in protecting endangered wildlife, will finally take action against Zimbabwe to stop its elephant population from being exploited by a greedy and corrupt political elite.The report notes that between 2012 and 2019, Zimbabwe has exported more than 140 juvenile elephants ranging in age from under two years to seven years, almost all of them destined for Chinese tourist venues.

During this period, the Zimbabwe Parks and Wildlife Management Authority (ZimParks) has developed harsh methods of “harvesting” young elephants from herds in Hwange.

Eyewitness reports from distraught tourists as well as numerous news exposés and objections from conservation experts and other African countries have done little to stop the practice, with the Zimbabwean government insisting on its right to sell the animals under the principle of “sustainable use” of natural resources.

From the moment of capture to their long-distance transportation, exporting living elephants involves immense cruelty and suffering that frequently result in injury, illness and death. According to the report, at least 20 Zimbabwean elephants are known to have died in the process.

Photographic and video evidence shows frightened calves being kicked and beaten during capture and quarantine at Hwange. After being denied access to the park’s holding facility in 2019, the Zimbabwe Society for the Prevention of Cruelty to Animals (ZNSPCA), complained that “the total disregard for animal welfare and the rule of law are a worrying development” and has called for “a full-scale investigation into the conduct of ZimParks and its officers”.

In 2012, only four of eight captured calves appear to have survived the journey to China. In 2015, one animal died during capture, eight are believed to have died in quarantine at Hwange and a further three during transport. The following year, at least three elephants are presumed to have perished.

Elephants are an intelligent and highly social species. Forcibly separating juveniles from their close-knit family units is exceedingly damaging, not only to the emotional well-being and physical development of the abducted youngsters, but also to the social cohesion of the broken herds that are left behind.

“In the wild, calves remain closely bonded to their natal family groups, with females never leaving their families and males only leaving at 12-15 years of age,” explains elephant biologist and wildlife director at Humane Society International/Africa, Audrey Delsink. Some of the calves selected for export are under the age when they are fully weaned from their mothers.

For those elephants lucky enough to survive the dangers and stresses of capture and transportation, life in their new homes is seldom worth living. While replicating an environment that bears even a passing resemblance to what they are accustomed to in the wild is impossible in captivity, the majority of the facilities in China don’t even meet the most basic animal welfare standards.

Of the eight calves shipped to China in 2012, only one has survived. He is housed in a “barren, restricted space, without companionship” at the Taiyuan Zoo. Photographs show him to be “emaciated, possibly due to poor nutrition or intense parasites”, with dry, irritated skin.

In 2016, ZimParks and ZNSPCA officials visiting China “expressed concern over the poor treatment and unacceptable facilities” to which Zimbabwean elephants were likely to be exposed. Despite this assessment, 35 elephants were exported during that year with the authorisation of Zimbabwe’s Minister of Environment.

The 32 elephants sold last year are kept “separated from each other in barren, indoor cells” and appear to “have undergone inhumane training by mahouts, presumably to prepare them for entertainment use”.

Experts agree that the animals face a bleak future in China.

“There is now abundant evidence that elephants do not and cannot thrive in zoos,” says Peter Stroud, a former curator of the Melbourne Zoo. “They will face a long and very slow process of mental and physiological breakdown, resulting inevitably in chronic physical and mental abnormality, disease and premature death”.

According to Kenya-based elephant behavioural expert Joyce Poole, “for elephants, being held captive for decades in a circus or in the majority of the world’s zoos is gruesome. It’s a fate worse than death.”

Many of the details of Zimbabwe’s elephant exports to China remain hidden behind a veil of secrecy and mired in allegations of corruption. The country’s government has used the sales to raise foreign currency and pay international debts under the presidencies of both Robert Mugabe and Emmerson Mnangagwa.

What beggars belief is that Zimbabwe’s ethically reprehensible abuse of its own elephant population has happened under the nose of CITES, the organisation meant to control the trade. While CITES has made some efforts to tighten regulations, Zimbabwe has repeatedly found ways to skirt them.

Since Zimbabwe’s elephants (along with those of Namibia, South Africa and Botswana) are not considered to be endangered, CITES rules allow for live exports under certain conditions. They may only be sold to “appropriate and acceptable destinations”, but Zimbabwe’s own inspectors have shown Chinese facilities do not satisfy this requirement. The report notes that the facility which received 32 elephant calves in 2019 could not provide the necessary care, housing or dietary needs of the animals and argues, “by any reasonable metric, the conditions of the transfer and housing are demonstrably inhumane”.

Scientific evidence indicates that the behavioural and social needs of wild-caught elephants can only be met in captive facilities that are “on the order of tens or, ideally, hundreds of square kilometres” in size and are located “in a climatic zone that allows year-round and 24-hour activity”. The only “appropriate and acceptable destinations” for wild-caught African elephants are found “within the species’ natural and historical range” in Africa.

A further CITES regulation requires that the export of live elephants must promote conservation efforts in their country of origin. Since the removal of calves from herds has severe detrimental impacts on their health and well-being, the exports do the opposite of bolstering elephant conservation in Zimbabwe and should, therefore, be prohibited.

The report details evidence that demonstrates that this cruel business has no conservation value. Exporting a live elephant raises around $40,000 to$60,000 (excluding the cost of capture), while a living elephant in a Zimbabwean national park “has the potential to generate well over $1.5-million through tourism in its lifetime”.

One can only hope that the report pushes CITES to finally enforce its legal mandate and compels it to stop the Zimbabwean government from brutalising its own elephant population. DM