Rhino horn being touted as curative is nothing new. For more than 2,000 years,
traditional Chinese medicine (TCM)  has enlisted the sub­stance as a cure-all, recommended for every­thing from gout to fever and even cancer. And Africa has long been the place to procure it.

But buckling under global pressure, in 1993, the Chinese government banned the domestic trade and medicinal use of rhino horn. The scientifically innocuous ingredient was largely replaced with buffalo horn, but demand continued and is now being fuelled by claims that it can be used in the treatment of a very contemporary ailment.

Most recently, the London-based Environmental Inves­tigation Agency (EIA), working to expose trade in illicit products, discovered images showing the packaging of Angong Niuhuang Wan – think of it as the ibuprofen of TCM – believed to have originated in North Korea, and advertised on WeChat by a China-based trader showing rhino horn as an ingredient.

Wildlife-rich countries such as South Africa, Zimbabwe, Zambia, Kenya and Tanzania have struggled for decades to control the poaching of
pangolin scales

, elephant tusks and rhino horns, often to feed demand in China and Southeast Asia. The wildlife tourism sector that has been nurtured has not only helped to curb poaching, it has grown into a US$169 billion industry employing some 24.6 million people across Africa, where it is often the only employer in those remote regions where wildlife thrives. 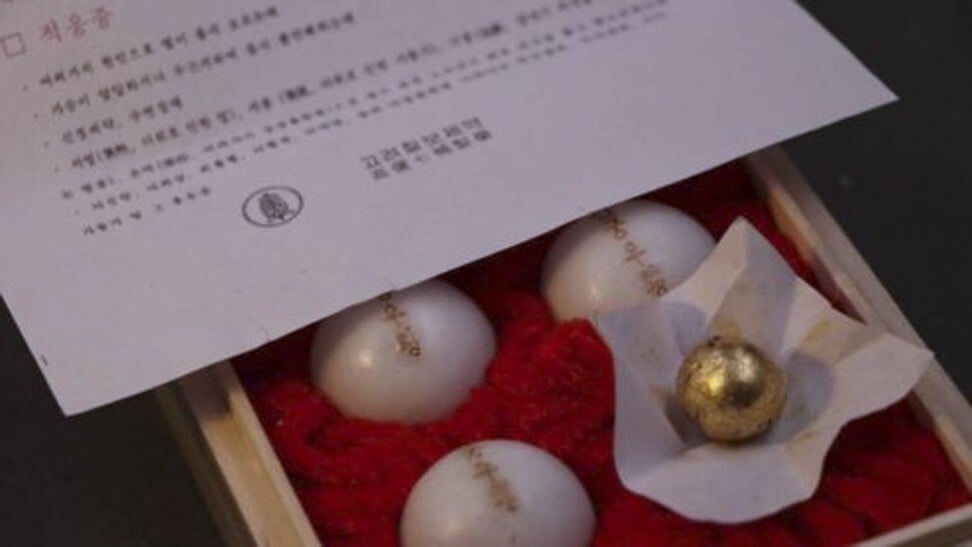 A TCM product called Angong Niuhuang Wan that is being advertised as a cure for Covid-19. Photo: Handout

Then came the virus. Borders closed, flights were cancelled, and tourism to Africa’s wildlife sanctuaries was put on hold. An African Union study estimates about 20 million jobs are at risk across the continent and govern­ments stand to lose up to US$500 billion in fiscal revenue due to the impact of the coronavirus.

And whatever leaps were made in sustainable tourism, Covid-19 has ensured that poaching is returning, with a new desperate and sinister twist: African animal parts being promoted on social media, such as the Angong Niuhuang Wan on WeChat, are being advertised as a cure for Covid-19.

While Kenya and Tanzania have managed to keep poaching under control, Botswana has recently lost nearly 50 rhinos, three in the space of two weeks in June. A report released by the Netherlands-based Wildlife Justice Commission states that large quantities of ivory are being stockpiled in Laos, Vietnam and Cambodia, which are often the entry points for the Chinese market.

Mary Rice, executive director at EIA, has recently tracked products once again moving out of Africa to China and Southeast Asia. “The networks are really sophisticated and adaptable, so if they think law enforcement is focusing on one area they will change their routes,” she says.

In protected wildlife areas, tourists would usually play an incidental anti-poaching role, providing extra sets of eyes and ears on the ground. But now, “it’s like we’ve suddenly gone blind”, says Nairobi-based Dr Timothy Wittig, head of intelligence and analysis for United for Wildlife’s Financial and Transport task forces. “People are realising how much they rely on tourism – and not just for money.”

“[In Kenya] most companies have either put their staff on pay cuts, ranging from 30 to 50 per cent, or on unpaid leave,” says Gerard Beaton, regional operations director of Asilia Africa, which has camps in Tanzania and Kenya. Some are currently open to domestic travellers but for others, the earliest they are considering opening is October.

Climate change will cause polar bears to go extinct by 2100: study

“If people are getting a reduced salary it increases the temptation for corruption,” says Krissie Clark, co-founder of PAMS Foundation, a conservation and wildlife NGO that played a role in dismantling poaching units in Tanzania. Between 2009 and 2014, the country lost about 60 per cent of its elephant population, but following a government anti-corruption drive and intelligence-led investigations, poaching began to decline.

“A combination of political will, money and commu­ni­ties cooperating, that’s what cracked it,” says Clark, who is now worried these conservation efforts will unravel as tourism declines and demand for product in China conti­nues. Despite heavy penalties for poaching in Tanzania – imprisonment in some cases – desperation is real, and the irony that the pandemic that cost them their tourism is the same pandemic that could wipe out their progress is lost on no one.

“We’ve already seen an increase in snares,” says Clark. “I don’t know if this is just a coincidence or whether these are the first signs of economically difficult times and people are looking for food sources, but I am expecting a resurgence in poaching.”

There is going to be an effort to take advantage of the situation from a commercial poaching perspectiveRichard Vigne, managing director, Ol Pejeta

Richard Vigne, managing director at Ol Pejeta, a private conservancy in Kenya that has a thriving rhino population, says he is hearing “a lot of chatter” right now. “People we know, who have been involved in poaching in the past, are suddenly active at night when they weren’t before,” says Vigne. “There is going to be an effort to take advantage of the situation from a commercial poaching perspective.”

In South Africa, however, Minister of Environment, Forestry and Fisheries Barbara Creecy said in a statement that fewer rhinos were poached in Kruger National Park in April this year than in any single month since September 2013 – and by June, the numbers were still decreasing.

“South Africa has been under strict lockdown, with movement in and around the country being carefully controlled, which could explain the reduc­tion in poaching. During the level-five lockdown, the sale of alcohol and cigarettes was banned and people could leave their homes only to purchase groceries. 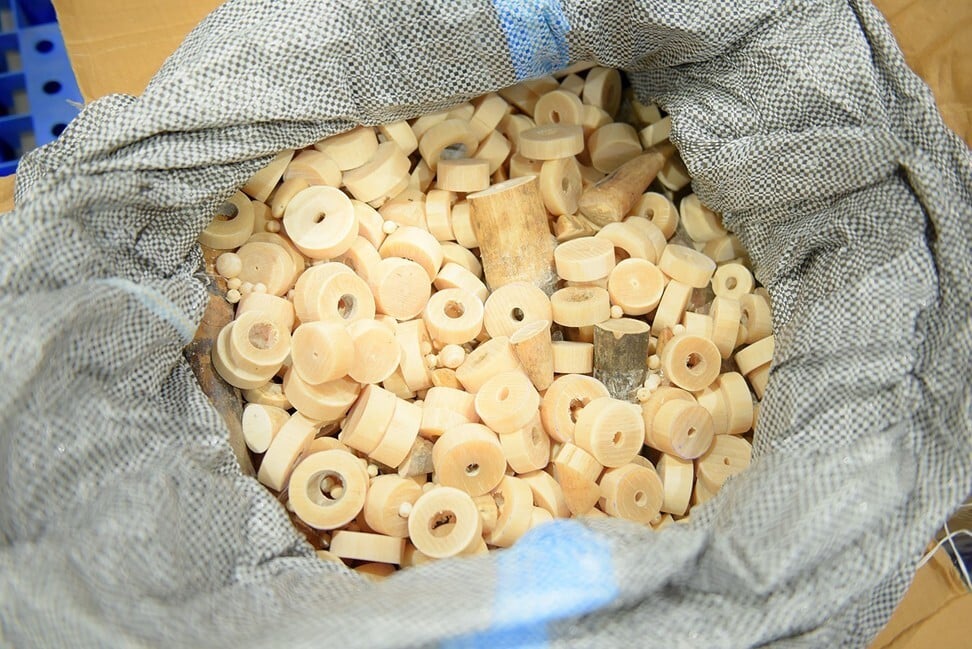 Products made from ivory seized by customs officials in Hanoi, Vietnam, in September 2018. Photo: AFP

“There is now mounting concern over the prospect of an onslaught of poaching when the lockdown lifts. Save the Rhino’s intelligence has led the London-based conservation charity to believe that the lockdown provided time for criminals in South Africa to recruit more people and build up resources.

One major challenge for poachers, however, is the transport­ation of products to Asia. With lockdowns in place, flights cancelled and movement restricted, shifting significant volumes of rhino horn, ivory or pangolin scales is far from straightforward.

“We know stuff is coming up from southern Africa and heading north,” says Rice. “Shipments are still moving, because although human travel has stopped, the shipping companies are still operating.”

United for Wildlife, a coalition of global conservation groups, and the Wildlife Justice Commission have also con­firmed that they have tracked shipments leaving Africa bound for Asia. “My assessment is that there are some diffi­culties getting products into China from Southeast Asia, because China has been rigorous in its lockdown,” says Wittig.

And the closing down of the formal economy, which is often used as a cover to transport illegal products, is hampering the movement of goods. While there are advantages for traffickers in such situations, increased stockpiling also presents an opportunity for law enforcement agencies to close in on larger quantities of product left in one place for longer periods than usual. 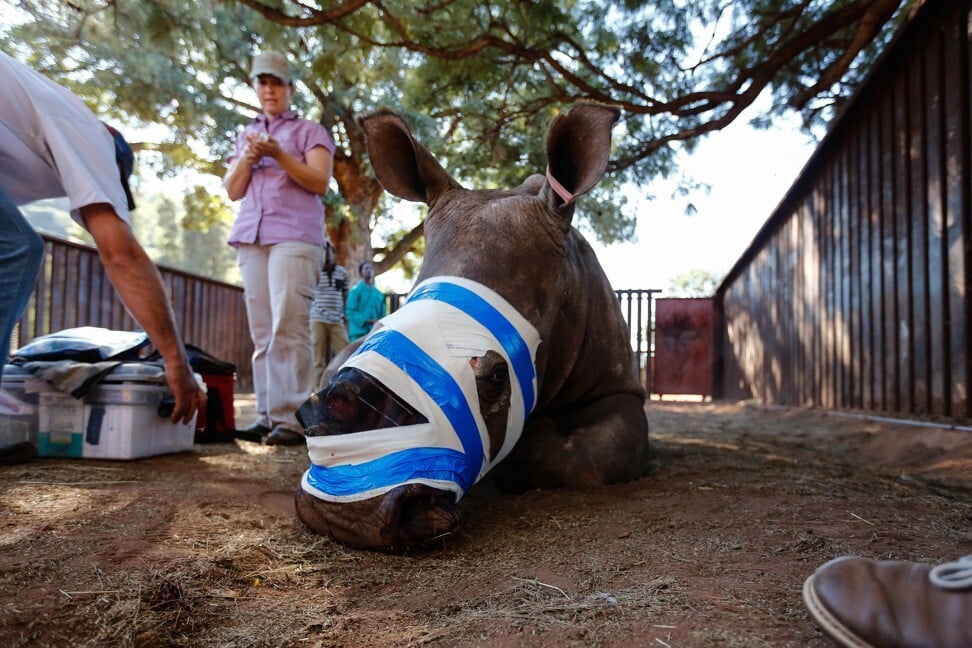 Hope the rhino recovers from facial-reconstruction surgery in May 2016, in Limpopo, South Africa, after her horn was hacked by poachers. Photo: Getty Images

“While banning wild meat and shutting down markets and farms, the [Chinese] government has also been aggressively promoting traditional medicine as a cure for Covid-19, and exporting it to vulnerable places like Afghanistan and Pakistan,” says Vanda Felbab-Brown, a senior fellow at the Brookings Institution, a Washington-based think tank, and author of The Extinction Market: Wildlife Trafficking and How to Counter It (2017).

China’s wildlife protection law was adopted in 1989 and has seen little change since. In January, the Chinese government announced there would be a temp­orary
ban on wildlife trade

, then, in late February, the Standing Committee of the National People’s Congress brought forward a decision to prohibit the commercial trading and breeding of terrestrial wildlife for food. But while this law addresses human consumption, it does not address the use of wildlife as traditional medicine, ornamental items or pets.

More recently, the Chinese government shut down wildlife farms, another indication that it is taking this pandemic more seriously than 2003’s severe acute respiratory syndrome (Sars). It was reported that the government had also removed pangolin scales from the Chinese Pharmacopoeia but, according to a report published by the EIA, in a 2020 edition of the official reference book obtained by the organisation: “pangolin scales are still listed as an ingredient in patent medicine formulas […] Meaning the government continues to legitimise and promote the medicinal use of pangolin scales”.

A further concern is whether these laws and policy changes will have any longevity.

“The changes are more robust than what we saw after Sars, when wildlife markets were banned but it tapered off within two or three years,” comments Felbab-Brown. 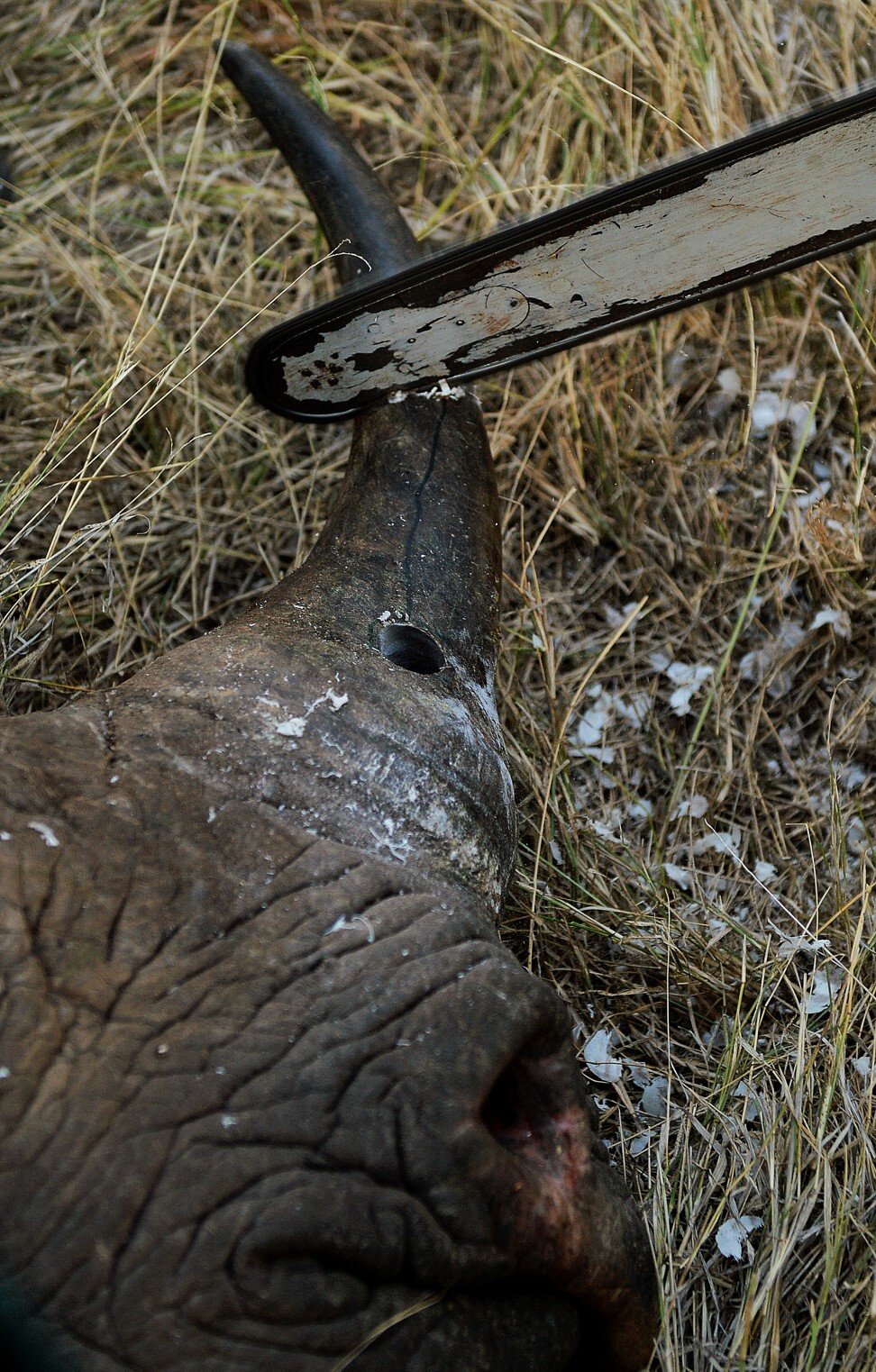 A rhino named Songa has his horn cut with a chainsaw to fit a tracking device at Kenya’s Lewa Wildlife Conservancy, in August 2013, to help combat poaching. Photo: AFP

A 2014 survey across some of China’s largest cities showed that 52.7 per cent of people agreed wildlife should not be consumed, which was a significant increase compared with 2004’s 42.7 per cent. In 2018, when Beijing repealed a 1993 ban on the sale of rhino horn for medical use, there was an outcry on Chinese social media.

“What’s going to happen will be based on what we do next,” says Wittig. “If we’re able to instil the message that Covid-19 came from the illegal wildlife trade, then there’s a big opportunity. This feels like a crossroads moment.”

For countries such as Botswana, meanwhile, the only thing to do is scramble to save as many rhinos as possible. In an attempt to limit poaching, the Department of Wildlife and National Parks there is dehorning rhinos and moving them into safe enclosures. With no indication of when tourism will pick up again, the prospect of further waves of infection, and a possible increase in demand for rhino horn for use in concoctions being peddled as Covid-19 cures, conservation­ists can only bide their time.

“It’s imperative to minimise the chances of another pandemic,” says Felbab-Brown, “because if another one begins soon, local governments won’t have capacity to help at all.”

China’s healthcare sector was one of the best-performing equity classes globally in the first half of 2020. Get a comprehensive industry review and insights on Covid-19 induced market shifts with the China Healthcare Report, brought to you by SCMP Research.
Sign up