Suspected Hutu militiamen have killed 16 people, including 12 rangers, in the Virunga national park, a Democratic Republic of the Congo government official has said, in the deadliest attack in the park’s recent history.

The park in eastern DRC, home to critically endangered mountain gorillas as well as hundreds of other rare species, has faced repeated incursions and attacks by local armed groups.

About 60 fighters from the Democratic Forces for the Liberation of Rwanda, a Hutu rebel group, ambushed a convoy of civilians that was being protected by 15 rangers, said Cosma Wilungula, the director of the Congolese Institute for Nature Conservation. Many others were seriously injured, he said.

There was no immediate confirmation from the Virunga park of the incident or casualties.

The park has been repeatedly hit by violence. It was shut to tourists for eight months in 2018 after a series of attacks on staff but reopened after a thorough review of security precautions and reinforcement of the 700 rangers deployed to keep animals and visitors safe.

The park, in North Kivu province, has a reputation as one of the most dangerous conservation projects in the world. It faces multiple security threats including illegal charcoal production, smuggling and poaching, as well as from the Mai Mai militia.

Founded in 1925 by Belgian colonial authorities, the park struggled in the immediate aftermath of the country’s independence in 1960 but flourished under President Mobutu Sese Seko, who took power in 1965.

The park suffered further during the civil war that followed Mobutu’s chaotic fall in 1997. Virunga’s mountain gorilla population declined to 300. It has since risen to more than 1,000, and the numbers of other animals such as forest elephants are also rising. 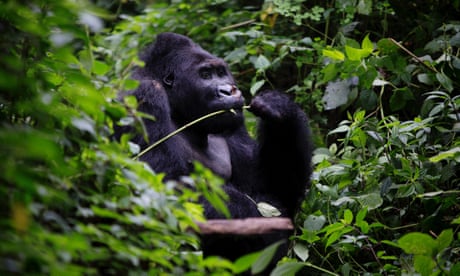 Gorillas, charcoal and the fight for survival in Congo’s rainforest

In 2007 a partnership was established between charities funded by private donors, the EU and the Congolese wildlife service. Emmanuel De Merode took charge and implemented a wide-ranging overhaul.

The rangers, who are recruited from nearby villages, are paid a monthly salary of $250, a sizeable sum for them. Initiatives have focused on nearby communities, with micro-loans and hydroelectric power projects to boost the local economy.