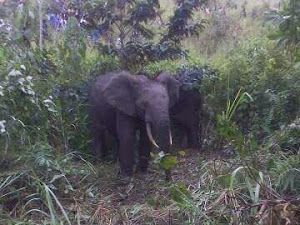 Elephants from Upemba Park destroyed large areas of the fields in the Mulongo chiefdom, in Malemba Nkulu territory in Haut-Lomami province.

The alert was launched on Sunday 2 February by an elected official from this province, when these pachyderms entered the villages of Kabala, Lwandwe and Seya not far from the city of Malemba Nkulu.

According to local sources, the population, whose main activity is agriculture, fears famine; this drama occurring a few weeks before the harvest.

According to the provincial director of the Congolese Institute for the conservation of nature (ICCN), the curator of Upemba Kundelungu park is en route to the territory of Malemba Nkulu to organize the repression of these elephants.

According to testimonies collected on the spot, the first to alert the opinion on the presence of the elephants in this chiefdom is the great chief Mulongo. According to the latter, several areas of the fields were ravaged. The victimized population attends powerless.

Residents worry and fear that these animals will not reach their homes, in search of pasture. Which would endanger their lives.

The great chief Mulongo indicates that it is not for the first time that his citizens are confronted with this hard test. According to him, all the calls made to the authorities of the ICCN, to organize the refoulement of his animals, were unsuccessful.