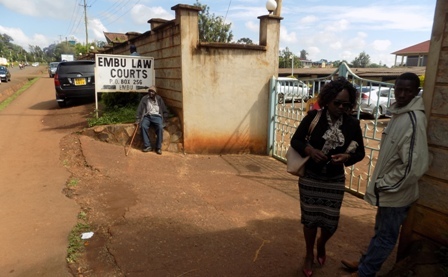 An Embu man found with an elephant tusk has been jailed for five years after failing to afford a Sh1 million fine.

Rutere Njeru and Ephantus Njagai were arrested while in possession of an elephant tusk weighing about 4kg on December 12.

They appeared before magistrate Antony Kwambai last Friday. Njeru pleaded guilty to the charge Njagi denied the offense and was released on Sh300,000 bond.

His case will be mentioned on December 30 and heard on March 19 next year.

The duo were charged that on December  12 this year at Kiungu village of  Rutune sub-location in Embu North subcounty they  were found in possession of  the tusk whose street value was estimated at Sh300,000.

Njeru pleaded guilty to the offense and asked for mercy, telling the magistrate that he would never repeat the offence.

He said if jailed his family which depended solely on him would suffer.

The court was told that following increased poaching in the area and after a tip-off, a security operation was mounted in search of the perpetrators of the crime who were apprehended.

The magistrate said the offense was very serious. People like him were contributing to killing of elephants.

He said so as to serve as a lesson to others, Njeru should pay the fine of Sh1 million or in default serve five years in jail.

The convict could not afford the fine and was escorted to Embu GK Prison to start serving the sentence.