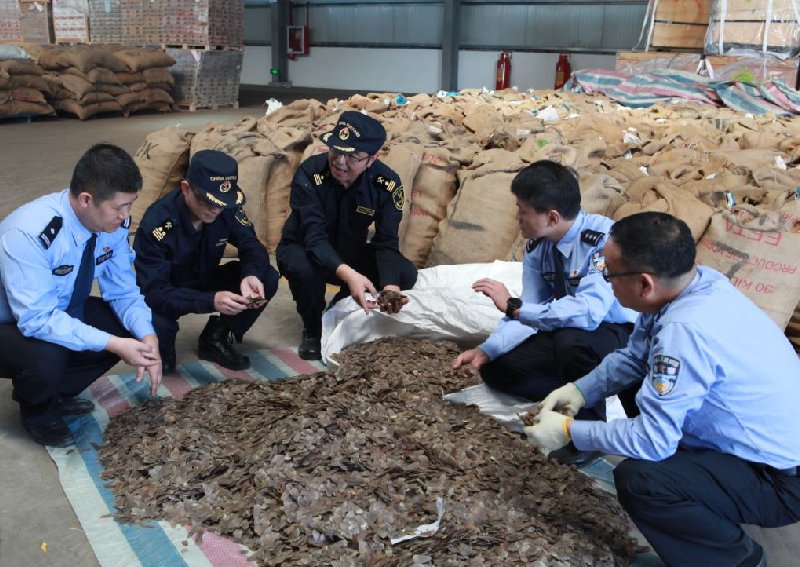 Given that only 400 to 600 grams of scales can be extracted from each pangolin, a nationally protected species, the plate-like scales seized in Wenzhou and smuggled from Busan, South Korea, in batches since November last year were estimated to be extracted from around 50,000 pangolins.

It is believed to be the largest haul of smuggled wildlife products in recent years, China Central Television reported.

In September, customs authorities in Wenzhou found that two people from the city were selling pangolin scales, which are often used in traditional Chinese medicine, in a black market in the Guangxi Zhuang autonomous region.

At the end of October, customs received a tip that a batch of scales would be smuggled into China and those two people would be involved.

“A man surnamed Cai purchased pangolin scales in Nigeria and entrusted an overseas smuggling group to transport them to Busan first. Then, the man’s two partners in Wenzhou hired another group to deliver them to Wenzhou via Shanghai,” said Feng Chenxue, an Hangzhou Customs official.

The containers with scales, mixed with slices of ginger, were unloaded at a wharf in Shanghai and then transferred to Wenzhou where local customs authorities seized the containers and caught the suspects, according to Feng.

“The smuggled pangolin scales were wrapped with layers of ginger slices in bags, which makes them hard to detect during routine spot checks,” said Chen Ling, a policeman from Wenzhou Public Security Bureau.

The cost of pangolin scales overseas is about 80 to 150 yuan (S$15 to S$29) per kilogram, while the selling price in China could reach 800 yuan as the scales are believed to be beneficial for health, Feng said.

Hangzhou Customs said they will continue working with local public security authorities to crack down on the smuggling of wildlife and endangered species into and out of China.