Read this one with a large pinch of salt. KS 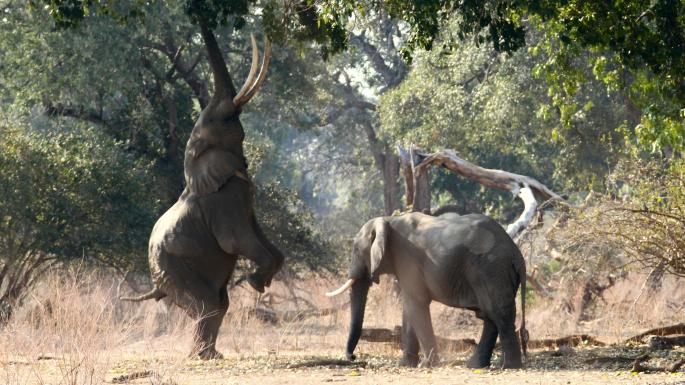 Lions have stopped eating their kills in Zimbabwe’s most drought-ravaged park because they are already too full.

The parched plains of Mana Pools national park are so crowded with dead and dying animals that predators can afford to take their pick of the prime cuts. Even scavengers such as hyenas and vultures are too bloated to feast.

“Predators are overwhelmed by the sheer volume of death,” Steve Bolnick, who has been a guide in Mana Pools for more than 30 years, said. “Scavengers can no longer cope with their job of cleaning up the bush. For the first time I have seen hyenas jump over fresh kills and move on.”

Lions continue to hunt out of instinct but often do not even touch their prey, with carcasses left to the very bottom of the bush food chain: the blowflies.

The seasonal rains are already late to the Unesco world heritage site on the Zambezi river and there is a risk they will not come in any meaningful volume this year. On the back of poor rainfall in four of the past five years, there is precious little growing.

The four pools after which the park is named — mana means “four” in the Shona language — have all but dried into treacherous clay that has trapped thirsty animals. Long Pool, normally 2.5km long, has been reduced to a 3 sq m puddle of mud.

The worst affected grazing animals, including hippopotamuses and buffalo, are attempting to soothe their hunger by browsing, an entirely new eating behaviour in which they consume leaves and flowers, which their bodies struggle to digest.

The park’s most celebrated animal, an elephant called Boswell, has also adapted his behaviour in response to Zimbabwe’s worst drought in four decades. The large bull is well-known to tourists for his habit of standing on his hind legs like a circus elephant to pluck the best fruits high up in trees with his trunk. Mr Bolnick has recently observed him breaking off branches to throw to other famished elephants.

Groups of up to 15 elephants started following Boswell to scavenge whatever he was dropping, Mr Bolnick said.

Two hundred elephants are thought to have perished in recent months. With most of the indigenous trees and grasses that feed herbivores having been hit by the drought, the authorities began supplementary feeding, which has divided opinion.

Critics say droughts are a natural means of managing populations; supporters say the Zambezi valley has already lost more than half its elephant population to poachers in the past two decades.

Munyaradzi Dzoro, a parks agency wildlife officer, acknowledged that delivering food was against normal policy. “We used to say nature should take its course, but we are not sure when and how we will receive the rain,” he said.

The drought in southern Africa is not affecting only animals. The water flow at Victoria Falls, 276 miles from Mana Pools, is at its lowest for 24 years, and an estimated 11 million people in the region are threatened with hunger, the World Food Programme has said.