The bloody side of Mara conservancies

Villagers routinely wake up to find all their goats and cattle killed by wild animals, but they are jailed if they injure any animals in self-defence.

• The constant run-ins with wild animals from the game reserves and the conservancies nearby is now threatening their survival.

•Today, a sack of maize in markets in the area retails at Sh4,000 owing to continued destruction of crops by the elephants and gazelles 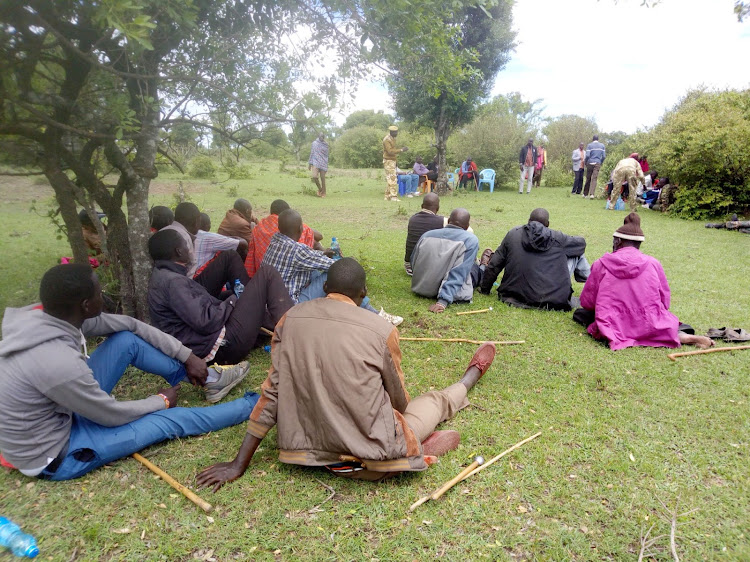 CONFLICT: A section of Ololongin during a baraza with Kenya Wildlife Service officials. They are lamenting constant destruction of their property by wild animals
Image: MAGATI OBEBO

An uneasy calm settles in the dusty Ololongin and Kirindon villages in Transmara West, Narok County, as one walks by.

A thicket stretches deep into the neighbouring Maasai Mara Game Reserve, giving a regaling scenery to one visiting the region for the first time.

But beyond the veneer of beauty is pain and fear.

Many of the Maasai community members are angry.

The constant run-ins with wild animals from the game reserves and the conservancies nearby is now threatening their survival.

At Ololongin shopping centre, shops open late in mid-morning with villagers forced to wait until lions and elephants leisurely saunter back into the park before they go to work.

This means parents with school-going children have to wait for the animals to vanish into the forests before they release them to head to classes.

The going can especially get tough when one wakes up in the morning to find all his goats killed by lions.

At the edge of the forests, youth often keep vigil but still the marauding cats sneak in from vast reserve and conservancies nearby to wreak havoc.

Each villager here says they have lost one or two of their cows, goat or sheep to a lion.

Already, dozens of villagers in the area say they are yet to get word when the Kenya Wildlife Service will compensate them long after they filed complaints.

Though they make a conscious effort to live side by side with the animals, the delay by the government to compensate them makes them angry.

“You can’t stop being angry especially when you wake up in the morning to count carcass in the pen or get your maize has been eaten up,” said Ben ole Keyian, a resident.

The pain in the delayed compensation is captured by two separate families who, two years down the line, are yet to receive a penny after they lost their loved ones to a hippo and crocodile attacks respectively, in 2017.

Two years later, the families say they have been abandoned.

A fortnight ago, a farmer in the area lost five heads of cattle and several sheep in a single raid by a pride of lions from the Mara.

Ole Suntu Kimongo  says before the incident, he had also lost five goats and two sheep to  hyenas at night.

It is not any better for his neighbour, Dominic Konjela, who last week lost two acres of his blossoming maize to unrelenting brood of zebras and gazelles from the wild Mara. 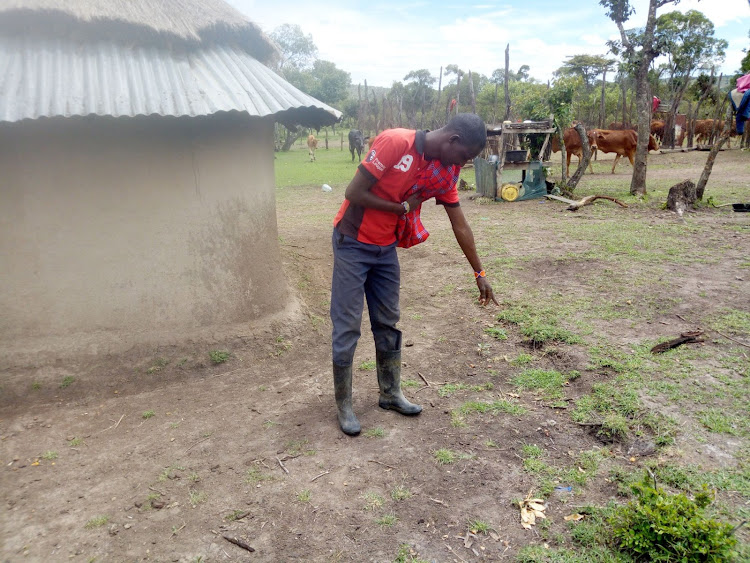 At Stephen Sigeni’s farm were fresh foot prints of an elephant which roamed in the compound the night before.

Sigei said the mammal had had cut a barbed wire fence and walked into the compound, scaring away his seven dogs before slightly shaking his rickety house.

“We keep repairing the fences at our own cost, nobody will come here to compensate you, you are on your own,” he said.

At Kirindon area, some band of youth, tired of reporting to KWS of the constant raids by the wild animals, shot and killed an elephant using poisoned arrows.

He said had the government taken some action, the conflict would not be there.

He says the residents may have nothing to eat or use to educate their young ones if the situation persists.

“You have come and seen for yourselves. That was a maize farm which was destroyed yesterday and there is a potato farm which also fell to the elephants,” he said, pointing at a farm of his neighbour.

Today, a sack of maize in markets in the area retails at Sh4,000 owing to continued destruction of crops by the elephants and gazelles, Sigei told the Star.

The farmers say they cannot plant other crops owing to the destruction.

The animals also roam from conservancies such as Oloisuk, Nookishu, Mara North and Lemek to cause havoc, the farmers said.

At Ntulele sub-location, for instance, Julius Kayuni narrates how he escaped death by a whisker last week when a hippo he was trying to drive away from his farm nearly mowed off his legs.

“It’s a delicate balance between survival and tending to your wives and children,” he told the Star during a baraza convened recently by Transmara Kenya Wildlife Chief Warden Phillip Cherop and Kirindo DOHenry Khahesi.

At the forum, the residents lamented of the constant, slow response by the wardens whenever animals raided the farms.

They said a whole contingent can come to rescue an elephant trapped in the mud but not one will appear when an entire village is terrorised by a lion on the loose.

“For them (KWS), the life of an animal is important than us. Nobody comes when you’re besieged but let them hear that an elephant has been stabbed, you will see a whole camp here,” said Sigei.

He said says they also have one gripe with KWS regarding fines imposed on them by KWS when their animals strayed into the wild.

They said one cow attracts a penalty of Sh1,000. “Nobody has bothered to ask them to pay us when the wild animals roam in my homestead giving many sleepless a night,” posed Sigei.

Kimerok village elder Samson Ole Mugenya asked the government to do everything in its power to tackle the human and wildlife animal conflict.

He said since they have advised their youth against killing the animals it us upon the government to ensure it locks away the animals in the parks.

“Since we have reined in on our Morans from killing the animals, what stops you (KWS) from controlling the movement of these animals that roam around?” He posed.

Following the concerns, the residents now want an electric fence to be put up a twenty kilometer electric fence along River Mara to stem the growing attacks.

While presenting the petition, Nelson Tukuyo, said as long there is no fence, the conflicts between the villagers and animals will not subside soon.

He also said those near the borders of the reserves should be provided with barbed wire to fence themselves in away from the wild cats.

“It is our hope that this can reduce some of the losses we are incurring,” he told the KWS officials, led by Cherop.

In the face of the ongoing wildlife human conflict in the area, Kenya Wildlife Service says it is up to the task of addressing the problem.

Transmara Chief Warden Philip Cherop, however, says occasional delays in budgets to pay for compensation have been there but they had always been addressed.

“Even with these accusations being made that we are slow, there is also the need to acknowledge that we are trying to address the residents’ plight by creating a barrier between them and the animals,” he told the Star.

He also said plans are underway to provide spotlights as a stop gap measure to the farmers to use in scaring away the animals from their farms.

“This may be a temporary solution as we look for long-term plans to address this conflict and we want our people to know so,” said Cherop.

During the baraza at Ololongin, Cherop said the KWS will always be committed to the safety of the residents .

He said the notion that the agency always priortises animal lives to those of human was false.

“All through the past and present engagements, KWS has not put the lives of animals first but even then there should be no wanton killings of the animals when we are a call away,’ he told the Star.

He promised regular patrols by the KWS wardens to stem further loss of lives in the area.