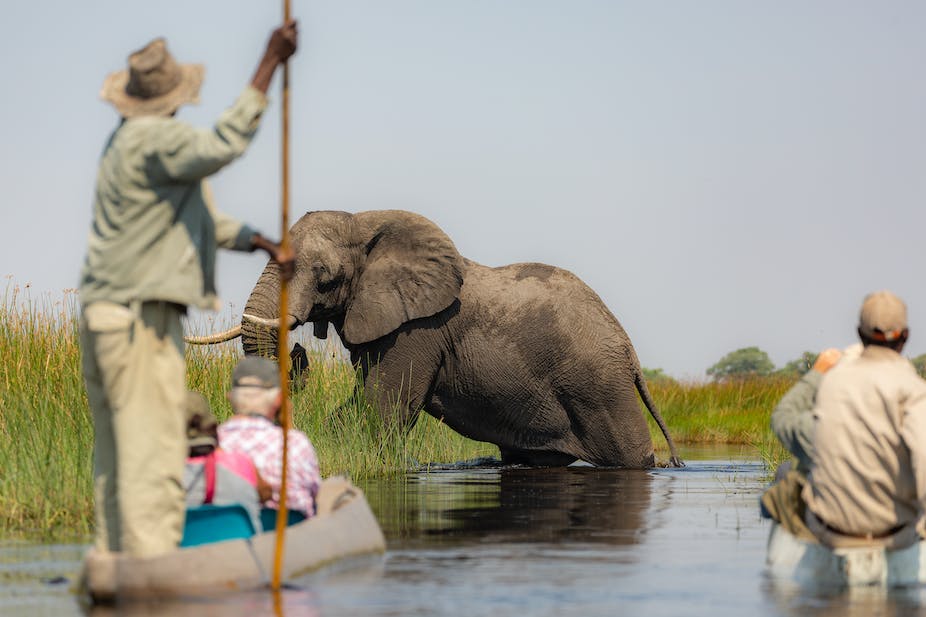 The Okavango Delta in northern Botswana is a mosaic of water paths, floodplains and arid islands. The delta sits in the Okavango river basin, which spans three African countries: Angola, Namibia and Botswana.

Because it’s an oasis, in a semi-arid area, it hosts a rich array of plants and attracts a huge variety of wildlife.

As a unique ecosystem, in 2014 it was placed on UNESCO’s World Heritage list and it is an iconic tourist destination, which generates 13% of Botswana’s GDP. 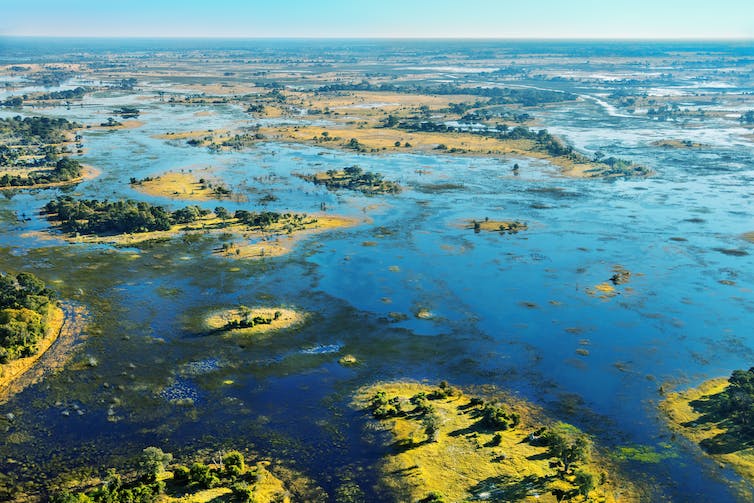 But it’s a fragile natural area. It’s controlled by deformations of the Earth’s crust over a long time (thousands to millions of years) and by annual water flows and evaporation. The size of the flooded delta from year to year varies between 3,500km² and 9,000km² because of weather fluctuations which control its water supply.

Any change to the processes that form the delta will have an impact on the wildlife and local economic activities. Its grassy floodplains are food for grazing animals in the dry period. Losses of this habitat will cause declines in wildlife and livestock. It’s therefore imperative to understand what creates and sustains the delta for the future management of the system.

We have conducted several studies that cover how the Okavango basin was formed and the way dissolved chemicals are withdrawn from the delta’s surface.

The dynamic history of the Okavango Delta’s waterways and floodplains tells us that the interplay between geology, water and plants makes the delta resilient, but vulnerable.

Some imminent changes are expected that are of concern. One is higher temperatures, which will boost evaporation and transpiration. Another is the pumping of water for irrigation in Namibia. Both of these changes will reduce the water needed to sustain the delta’s floodplains.

The Okavango Delta is a generally flat area which is under constant change with phases of flooding and drying. A variety of geographical and natural processes have formed it and sustain it.

It’s in a depression which was created by fault lines cutting the Earth’s surface. This means water flows into it. The fault lines are created by the spread of the East African Rift – a major fracture, created over millions of years, which crosses the eastern part of Africa.

The origin of the islands in the delta is attributed to two mechanisms: the construction of termite mound spires; and formation of elevated ridges where former channels deposited sand. Both act as the starting point for vegetation to take root. 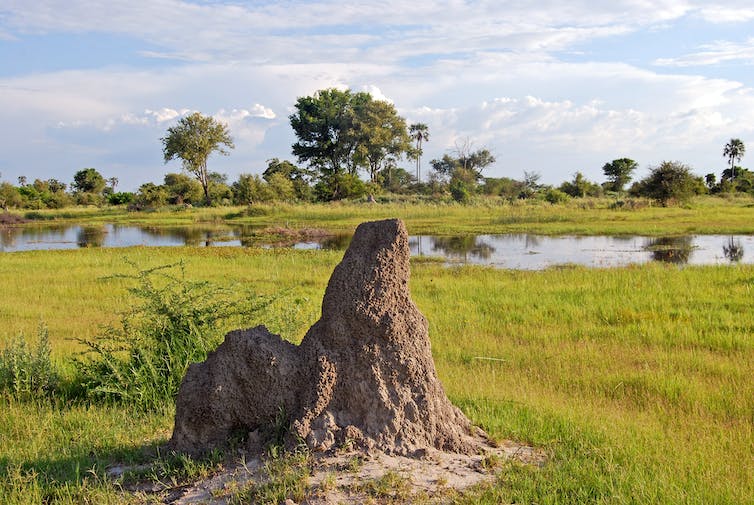 The water supply comes from the Cubango and Cuito rivers in Angola. This reaches the delta between March and June and peaks in July. There’s also local rainfall in the Okavango area from November to February (about 450mm a year) which adds to this.

About 98% of the water that goes into the delta is eventually lost through evaporation and plant transpiration, when water moves through the plant and evaporates from leaves, stems and flowers.

Even though the subtropical sun generates intense evaporation, the delta’s water is fresh, not salty. This is surprising because water samples from the middle parts of the islands have very high chemical and salt concentrations. This chemical concentration occurs in thousands of islands.

The reason the water is fresh is that trees on the edges of the islands have created a barrier of natural filters between the inner part of the islands and the floodplain.

The Okavango Delta is continually being shaped by complex interactions of natural processes. If something happens to change the balance of these processes, it could destabilise the system.

The most important dynamic for the delta is inflowing water. The two main rivers in Angola, the Cubango and the Cuito, join to form the Okavango river, which feeds the delta. These two rivers are hydrologically quite different. The Cubango, to the west, first flows rapidly down steep, narrow paths characterised by incised valleys, rapids, waterfalls and valley swamps. The Cuito, to the east, with shallow valleys and large floodplains, gets its water from groundwater seepage.

The manipulation of these rivers – in the form of dams and irrigation – will affect the water flow and change its annual distribution. Both of these form part of current and future development planning in Angola and Namibia.

A decrease in water supply will affect the vegetation growth and the wildlife. An increase in water would inundate the islands and could dissolve the salts at the centre of them, releasing chemical elements that would change the water quality.

In addition to declines in water flow induced by global warming and human activities, ground deformation is also happening because of shifting continental plates. This could change the paths of the water flowing by changing the ground slopes. Measurements of ground deformation with Global Positioning Systems displays reveal very slight changes in local slopes that can modify the paths of the water flowing to the delta.

To sustain the Okavango Delta it’s imperative that management integrate all the components of the system. All governments are involved and must integrate scientific expertise, from upstream catchment to downstream Delta