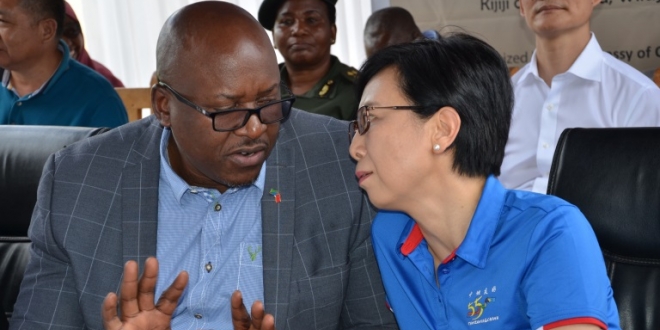 The Chinese Embassy in Tanzania has come up with an initiative to capacitate residents living around Mikumi National park with essential skills and equipment on smart farming so as to fight poaching and improve wildlife protection.

Speaking during the event to hand over various agriculture inputs to the community at Mhenda village in Kilosa district, Morogoro region deputy minister for Natural Resources and Tourism Constantine Kanyasu said that community engagement in wildlife protection is a key area.

Kanyasu said that the Chinese embassy has donated 2500 kg of maize seeds, sunflower seeds (150kg) and 800kg of peas seeds to enable the community venture into agribusiness to improve their income. “Apart from the seeds, the embassy has also donated 13 pairs of security clothes, 13 pairs of boot shoes, a desktop computer and a television which will be used to train the residents in best farming practices…this will transform the villagers mindset and enable them embark on farming for their development,” he said.

The deputy minister further hailed China for their support to the community as well as its decision to ban elephant tusks market. Earlier, Chinese ambassador to Tanzania Wang Ke said that experts from China will train the community on smart agriculture by using modern technology as well the importance of protecting wildlife.

According to her, with the use of technology, farmers can increase their productivity by doubling their yields something which will encourage them to shun poaching acts. Mhenda Ward councilor Ali Athuman commended the Chinese embassy for their support vowing to ensure that the training brings positive impacts in the area. Recently, the minister for Natural Resources and Tourism Dr Hamisi Kigwangalla said that the government through the Nation’s Taskforce Against Poaching (NTAP) is preparing zero poaching campaign which is aiming to eradicate poaching businesses by 2024.

The minister said that despite efforts by the government authorities, there are still some challenges in curbing poaching, citing increased demand for government trophies in the illegal export market. He decried increased illegal human activities within wildlife areas, increase of human wildlife conflicts, rising illegal trade of bush meat, increasing demand of charcoal in and outside the country, poverty and low understanding among Tanzanians as some of the impediments of anti-poaching drive.`