The Ivory Coast’s dwindling rainforests could be “wiped out” under a new law that will see legal protections removed from thousands of square miles of classified forest and unprecedented power handed to industrial chocolate manufacturers.

The majority of the Ivory Coast’s 7,700 square miles of protected forests are considered heavily degraded, with levels of deforestation at 75% or more. These will be turned into “agro-forests” under the control of international companies including Olam Cocoa and Siat. National parks and forests that are considered relatively intact will remain protected, according to the law, while a middle category will be gradually restored.

Campaigners say it is crucial to preserve the remaining parts of these already ravaged forests. “We are opposed to further deforestation of these areas,” said Youssouf Doumbia, president of the Ivorian Observatory for the Sustainable Management of Natural Resources, a civil society organisation consulted on the proposals.

“Politicians have authorised the construction of infrastructure in these agro-forests – but if we do that, it’s an open door for the pure and simple disappearance of our forests. They will be wiped out.”

There are fears that the process will result in a loss of property rights for indigenous communities and create a monopoly for foreign companies in what is the world’s largest cocoa producing nation. “There’s a risk of a massive land grab situation,” said Julia Christian, forest campaigner at Fern, a Brussels-based organisation working with cocoa growers. “They’re lands currently run by independent, small-scale farmers – but it’s going to become a monopoly with companies given exclusive rights to buy cacao.”

The purported aim of the government is to protect other forests by improving cocoa farming productivity in already deforested areas. Research has found that the least productive quarter of farms in the Ivory Coast had yields four times smaller than the most productive, usually due to diseases and pests.

By giving excessive power to industrial companies in concessions that will last up to 24 years, however, campaigners say that farmers will be disempowered. “This law is a good opportunity in principle,” said Gerome Tokpa, Africa lead for the Earthworm Foundation. “We could improve efficiency and give power to the local farmers. The problem is that the customary landowners who are trying to preserve the forest in alignment [with] the law will be punished. So much money is being earned, but nothing is coming down.”

In an industry worth $100bn (£80bn), workers earn on average less than one dollar a day, often labouring in stifling heat without shade and with heavy levels of pesticides. According to Fern, growers receive only 6% of a chocolate bar’s sale price compared with the 80% taken by manufacturers and retailers. The Ivory Coast has repeatedly struggled to establish a price floor for cocoa produce.

Traoré Ousmane, a 41-year-old cocoa farmer and workers’ cooperative member in western Ivory Coast, doubted that working conditions would improve. “We simply aren’t paid enough,” he said. “It’s very important to have a minimum price for producers because these companies do not care about us. They are looking to maximise profits.”

Critics have also lambasted the decision to forcibly evict all occupants of protected forests, who could number up to a million, as part of the law. Around 40% of the country’s cocoa crop is grown illegally in national parks and 230 supposedly protected government-owned forests, and Human Rights Watch has documented previous brutal government evictions of communities.

Fofana Souleymane, of human rights charity RAIDH, said the heavy-handed evictions had created a humanitarian crisis for indigenous communities deprived of healthcare, security and education. “It’s a very precarious situation,” he said. “Many people have lived in these parks for more than 10 years. Throwing them out is a huge problem – it destroys their means of living.”

Demand for chocolate is driving deforestation in the Ivory Coast, which produces more than a third of the world’s cocoa. Around 90% of the country’s forests have been destroyed since independence in 1960, forcing species like forest elephants and chimpanzees to near-extinction.

A Global Forest Watch report this year revealed the Ivory Coast had the second highest increase in deforestation rates in the world. If deforestation continues the Cavally Forest will disappear entirely by 2061 and the Goin Debe forest by 2071, according to a report by Mighty Earth.

Studies estimate that there are more than 2 million children working in west Africa’s cocoa fields, and trafficking and slavery is widespread. 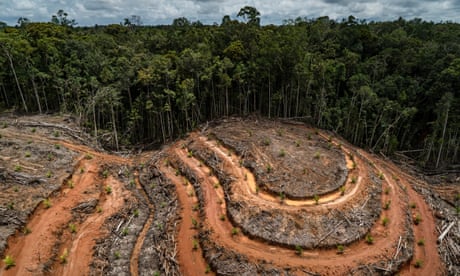 Stop biodiversity loss or we could face our own extinction, warns UN

Etelle Higonnet of Mighty Earth, a United States-based environmental group, believes the law could improve accountability. “It’s a wild west free-for-all at the moment, run by what are essentially mafiosos who are often working closely logging companies,” she said. “The chocolate companies have no responsibility for anything, they have a supply chain that they are not responsible for. There’s all this plausible deniability for these minuscule prices; it is a form of modern slavery.”

Olam Cocoa and Siat did not respond to a request for comment, but Richard Scobey, president of the World Cocoa Foundation, said the drivers of deforestation were “complex” and that the industry was working to develop “full traceability” of farms to tackle illegal cocoa farming.

He added: “The government’s new forest law does not promote the lease of large tracts of land to companies for large-scale commercial plantation development. Its strategy is to promote agroforestry concessions based on smallholder farming and community-based natural resource management.”

Last year Alain-Richard Donwahi, the Ivory Coast’s minister for water and forests, committed to restoring a fifth of the forest cover the country had lost by 2030.

The minister did not respond to repeated requests from the Guardian to comment for this article.