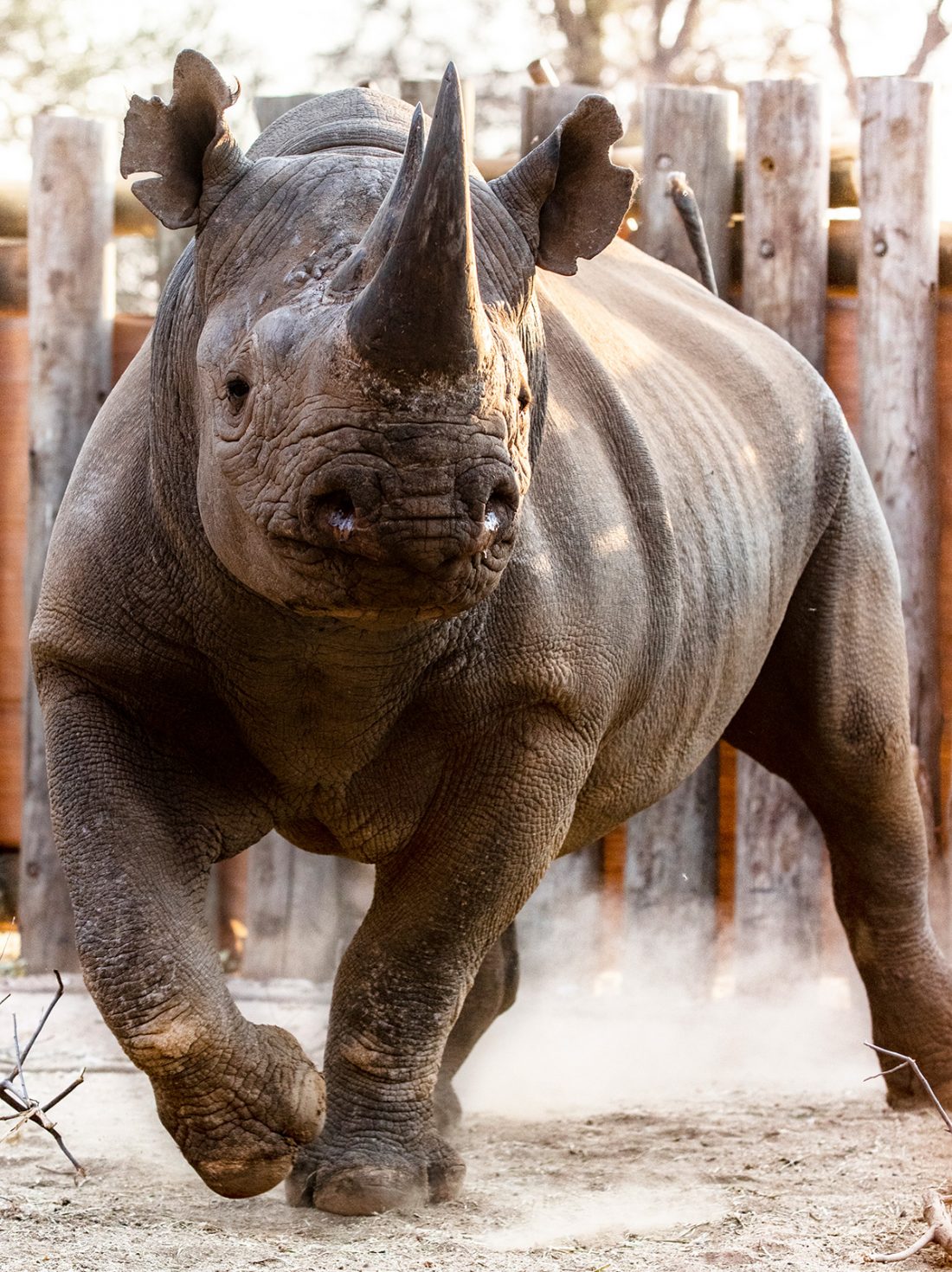 Saving the life of any species on planet Earth is one of the greatest achievements a human being can accomplish. It’s also a challenge that enterprising conservation organizations such as the Thaba Tholo Game Ranch in South Africa, which has the largest population of East African rhino (Diceros bicornis michaeli) outside of its historic home range, love to take on.

However, for Limpopo-based Thaba Tholo, keeping the East African black rhino population with the view of translocating some of them back to East Africa, where they were being poached to extinction, was a delicate and daunting task. Thaba Tholo’s four successful translocations of these rare rhinos back to Tanzania and Rwanda, where they faced extinction, were historic achievements.

The crowning moment of this little-known, unprecedented and inspirational East African black rhino conservation effort happened on 11 September 2019, when a total of nine black rhino were translocated from South Africa’s privately run Thaba Tholo to the Grumeti Conservation Area, which forms part of the Greater Serengeti Ecosystem in the north-western part of Tanzania. The four male and five female East African black rhinos originate from a breeding population in South Africa that is renowned for its exceptional breeding success.

The East African black rhino originated from the Kibodo area in Kenya in 1961. Following their introduction into South Africa, in Addo National Park, the population increased extremely slowly over the initial 18 years—by only four animals. Fortunately, once the population was introduced to and settled in at Thaba Tholo, the success rate of the population escalated.

“Within the following 20 years a total of 107 juveniles were born and the population quadrupled in size,” said Dr Petra Kretzschmar, scientist at the Leibniz Institute for Zoo and Wildlife Research, in Germany, who is responsible for the scientific management of the black rhino population.

The high security measures at the ranch where the black rhinos were kept, together with good pastures and scientific management of each animal, led to the project’s success. 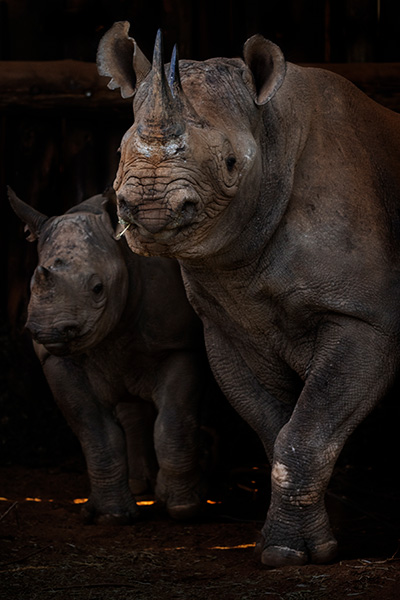 “Every animal has a studbook record, which contains the sex and age of the individual, its intercalving intervals, family tree and lineage records (in other words, who the mother and father were and traced back to great- and great-great-grandfathers), fertility tests, pregnancy sonars as well as its genetic profile,” says Dr Kretzschmar. “This enables us to calculate the population growth, the individual intercalving interval and sex and age of each offspring, and to carefully select unrelated individuals as well as a sex-and-age structure (population demographics) that would be the most beneficial founder population to the northwestern side of the Serengeti.”

The amount of known information for each individual black rhino selected for this relocation project is astonishing.

Forty years ago, an estimated 500 to 700 East African black rhinos freely roamed the Serengeti-Mara ecosystem. Poaching then drove this black rhino population to near extinction.

“I am proud that we are in a position to contribute to such a degree to the conservation of this iconic species,” said Rubin Els, CEO of Thaba Tholo. “It has taken a lot of vision, effort, planning and finances of various role players to have this nucleus population so well established in this time in history.”

Els notes that in South Africa the East African black rhino is ironically classified as an alien and invasive (unwanted) species, according to the South African environmental legislation, because their occurrence here is considered to be out of their natural home range.

“To me it was a no-brainer to establish a nucleus of East African black rhino in a place that was safe due to maximum security, intensive monitoring and where they could increase to their full capacity, away from the pressures of humans,” Els said. “Without all our logistics and scientific advice, we would have never been able to establish such a successful breeding population.

“After 20 years, all the planning and hard work have finally paid off, paving the way for us to start relocating meaningful numbers and new founder populations to areas and countries where they have become extinct.”

Elsewhere in East Africa, a group of 18 black rhino were relocated from Thaba Tholo to the Akagera National Park in Rwanda in 2017. With the new population in Akagera, Rwanda became only the fourth African country to have the rare East African black rhino roam its soil.

The Grumeti Conservation Fund has been instrumental and a key partner in two of the three translocation events to Tanzania. “We are incredibly grateful for the willingness and assistance from the Tanzanian government and the Tanzania Wildlife Management Authority (TAWA) in particular,” said Stephan Cunliffe, executive director of the Grumeti Fund.

Meanwhile, Wouter Maree, general manager of Thaba Tholo, said the East African black rhino translocation initiative owes its success to the women and men behind the scenes who continue to give valuable financial, technical and professional support to the project. They include ranger corps, the security teams of Thaba Tholo, the management team, shareholders and the Grumeti Fund, veterinarians Drs. Andre Uys and Dawid Snyman, Dr. Cindy Harper and her special lab team, Conservation Solutions, who provided transport and expertise, and Dr. Petra Kretzschmar for years of expert advice.

“Behind the scenes, there are a lot of unsung heroes,” says Maree. “These are the people who commit their lives and their very existence to the survival of rhinos, which is the cornerstone of success to the Thaba Tholo miracle.”

Little-known behind the scenes work 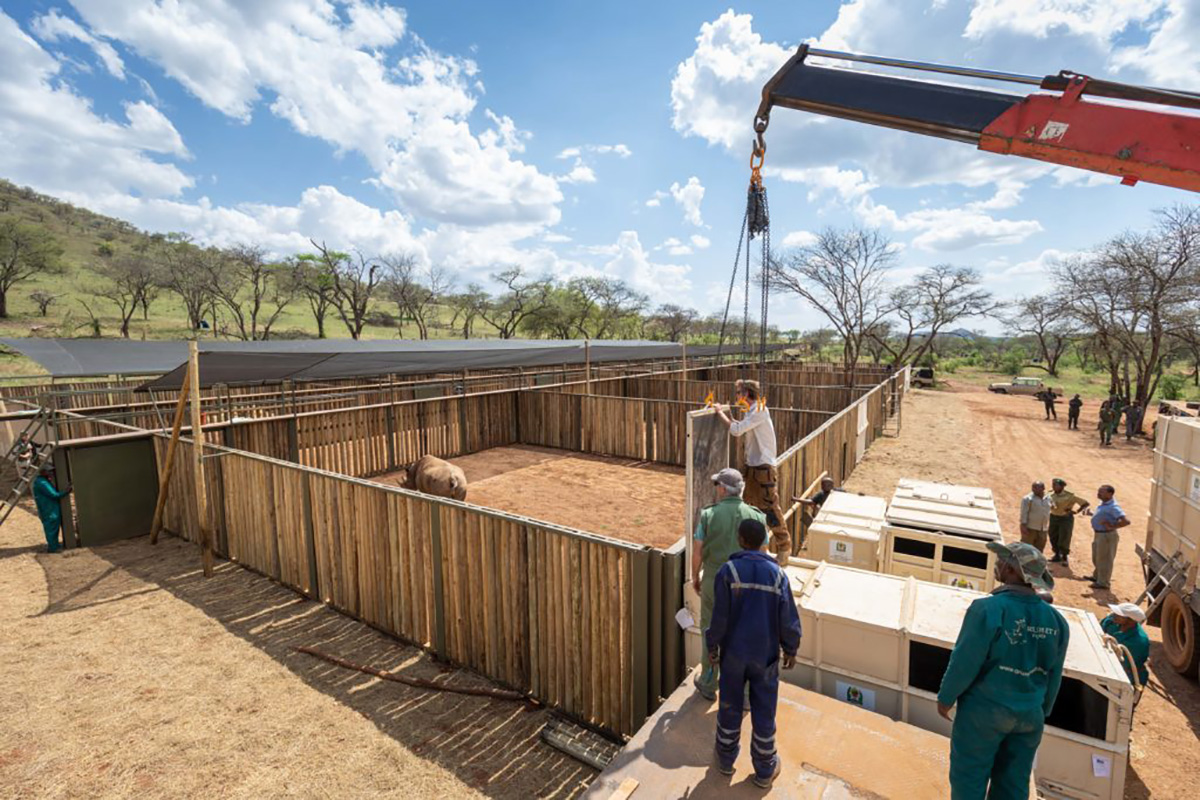 There are many logistical and administrative tasks involved in the ultimate success of such a mammoth venture. But few people are aware of the crucial role of the rhino keepers, who put their lives on hold to care for the animals while they are in captivity.

There is a dedicated team that ensures the welfare of these special animals until they are ultimately released at their final destination. It starts with this team being involved during the capture of each animal. The immobilized rhinos are moved to holding pens (bomas), where they are kept for about three months and keepers spend “every practical moment” with the rhino.

Having been naturally from the wild, the black rhinos need to be calmed as quickly as possible. The keepers talk to them, feed them and clean their holding pens on daily. Additionally, they chop branches for them twice daily (they are browsers and need the food known to them), clean their water troughs and even provide mud baths for them during the heat.

In order to clean the bomas daily, the rhinos need to be taught to move from their boma into an empty adjacent one. All the dung, uneaten branches and food are carted out on wheelbarrows by hand. The water troughs are emptied and meticulously cleaned. Then new branches and feed are placed. Thereafter, the rhinos are moved back into the clean boma, where they find fresh food and water prepared for them by their hardworking, caring keepers.

Before long the rhinos get used to the daily routine. Over time, the keepers develop an intense bond with each rhino. They get to know each animal personally. Not many people know that black rhinos have different temperaments and personalities. They even have different moods (some are grumpy throughout, but some become loveable and even like human contact, while others remain aloof or neutral), along with different preferences of food (some like a specific type of tree while others prefer game pellets or thorn-tree pods).

Black rhinos are extremely intelligent animals and get bored easily in confinement. To break their monotonous routine and keep them happy, their keepers make great efforts to maintain a daily movement routine and talk to them in loving and lively voices. The black rhinos can be spoiled brats, some of them liking toys, such as tires, to keep them occupied.

The point of these intense relationships with the rhinos is to allow them to adapt to their new captive environment as quickly as possible, since this ensures they remain in peak physical condition.

The transport and translocation/relocation leg of the project is extremely risky and stressful to the black rhinos. They need to be in tip-top condition (like an athlete before a marathon) in order to ensure that they travel safely and comfortably and settle successfully on the other side. Some of the keepers travel along with the rhinos on the cargo plane and assist with their acclimatization in their new country.

The keepers who were involved in this relocation success story deserve to be named: George Kgamanyane, Jankie Sekoboane, Robynne and Ros-Amy Els, Jennifer Conaghan, Kevin Aron and Aiden Perring. They are truly the unknown and unsung heroes.

Sad stories of rhinos having died while being translocated have recently grabbed media headlines. Therefore, the partners in the East Africa black rhino translocation initiative are humbled by their four consecutive successful translocations.

“I am both excited and relieved that the animals travelled well during their long journey and that all nine rhinos arrived safely, but at the same time I am sad for having to part with my special guests,” said Robyne Els, one of the rhino keepers.

Thaba Tholo is a 37,000-hectare (91,400-acre) game farm in the Limpopo Province of South Africa. The farm was created in 1990 by consolidating game and cattle farms before the Big Five and other rare species were reintroduced. Thaba Tholo is committed to the conservation of all species, especially endangered species. The game populations on the ranch are managed through live capture and limited hunting. Free-roaming predators, including lion, leopard, cheetah, brown hyena, caracal and other species also contribute to the natural selection process, which helps develop tough and vibrant animal populations, naturally adapted to withstand predation and disease.