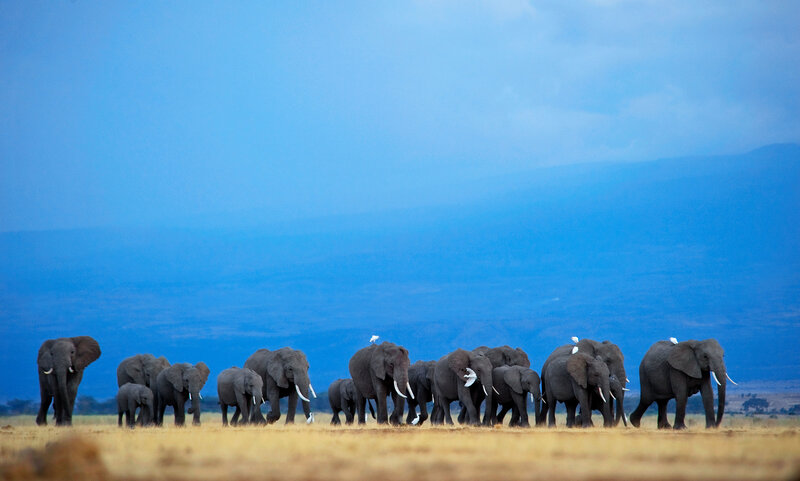 Botswana has the world’s largest elephant population, with some 130,000 animals.

Lebalang Ramatokwane surveys a jagged hole in the concrete wall surrounding his half-built guesthouse on the outskirts of Kasane, a small tourist town in the far north of Botswana. A few days earlier, an elephant had knocked down part of the wall in two places, and now he’s wondering whether he should beef up security before paying customers start to arrive.

“They are not only damaging what you see here,” Ramatokwane, a 37-year-old medical scientist, says. The thousands of elephants that roam freely around Kasane regularly destroy farmers’ crops and pose a real threat to people, he says. “These are wild, wild, wild animals. They are not conditioned.”

Botswana is home to some 130,000 elephants, more than any other country in the world. For years, trophy hunters from the U.S. and Europe came to Botswana to hunt large male elephants, paying tens of thousands of dollars to head out into the bush with a professional hunter and send a tusked trophy home to mount on their wall.

But in 2014, Botswana’s government, then led by former President Ian Khama, temporarily banned trophy hunting, citing declining wildlife numbers. The move was widely applauded by international animal welfare groups, but in places like Kasane, which lies on the edge of Chobe National Park, the move wasn’t universally popular.

People working in the hunting industry lost their jobs, and without the threat of hunting, wildlife officials say elephants have expanded their territory and increasingly wander around human settlements. “Before the hunting ban, the elephant’s range was most restricted to the game reserves and the forest reserves,” says Thebeyakgosi Horatius, who was until recently head of human-wildlife conflict in Chobe District for the Department of Wildlife and National Parks. “Now because they are feeling comfortable, they are not feeling disturbed by shootings. They come through the villages. They are free to go wherever they want to go.”

That has led to an uptick in incidents of human-elephant conflict. Between August 2018 and 2019, 17 people were killed by elephants across Botswana, according to the government. In Chobe District alone, five people were killed and seven elephants were shot by people trying to protect themselves.

In May, the government, now headed by Khama’s political rival President Mokgweetsi Masisi, announced it would lift the hunting moratorium and issue “fewer than 400” licenses for elephant hunts each year. Officials say it’s what the people want. They say it will control herd numbers, reduce human-elephant conflict and create jobs in areas where opportunities are scarce.

Critics called the move unethical, particularly as African savanna elephant numbers in general have been declining because of poaching. Many chalked it up to a populist ploy to win votes ahead of national elections in October.

There were also questions raised about benefits for Botswanans. Some of the critics said the return of hunting could drive away tourists, who liked the fact that hunters weren’t welcome in Botswana. And many people who work with wildlife in southern Africa — conservationists and professional hunters alike — say it won’t have any major impact on the overall elephant population numbers.

Ramatokwane, for his part, agrees with the government’s decision. With a half-built guesthouse, he’s banking on the fact that Kasane’s tourism market will continue to grow. Allowing hunting again is “just a control measure,” he says. “Tourists will still come.”

Trophy hunting is permitted across large swaths of Africa today. While some bans have been imposed and lifted, Kenya, once among the world’s most iconic hunting destinations, has had a national ban on trophy hunting since 1977. Many of the animals hunted and exported for trophies are smaller game, such as impala and warthogs, but most of the revenue generated from commercial hunting comes from the so-called charismatic Big Five: elephants, lions, leopards, rhinoceroses and buffalo.

It’s hard to say exactly how much money trophy hunters, who are almost all foreigners, contribute economically to these countries. A 2015 study commissioned by the Safari Club International Foundation, affiliated with the U.S-based pro-hunting group, estimated that between 2012 and 2014, hunters visiting eight countries — Botswana, Ethiopia, Mozambique, Namibia, South Africa, Tanzania, Zambia and Zimbabwe — contributed an average of $426 million to the group’s GDP each year and created more than 53,000 jobs. Critics say those claims are overstated; a study funded by Humane Society International, which opposes trophy hunting, puts hunters’ contributions at less than $132 million per year and job creation at a maximum of 15,500.

The economic impacts of hunting are fundamental to why its backers — and even some conservation groups — say hunters ultimately help species they target. Proponents say in a well-managed scenario, a government reinvests rich hunters’ money into species conservation and ensures that local communities share in the profit, leaving animals better protected from poachers and habitat loss. Even the World Wildlife Fund says that in some “rigorously controlled” cases, “scientific evidence has shown that trophy hunting can be an effective conservation tool as part of a broad mix of strategies,” including for threatened species.

In South Africa, where almost all hunting takes place on fenced, private reserves, the livelihood of the game farm owners depends on the health of the animals, says Peet Van der Merwe, a professor at North-West University in South Africa. “They use [animals) consumptively but sustainably, which is a model for Africa,” he says. “As we say, ‘If it pays, it stays.’ ”

In Kenya, by contrast, wildlife numbers plummeted nearly 70% between 2016 and 1977, the year hunting was banned, in part because people began raising hardy livestock such as goats and sheep in traditional wildlife areas, which meant less land for animals like hartebeest and impala.

Finding a way to ensure that wildlife populations and increasing human populations thrive together is essential to the animals’ future, says Enrico Di Minin, an associate professor at the University of Helsinki who has studied in South Africa. If countries want to ban trophy hunting, they need to have an alternative source of revenue worth hundreds of millions of dollars every year,” he says. “We live in a world where resources are limited. Just banning things without knowing the consequences is actually creating more problems for the species.”

Di Minin and other researchers acknowledge trophy hunting isn’t a perfect solution, most notably because local communities do not always reap the benefit they’re promised from the hunting industry. Namibia is widely considered to be an exception, where local communities in an otherwise remote and hard-to-market destination are largely benefiting from jobs and income generated by the hunting industry.

Other places aren’t so lucky. In countries like Zimbabwe, where corruption is rife, people in hunting areas often don’t see money that is supposed to come to them from the government, says Muchazondida Mkono, a research fellow at the University of Queensland. “When you are looking for evidence of how their lives have improved due to hunting, you don’t find anything,” she says. “This is the only narrative we have — that we need trophy hunting, that it’s a necessary evil. So people don’t even entertain the idea that there may be another way.”

Mkono and anti-hunting groups like Humane Society International think other forms of tourism, like safaris that cater to people who want to watch and photograph animals, are actually more beneficial to local communities than trophy hunting. Not only do some tourists not want to spend money in countries that allow their wildlife to be shot, but other kinds of safari packages, particularly when it comes to high-end travel, employ more people than the low-key, back-to-basics experience that hunters often seek.

“There is definitely more employment created through photographic safaris,” says Wouter Schalken, a tourism development expert who has worked for the World Bank in Botswana. “There are more guests involved. The season is longer.” 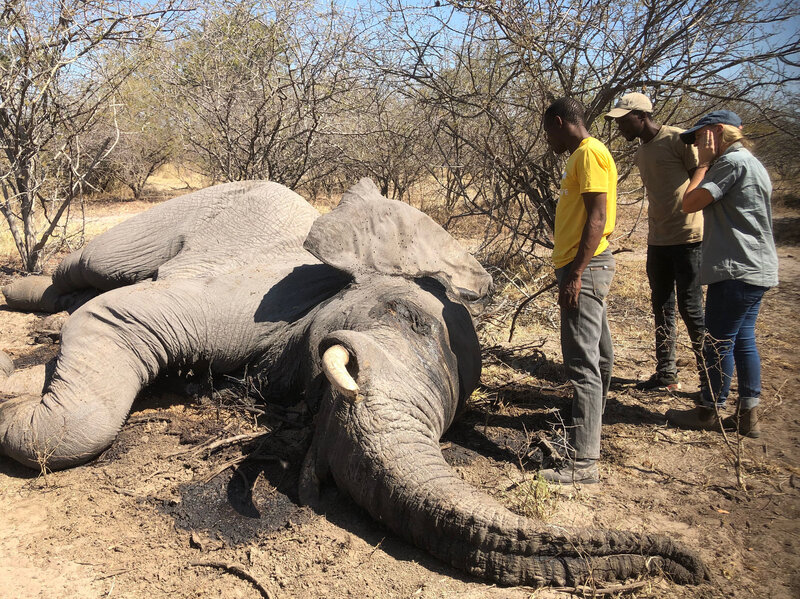 Did this male elephant die from natural causes or was it shot? That’s the question as the carcass is examined by Tirelo Malcom Ramatsipele, a wildlife official in Botswana’s Chobe District (left), along with Isaiah Mwezi (middle) and Tempe Adams (right), who work for Elephants Without Borders, an organization that works to prevent human-elephant conflict in the area.

After Botswana stopped hunting in 2014, the government wanted to focus on photographic tourism, and it did, with mixed results. In some areas, the new business model thrived, but in others, the plan failed to take off because the areas where hunting had been happening weren’t especially photogenic.

Still, the number of tourists arriving has gone up since 2014, though it’s impossible, based on the data available, to say exactly why. In 2012, two years before the ban officially went into place, Botswana recorded some 367,000 tourists arriving on holiday, including 19,376 Americans. In 2017, three years after the ban was enacted, about 502,000 tourists visited the country, including 45,977 Americans.

After five years without the hunting industry, Kasane certainly doesn’t appear to be a town that’s on its knees. Construction sites are scattered alongside the road leading in and out of town. Investors are building new hotels and apartment complexes. And little guesthouses like Ramatokwane’s are cropping up in new neighborhoods — with roads still waiting to be paved — to cater to tourists coming to see the wildlife in Chobe National Park. At sunset, groups of boats motor along the Chobe River on the edge of town, bringing tourists back from their evening safaris to their hotels.

Some people are worried that this momentum is going to disappear now that hunting is back on the table. Longtime wildlife guide Grant Nel says that after the government’s decision in May, his inbox flooded with questions from past clients about why the country made the move. “It is already affecting our numbers. Certainly the clientele that I deal with finds hunting abhorrent, and I can fully understand where they are coming from and why they wouldn’t want to support it,” says Nel.

Nel says bringing hunting back is a short-term strategy that doesn’t have a future in Botswana. “Hunting as an industry globally is shrinking. I don’t see it lasting beyond five to 10 years.”

Others argue that it doesn’t have to be an either/or situation. Kevin Chadwick, who has been a professional hunter in the region since 1978 and owns a popular lodge in Kasane, says photo safaris and hunting coexisted for years in Botswana without problems. At a major hunting convention in Reno in January, he said potential clients were eager to learn the government was planning to reopen hunting in Botswana. “Once they heard the hunting was going to open, there was a lot of interest,” he says. “It was one of the big trophy animal countries around.”

Some farmers in the area say that when hunting was allowed, they rarely saw elephants wandering around. Now keeping them out of their fields has become a daily struggle. About an hour’s drive outside Kasane, in an area where hunting used to take place, farmers say elephants raid their crops when they go at night to drink from the nearby Chobe River. There’s a drought underway, and hunting firms used to keep watering holes supplied for elephants to use. Without those, the elephants have to commute farther to drink and often stop to snack in fields along the way.

Jackson Maruza, a 65-year-old farmer, used to be a guide in the hunting industry. After having a few years’ worth of crops destroyed by thirsty elephants, he says he welcomes the government’s decision to bring hunting back.

It’s not that he and other farmers don’t like the elephants, he says. It’s just that there are too many of them, and hunting is a good job opportunity. It’s not yet clear exactly when hunting businesses will be up and running again, but if that happens, Maruza says, “We are ready to come and work.”

Krista Mahr is a journalist based in Johannesburg, where she has been writing for The Los Angeles Times, Associated Press, The Washington Post, The Guardian and others. She previously lived in New Delhi, where she covered South Asia for Reuters and Time. Contact her on Twitter @kristamahr.