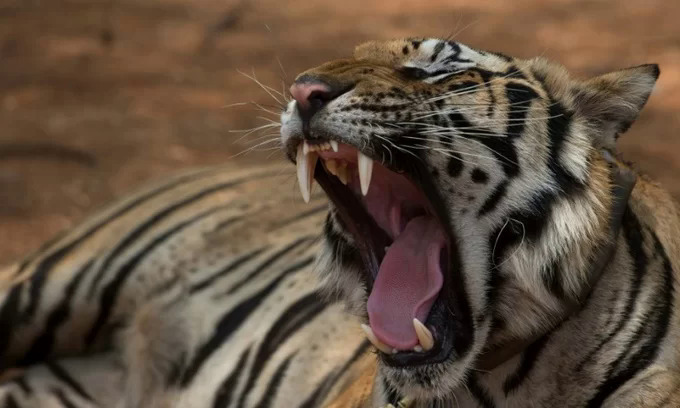 An EU initiative seeks to combat the trafficking of tigers and other wild animals in Vietnam and its Mekong neighbors. Photo by AFP/Nicolas Asfouri.

The EU on Monday launched a €10 million ($11.14 million) project for strengthening government actions to combat wildlife trade in the Greater Mekong, Malaysia and China.

The ‘Partners against Wildlife Crime’ initiative seeks to “disrupt the illicit supply chains of wildlife from source to market in the Greater Mekong Region, Malaysia and China by leveraging civil society partnerships to increase the effectiveness of Government action,” said an EU press release released at a seminar in Hanoi on Monday, the International Tiger Day.

The joint effort the World Conservation Society (WCS) and Pan Nature started in January 2019 and will last until December 2022, the organizers said at the seminar, which was also to review Vietnam’s tiger conservation efforts.

The EU is putting €8 million into the project, while the rest will come from the other partners.

WCS and Pan Nature will coordinate with Vietnam’s Ministry of Public Security’s Environmental Crime Prevention Agency, Ministry of Natural Resources and Environment’s Biodiversity Conservation Agency and other agencies to implement this project.

Nguyen Thi Van Anh from the Biodiversity Conservation Agency said that the current picture of wildlife conservation in Vietnam was quite bleak due to policy challenges, inadequacies, overlaps in species lists, and a lacking of regulations on handling evidence of illegal trafficking.

She added that resources for implementing campaigns and programs for wildlife conservation are limited and wildlife habitats were being devastated by infrastructure construction.

Therefore, wildlife conservation is not simply about recovering the number of a certain species but also about the restoration of the ecosystem and the reproductive rate in a herd in nature, she said.

The WWF warned in 2016 that the number of wild tigers in Vietnam may be less than five individuals, down from 30 in 2011, and was a critically endangered species. After the death of the nation’s last rhino in 2010, the tiger could be Vietnam’s next large mammal to be listed as extinct in the wild, it has been predicted.

The EU release said the alarming figures show the challenges Vietnam faces in fulfilling its global commitment, made at the St Petersburg International Tiger Conservation Conference in 2010, to double the number of wild tigers by 2022. Vietnam is one of 13 countries in the world with tiger habitats.

Meanwhile, the country continues to be a hotspot for illegal wildlife trafficking, with products like elephant ivory, tiger bones, pangolin scales and bear bile prized locally for decorative purposes and medicinal properties.

According to World Wide Fund for Nature (WWF), there are roughly 1,000 illegal traps placed in forests during rainy season between the Vietnam-Cambodia border.

In the 2013-2018 period, Vietnam spent more than VND256 billion (over $11 million) on elephant conservation in Nghe An Province in central Vietnam, Dak Lak in the Central Highlands and Dong Nai Province in the south. But its impact was very limited, with the number of wild elephants declining.