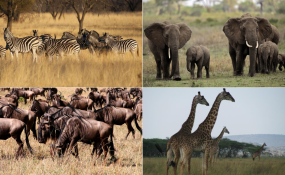 Government’s push to privatise loss making parastatals has moved a notch up after putting the Zimbabwe Parks and Wildlife Management Authority (Zimparks) up for sale.

As part of its efforts to turnaround the economy, President Emmerson Mnangagwa’s administration had indicated it was to dispose of its shareholding in most State entities most of which have been bleeding the country dry.

“We are also looking for investors for Zimparks, we decided to sell off the equity or at least enter into some kind of joint venture arrangement. It has fabulous locations but the facilities are run down and we hope this move will increase efficiency,” Ncube said

The authority manages one of the largest estates in the country, about 5 million hectares of land which makes up around 13% of Zimbabwe’s total land area. Most of the parks under its management are located in ecological regions four and five offering little in terms of agriculture.

Zimparks is charged with managing the country’s diverse wildlife on both private and communal lands. Private landowners can utilise the wildlife on their land but are still accountable to the authority for the welfare of the animals.

Government according to Ncube is also looking for suitors to join it in resuscitating Willowvale Motor Industries and the corruption riddled Allied Timbers.

Other State owned entities that government is reducing its ownership include the People’s Own Savings Bank (POSB) and the Infrastructure Development Bank of Zimbabwe (IDBZ) for which Ncube said deals are close.

“In Silo Foods Industries government is willing to reduce its stake to around 26%,” he said.