On June 12, Moazu Kromah, a Liberian citizen codenamed “Kampala Man,” was arrested in Uganda. The very next day, Kromah found himself standing in a federal courthouse in New York City as a judge read the charges against him–among them, conspiracy to sell rhino horns and elephant ivory valued at $7.4 million.

While a handful of high-level animal parts traffickers have been arrested before, experts believe this case represents a paradigm shift in how governments can combat illegal wildlife trade: by aggressively infiltrating and dismantling criminal syndicates, and by building strong cases to ensure the syndicate’s members are brought to justice.

“We’re not reacting to a seizure or a tip on an incident, we’re identifying criminal networks and proactively going after them,” says David Hubbard, the US Fish and Wildlife Service (FWS) special agent in charge of the international operations unit. “I think this is truly a game changer for the wildlife trafficking world.”

Kromah, along with his partner, Amara Cherif, a Guinea citizen also named on the indictment, allegedly headed one of the largest wildlife crime syndicates in Africa. Cherif was arrested in Senegal a few days before Kromah and his extradition to the US is now pending. Mansur Mohamed Surur and Abdi Hussein Ahmed, two Kenyans currently at large, appear on the indictment as well.

Kromah, Cherif, and Surur face additional charges of money laundering, while Surur and Ahmed are also charged with possession with intent to distribute over 20 pounds of heroin. According to Chris Thouless, director of the Elephant Crisis Fund at Save the Elephants, a non-profit conservation group in Kenya, these additional charges exemplify the fact that illegal wildlife trade frequently goes hand in hand with other forms of crime—and that inclusion of those crimes can significantly strengthen sentences. In this case, the wildlife charges carry a maximum sentence of five years in prison, but the drug possession one carries a mandatory minimum of 10 years and a maximum of life.

For Africa’s rhinos and elephants, the alleged criminals’ business was “as destructive as it was lucrative,” saidUS Attorney Geoffrey Berman. According to the indictment, since 2012, the defendants conspired to traffic and sell at least 200 pounds of rhino horn and 10 tons of elephant ivory, representing some 35 poached rhinos and more than 1,000 elephants. Based out of Uganda, their transnational criminal activities spanned at least seven countries in East and West Africa, with customers as far-flung as the United States and Southeast Asia. 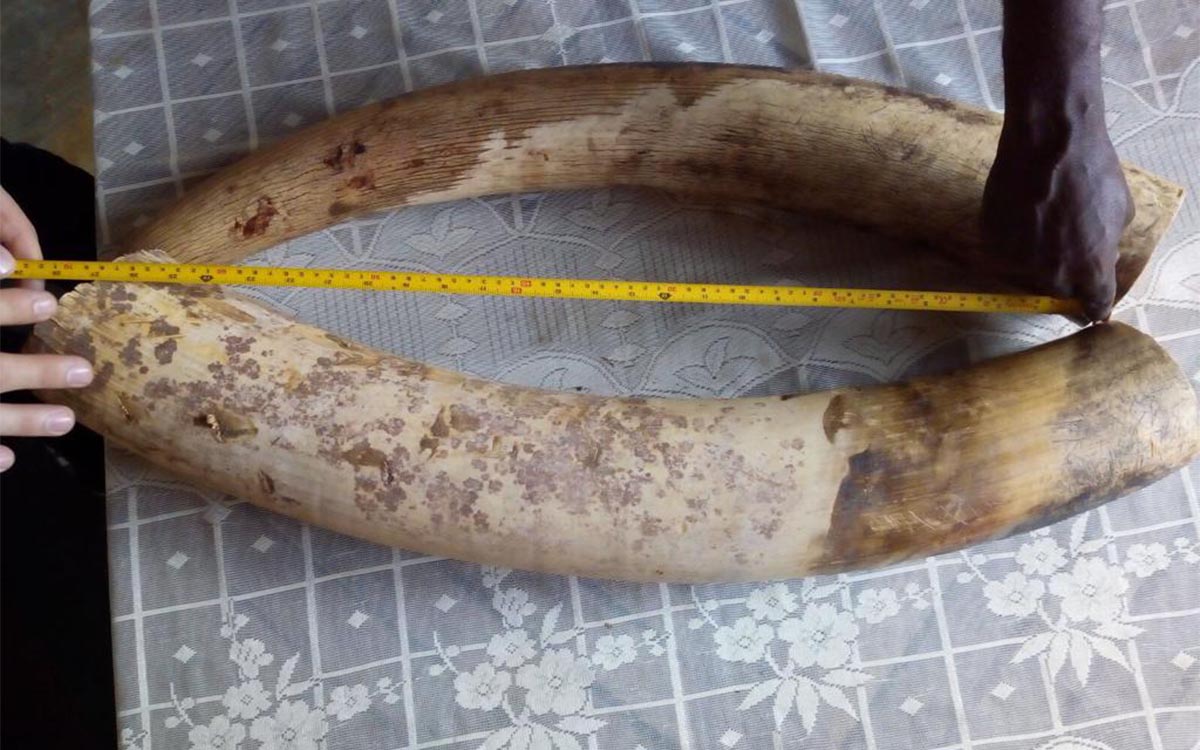 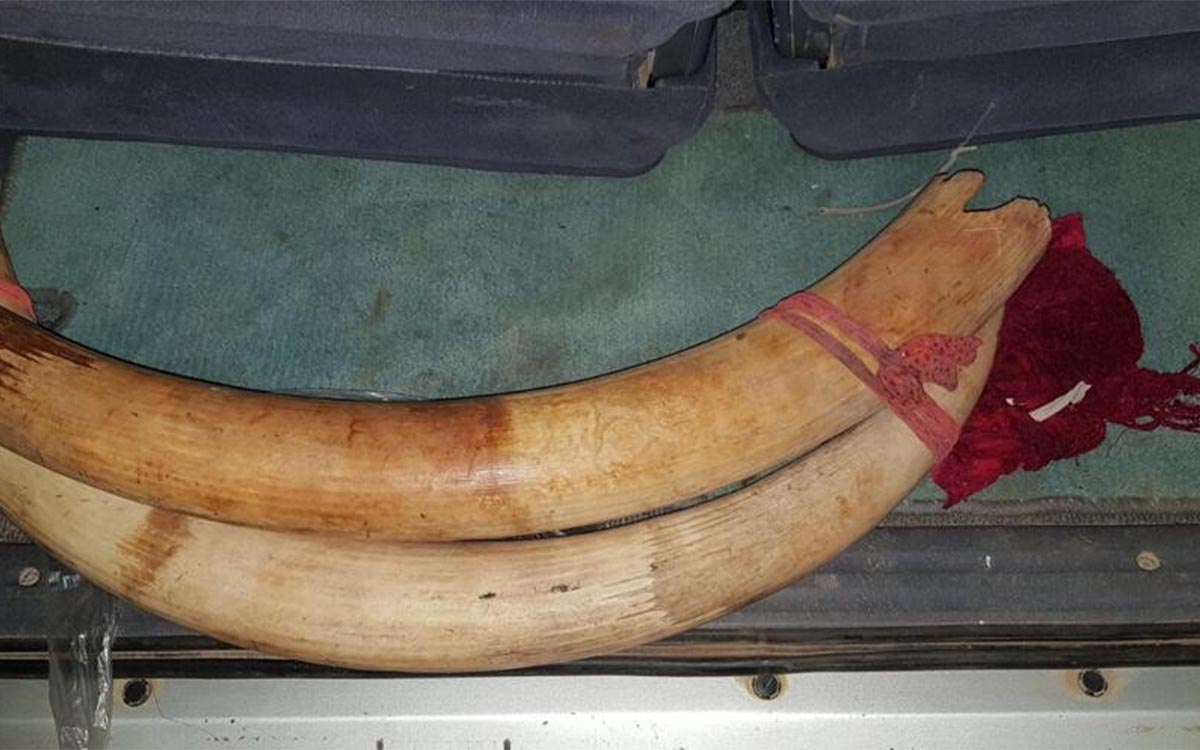 INTELLIGENCE PHOTOS OBTAINED IN EAST AFRICA, FROM NETWORKS LEADING UP TO THE INVESTIGATION.

To build the case, in 2018 a confidential source infiltrated the alleged criminals’ network by posing as a buyer representing customers in Manhattan’s Chinatown. After negotiating by text, phone, and in person meetings, the source paid for multiple rhino horns using a US bank account. Law enforcement agents intercepted two New York-bound packages containing the horns, which the shippers had concealed inside African masks and art works.

The FWS-led investigation was made possible through the collaboration of various agencies, including the Drug Enforcement Administration, as well as African governments and law enforcement units. A number of non-profit conservation organizations—which have asked not to be named while the trial is ongoing—also provided intelligence and support.

“This case was an example of our ability to partner with a select, trusted group of NGOs that understand US law enforcement, the way we work, and what we need to bring someone to justice,” Hubbard says. “That’s critical.”

This level of cooperation stands in contrast to past wildlife trafficking cases, which were typically pursued by single, isolated groups. “The way things were being done in the past for conservation was not working,” says a source close to the investigation. “We need to fund projects that build collaboration and cooperation and are geared toward prosecutions.”

Kromah and his colleagues will be prosecuted by the Southern District of New York—one of the most powerful US Attorney’s Offices in the country, according to Hubbard. If found guilty, the defendants face the possibility of decades or even life in prison. To get a lesser sentence, they may be given an opportunity to take a plea bargain in exchange for information that will help unravel the entire criminal enterprise—another perk of trying them in the US, Thouless says. “If they were in an African court, they wouldn’t get a very long sentence, so it’s much less likely they’d divulge a lot of information about their network.”

That the defendants will be prosecuted on US soil is also significant because it eliminates their ability to use corruption or intimidation to evade justice. Kromah, for example, faced chargesin 2017 in Uganda related to a seizure of 1.3 tons of ivory, but he is still awaiting prosecution. “He had corrupted the system and delayed things,” the confidential source says.

“It’s a common problem with trying to indict high level criminals in Africa,” Thouless adds. “In Kenya, for example, low level wildlife crimes get prosecuted and get convictions, but for high level crimes, every case has failed.”

Hubbard cannot comment directly on the Kromah case and the likelihood of reaching a conviction, but he does say that the US government has undergone a “mindset shift,” now regarding the illegal wildlife trade as a significant threat and becoming serious about tackling it. The FWS currently has seven attachés stationed at key wildlife trafficking hubs around the world, for example, but by the end of this year, that count will increase to 12.

The Kromah case, says Hubbard, “is signaling the beginning, not the end.”

By signing up, you are opting in to receive periodic comm