“In many ways, southern Africa has become a victim of their conservation success, as far elephants go,” says Dr Russell Taylor, the Transboundary Conservation Planning Advisor for the World Wildlife Fund.

Southern Africa continues to hold by far the largest number of elephants on the African continent. Of the 475,000 elephants in Africa, 293,447 are located in the region.

And nearly 75 percent (around 220,000) of southern Africa’s elephants are to be found in the Kavango Zambezi Transfrontier Conservation Area (KAZA TFCA). This vast 520,000 km² expanse stretches across Angola, Botswana, Namibia, Zambia and Zimbabwe. Established in 2006, its goal is to manage the Kavango Zambezi ecosystem.

But conflict between elephants and humans is on the rise. With a growing elephant population and burgeoning human numbers, the scarcity of natural resources makes it difficult to accommodate both wildlife and people.

The elephants move out of their usual range looking for food and water. In so doing, they can damage crops, property and sometimes cost lives.

“A year’s livelihood can be destroyed in one or two nights by crop-raiding elephants, for example,” says Dr Taylor.

Water resources are becoming increasingly scarce because of climate change, leading to humans and elephants competing for the same resources. As a result, water tanks and reservoirs for livestock have been destroyed by elephants.

“If we don’t provide legal alternatives to human-elephant conflict, people themselves will take matters into their own hands and they could fuel the elephant-poaching crisis which is really on the increase in southern Africa,” declares Taylor.

We need to return right of access to natural resources to the local population. We’ve got to move beyond the days of being paternalistic, entitling them to benefit from these resources.

The population living in the immediate vicinity of the elephants is poor and the temptation to engage in poaching is great: a single elephant tusk can fetch up to ten times the average monthly salary.

Taylor fears that if measures to ensure harmonious co-existence between elephants and local communities are not put in place, some people might join the crime syndicates behind the poaching crisis.

“Efforts by southern African elephant range states to sustainably manage their populations are subjected to constant media scrutiny which often does not take into consideration the aspirations of the KAZA range states.”

This is an extract from the final communique issued at the end of the Kasane Elephant Summit on 7 May in Botswana. It was attended by the presidents of Botswana, Namibia, Zambia and Zimbabwe.

The southern Africans are pointing to the divide between Western perceptions of how wildlife conservation should be carried out and the reality for the people on the ground, living next to the elephant population.

“People are very resentful of what has been happening lately and things are reaching a crisis,” adds Taylor. And this is particularly true in the two KAZA countries with the largest elephant populations.

Botswana holds the largest number of elephants within the KAZA states with over 130,000 individuals. It is followed by Zimbabwe where the elephant population is over 82,000.

Recent biodiversity global assessment reports have concluded that conservation is doing least badly in areas where the indigenous population is left to look after indigenous wildlife. According to a World Bank report, indigenous peoples – who makes up less than 5 percent of the global population – protect 80 percent of planetary biodiversity.

Given the level of resentment within some local communities in KAZA countries, it might prove a challenge to engage them to work with the elephants and not against them.

Dr Taylor believes it is possible to reverse the trend with new approaches where local communities are empowered to use, benefit, trade or dispose of the resources of the land.

“We need to return right of access to natural resources to the local population through community-based natural resource management,” he says. “We’ve got to move beyond the days of being paternalistic and we’ve got to give them real evolution where they themselves become their own responsible authorities, entitling them to benefit from these resources.”

In this community conservation model described by Taylor, the local communities are accountable to their constituencies rather than to the central government.

“It is not in the developed world that we’ve got our best biodiversity track record,” adds Taylor. “In a big landscape like KAZA with a low population density and abundant wildlife population, this is the place to allow transformation to take place and really let people become masters of their own destiny.”

At the end of the Kasane Elephant Summit, Botswana’s President Mokgweetsi Masisi, as the host, gifted stools made of elephant feet to his counterparts from Namibia, Zambia and Zimbabwe.

“We cannot continue to be spectators while others debate and take decisions about our elephants,” said President Masisi.

The Southern African countries have put a request for the Convention on International Trade in Endangered Species (CITES) to lift a 1989 ban on international trade in ivory and allow the sales of ivory stockpiles to fund elephant conservation.

“That one-size-fits-all approach from CITES of banning everything disregards the good efforts of our governments and is neither sustainable nor advisable. We must reject it,” said Emmerson Mnangagwa, the president of Zimbabwe, at the Kasane Elephant Summit in Botswana. 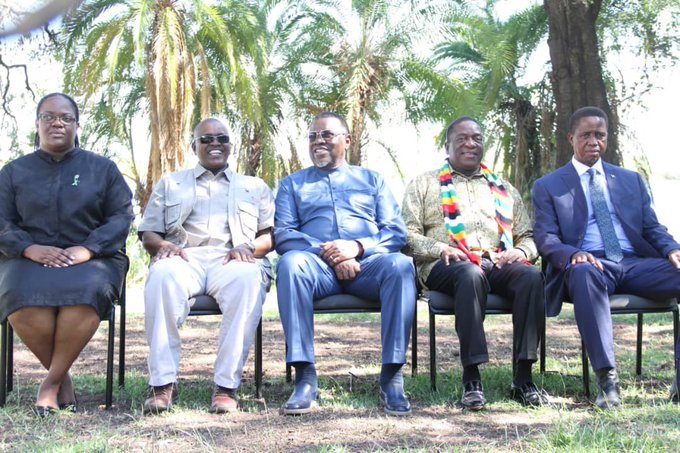 At the Kasane Elephant Summit, we worked to develop a common regional position on elephant management, and called to be able to trade and better benefit from our natural endowments so they may help us to eradicate poverty and improve the quality of life for rural communities 1/2

These countries need funds and are in possession of a commodity they are not allowed to trade.

Zimbabwean-born Taylor who has been a conservationist for 40 years is not averse to the idea of trading ivory, “provided it is done in a regulated way and done with good governance, this is really important”.

Elephant hunting is another source of revenue. It is allowed by countries such as Namibia, Zimbabwe, Zambia, Angola and South Africa. Botswana’s President Masisi wants to lift the hunting ban on elephants imposed in 2014 by his predecessor, former President Ian Khama.

A white paper with recommendations to that effect was issued in March, by a government sub-committee, but it has not yet been debated in Parliament.

Taylor says that hunting could be carried out “within biologically sustainable limits”.

“Botswana want to lift the current moratorium on hunting as a conservation tool. It should be properly managed, properly regulated, using sustainable quotas. In most cases, you are harvesting less than 1 percent of the population. It’s what I might call wise conservation,” adds Taylor.

The conservationist stresses the need to harmonise policies and practices across the KAZA landscape while acknowledging the sovereignty of each of its five states.

“There is a great opportunity to allow greater movement of elephants across borders if we can remove some of the barriers such as veterinary fences which are a huge impediment to wildlife movement right now,” he says.

He believes in managing KAZA’s elephants as one contiguous population.

“We would like to see elephants moving from an abundant situation like Botswana to Angola or Zambia where the population has been severely depleted by poaching. They could then re-populate the more depopulated areas,” Taylor declares.

Taylor is confident that a harmonisation policy could work quite effectively.