A reasonably balanced piece – with at least the concerns of conservationists and the sensible words of Cathy Dean of Save the Rhino included. Why the BBC is using an ego on legs like Pietersen as a serious interviewee beats me. Just clickbait. KS

The UK will not be banning imports from trophy hunting yet, Michael Gove has told BBC Radio 5 Live.

The Environment Secretary said it was a “delicate political balancing act”.

He said he had been advised by wildlife charities to “be cautious” in following other countries in outlawing imports from the controversial sport.

Trophy hunting is the shooting of carefully selected animals, including some endangered species, under strict government controls.

Mr Gove was interviewed by former England cricketer Kevin Pietersen as part of a new BBC Radio 5 Live podcast, Beast of Man, which looks into how the South African rhino can be saved from extinction.

Clients, mainly from Europe or the US, often pay thousands of pounds to take part in a hunt, and keep a “trophy” – usually the head or skin, or another body part.

It’s a big business in some African countries.

Critics describe it as a blood sport, but proponents say it helps raise vital money for conservation, especially for endangered species. 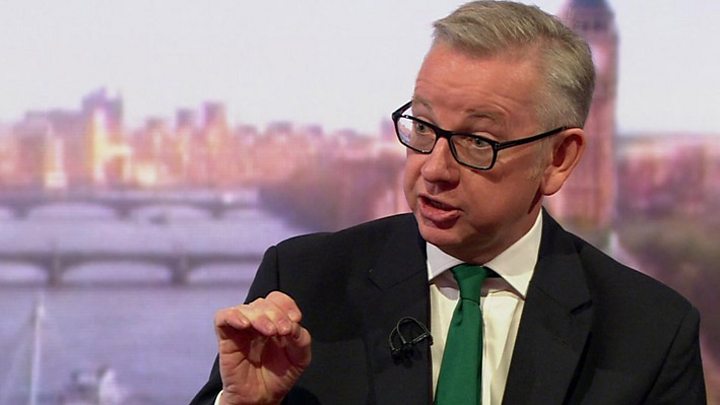 Currently, if a trophy hunter wants to bring a body part from their hunt back into the UK, they can do so, with a special permit.

“I want to try and preserve those wild places in Africa. But the only way they get preserved is if there’s money. If it doesn’t pay it doesn’t stay. It’s as simple as that.”

But trophy hunting is controversial.

In 2015, the death of Cecil the lion in Zimbabwe’s Hwange National Park sparked worldwide revulsion and resulted in a number of countries – including Australia, France and the Netherlands – implementing bans on the import of lion trophies.

At the time, the UK government pledged to do the same unless there were improvements to how hunting took place.

When asked about why the UK had not yet enforced a ban, Mr Gove said he had been advised by conservationists and charities to proceed with caution.

He said they told him: “Don’t come in, you know, with your clod-hopping boots from the UK and necessarily tell people in each of these countries exactly how they should regulate their own wildlife.”

“On an emotional level and on a personal level, I find it difficult to understand,” Mr Gove said. “But I also recognise that I’ve got to respect if there is expertise, which says that [trophy hunting] done in a managed way can help wildlife overall, then let’s just test that.”

The CEO of charity Save the Rhino, Cathy Dean, says that “well-regulated trophy hunting has a role in overall rhino conservation strategies”.

The increase is “partly due to the conservation efforts and involvement of the private sector, who have dedicated land to breeding rhinos, some of which may be trophy hunted, rather than to livestock or agriculture”.

In 2018, more than 50 celebrities – including singers Ed Sheeran and Liam Gallagher – signed an open letter in support of the Campaign to Ban Trophy Hunting, urging the Government to ban trophy hunters from importing animal body parts into Britain.

A cross-party Early Day Motion, signed by more than 159 MPs, has also called on the UK government to stop trophy hunting imports of endangered species.

“I think that there is growing momentum for the law to change. But what I don’t want to do is to get ahead,” said Mr Gove.

“I don’t want to be in a position where am I running so far in advance of what other charities and other leaders want, that we risk the good relationship that’s been built up over time.

“If particular communities have got used to driving income from hunting, you don’t want to seem as though you’re basically saying, we’re taking your livelihood away.

“We’ve got to make sure that there is a clear alternative, that they know that their livelihoods and their lifestyle are going to be respected and not patronised, before they will feel comfortable about moving.”

Kevin Pietersen: Beast of Man can be downloaded from BBC Sounds.