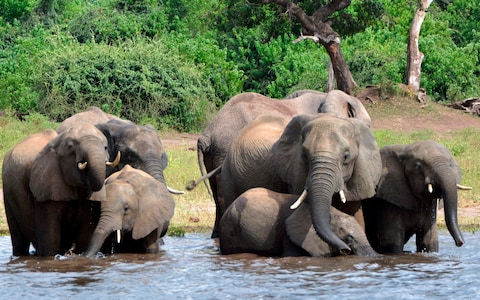 African nations home to more than half the world’s population of elephants on Monday called for an end to the ban on sales of ivory.

Delegates from six countries attended a summit in Botswana this week where they discussed how to persuade the world to lift the 30-year-old ban imposed by the Convention on International Trade in Endangered Species, CITES.

The attendees, which included heads of state from Botswana, Zambia, Zimbabwe and Namibia, stressed they want to be able to sell huge stockpiles of ivory to boost funds for conservation and anti-poaching.

Mokweetsi Masisi, the president of Botswana, said on his arrival at Kusane that the summit’s theme was: “Towards a common vision for the management of our elephants.”

He added: “This is meant to generate a better understanding of elephant management and its associated challenges… other heads of state and ministers from the Kavango-Zambezi Trans-Frontier Conservation Area, as well as experts from southern Africa will address the escalating human wildlife conflict that exits in the region,” he said.

Fulton Mangwanya, director of Zimbabwe’s Parks and Wildlife Management Authority said as he left Harare for the summit: “We are fighting tooth and nail with our enemies so that we are allowed to trade in our wildlife resources. The main contention is the elephants which we (Zimbabwe) are not allowed to benefit from. These are the issues that we want to defend as a region.”

The summit at a tourist lodge in northeast Botswana featured presentations on managing elephant populations in the face of urban sprawl and rampant poaching.

Mr Masisi also raised ending the nation’s four-year-old  hunting ban. Efforts to manage elephant populations in southern Africa were “subjected to constant media glare, with much of this coverage ignoring the plight of rural communities who bear the brunt of living with elephants,” he said.

Botswana has a population of 130,000 elephants, more than a quarter of the total on the continent. Namibia, South Africa, Zimbabwe and Zambia allow hunting on the grounds that it funds conservation efforts.

“Botswana is determined to reintroduce sustainable-use conservation but is committed to engaging with all parties concerned before implementation,” said Botswana’s environment minister Kitso Mokaila.

Tourism is the country’s second highest earner of foreign currency after diamonds. Zimbabwe’s spokesman for its Parks and Wildlife Management Authority, Tinashe Farawo, told delegates: “We must be allowed to sell and benefit from these animals.”