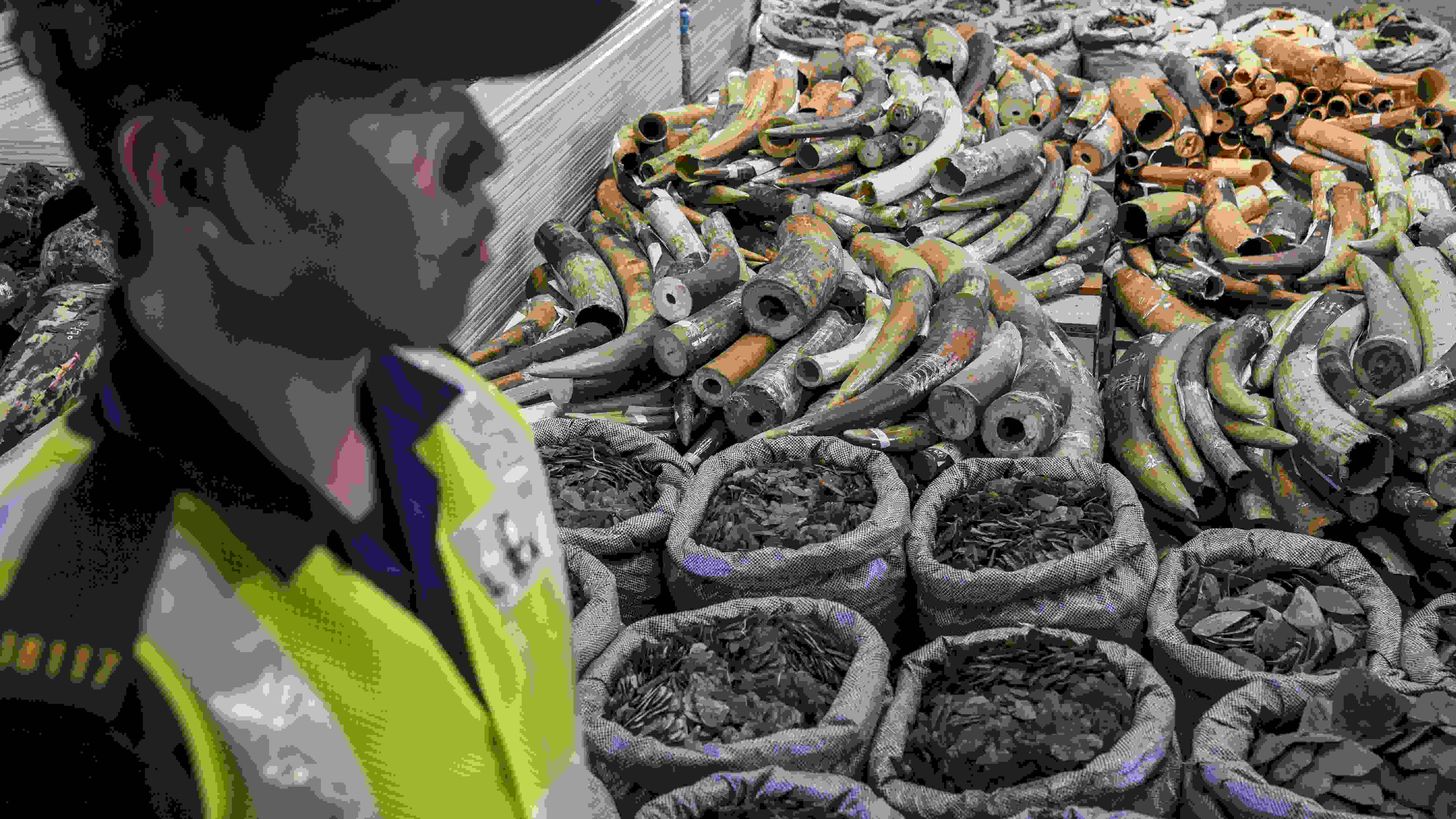 In 2014, an ivory consignment worth one million U.S. dollars mysteriously disappeared from a Ugandan government storage facility. A year later, 12 rhino horns went missing from a vault in Mozambique.

These are not isolated incidents in Africa, certainly not for Mozambique where 266 pieces of ivory, weighing more than 1,000 kilos, also vanished from a repository located at a crowded location in 2012. The massive haul was never recovered.

Over the years, similar thefts have been reported in Zambia, Ethiopia and Zimbabwe, among other countries, with experts suggesting that lax storage security on the continent was to blame.

The most recent was on April 13 in South Africa where police confiscated 167 rhino horns on the way to Southeast Asia. A week later, it was confirmed that the consignment was part of a registered stockpile of seized wildlife products.

Stolen from Africa and smuggled into SE Asia

In the last four months, there have been nine significant seizures in SE Asian countries involving pangolin scales, rhino horns and ivory, indicating that the wildlife trade may be expanding on an industrial scale.

Experts believe frequent theft from official stockpiles in African countries is behind the record hauls.

“It’s one possible line of inquiry that should be pursued,” Richard Thomas, spokesperson of Traffic, a global wildlife monitoring agency, told CGTN. “After all, it wouldn’t be the first time stockpiles of wildlife commodities have got legs and walked.”

A pangolin scale consignment of 12.9 tons intercepted in Singapore on April 3 was the largest single-haul seizure in the world. Earlier, on February 1, authorities in Hong Kong seized 8.2 tons of pangolin scales – a record for the Chinese territory.

On the Chinese mainland, 2,748 elephant tusks weighing 7.48 tons of ivory, were intercepted by China Customs in March, and in Vietnam,  9.12 tons were seized in April – all single haul shipments.

The seizure in China was the second biggest since detailed record-keeping for ivory began in 1989 – eclipsed only by 9.12 tons seized in Vietnam just five days earlier.

“It does appear as though shipping such large quantities in one go means the criminal gangs must have been reasonably confident a single shipment would get through. Essentially they’ve put their eggs in one basket,” Thomas said. 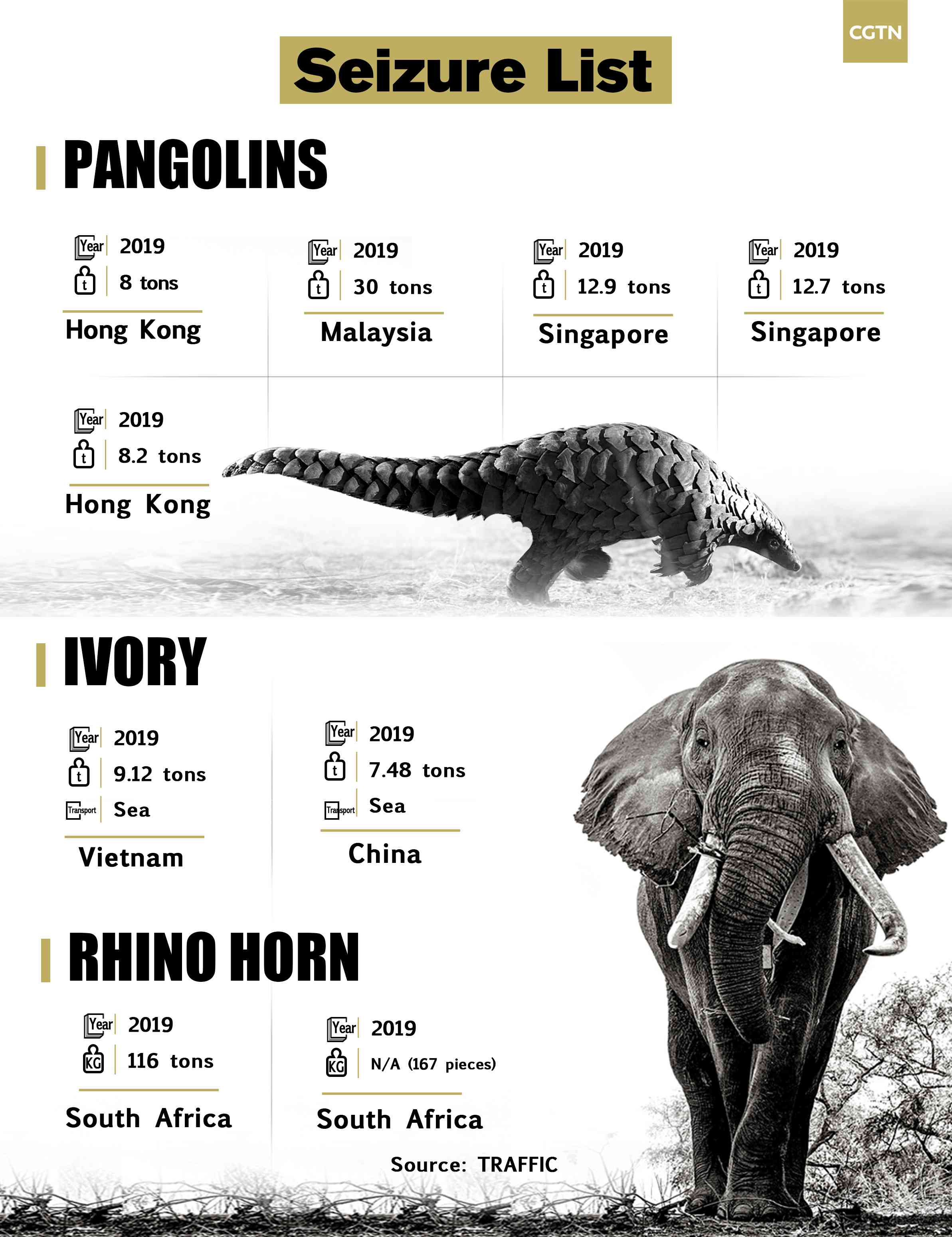 “It’s unlikely that such large consignments of pangolin, rhino horn and ivory could be sent along the supply chain from Africa to Asia without the aid of key personnel in the air and sea cargo handling as well as customs agencies,” Alex Hofford, a campaigner with WildAid Hong Kong, told CGTN.

But conservation agencies believe that this increased detection of the movement of illegal wildlife consignments won’t severely impact criminal syndicates.

“These major busts are going to mean significant setbacks for the traffickers, but it isn’t going to put them out of business,” Thomas said.

Around 20,000 elephants are poached every year in Africa to meet the global demand for ivory. A few species of rhinos are on the verge of extinction, and all eight species of pangolins have been declared endangered due to large-scale poaching.

Winnie Kiiru, the Kenya-based senior technical adviser to Elephant Protection Initiative, told CGTN that she shared the concerns of Thomas. She said the management of seized wildlife products remains a low priority in many African nations.

Moreover, the involvement of multiple agencies like customs and wildlife departments with different jurisdictions complicates the handling of stockpiles.

In most of the countries, there is no single agency in charge, Kiiru said.

“To resolve the issue, there needs to be a standard operating procedure for the security of wildlife stockpiles locked up in government strongrooms. Also, a strong national policy to ensure what needs to be done with confiscated wildlife products,” Kiiru said.

With stockpiles prone to theft, campaigners say stronger laws are needed in major transiting cities to keep a check on the illegal trade.