Arrested in 2016 after report to KWS officers 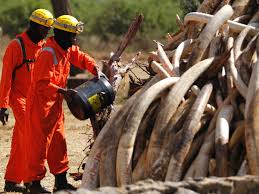 A Kibera court has directed a case involving four Administration Police officers charged with poaching to go ahead on April 29.

Senior resident magistrate Renee Kamau ordered that the three-year-old case be heard without any more delay.

Corporals Stephen Ngawai, Martin Mwiti, Francis Karanja and Constable Peter Kuria Kimungi, all based at the AP Security of Government Buildings, were arrested in March 2016 in Nairobi with a 5kg elephant tusk.

Chege and Mwiti were a driver and guard attached to a former Principal Secretary whose identity could not be revealed.

The suspects were in two Toyota Prados, one with a GK plate, when they were pulled over by the police after being followed for hours.

Five kilos of ivory were found in one of the vehicles after an extensive police search on site and at Lang’ata police station.

The arrest happened after KWS officers got an intelligence report on their illegal business. They were charged with being in possession of wildlife trophy.

The officers from the Kenya Wildlife Service also impounded one of the vehicles,  a Toyota Prado registered KAV 858F.