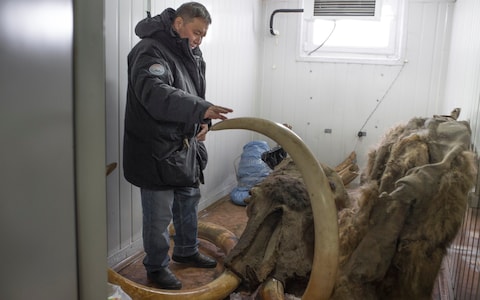 Valery Krivoshapkin was counting time in a motorboat on a river in the
Russian Arctic when another scuba diver tossed in the tusk of a woolly
mammoth that lived at least 10,000 years ago.

After a month of searching in a remote corner of the vast northern republic
of Yakutia, Mr Krivoshapkin’s six-man ?brigade? had retrieved only mammoth
teeth, a rib and part of a jaw, just enough to put them on the scent of a
bigger find.

The diving was dangerous, with headlamp visibility less than two feet and
the frigid black bottom cluttered by sunken trees. But on this August
afternoon, the agonising search had been rewarded with a mammoth tusk that
they would go on to sell to Chinese ivory carvers for ?8,000.

?I thought, I just got a lot richer? when the tusk was found, Mr
Krivoshapkin remembered.

China’s ban on elephant ivory last year has spurred on a mammoth tusk rush
in Yakutia, where an estimated 500,000 tonnes of mammoth remains lie
preserved in the permanently frozen soil.

More tusks are washing out of the ground than ever before thanks to climate
change, which has begun thawing the permafrost and increasing
precipitation.

Finding tusks has become the livelihood of many impoverished villagers in
northern Yakutia, but much of the trade remains under the table despite
attempts to regulate it.

Shady middlemen make the bulk of the profit, while illicit water pumps are
widely employed. Mammoth prospectors go broke as often as they strike it
rich, and a few even lose their lives in the hazardous quest for ?ice
ivory?.

?It really resembles the Klondike at the end of 19th century,? said Albert
Protopopov, head of mammoth fauna studies at the Yakutia academy of
sciences. ?The main profit goes not to those who search for tusks but to
those who finance it ? But in the north it’s the only way to make money,
since fishing is seasonal.?

?Mammoth tusks are crazy, they’re like a drug, they sell quickly,? said
Vadim Strochkov, whose company in the regional capital of Yakutsk is trying
to buy and export tusks legally. ?That’s why everyone wants into this
business.?

When the woolly mammoths mysteriously died out 10,000 years ago, their
remains were essentially put on ice in Yakutia, home of the coldest
permanently inhabited settlement on earth.

Japanese scientists have even partially revived cell nuclei from a
28,000-year-old mammoth found well-preserved in Yakutia, they said last
week.

Although many have wondered about the possibility of cloning these ancient
creatures, including Vladimir Putin when he visited Yakutsk’s mammoth
museum in 2014, current techniques will not allow it.

The first merchant expeditions to Yakutia in search of mammoth tusks to
sell to Chinese carvers date to the 18th century. The Yakut people have
been stumbling across mammoth bones since long before that.

Since the remains were most often found on eroding river banks, they knew
the extinct creature as the ?water ox?.

Myths envisioned winter as a giant water ox that came out of the Arctic
ocean; with each step south his horns grew bigger and the land grew colder.

A tusk carved by a Chinese master can sell for ?750,000 and up. Yakutia now
exports 70 tonnes of tusks to China each year.

About half off this trade is on the black market, local authorities have
previously estimated. Speculators buy tusks at dusty garages in Yakutsk for
up to ?300 per kilogramme and sell them for ?750 in Hong Kong, often
dodging export duties or even smuggling them across the border.

In December, a patrol seized 500 kilogrammes of mammoth tusks from a group
of Russians and Chinese on a border lake.

Meanwhile, those who try to export legally can spend months stuck in red
tape at customs, Mr Strochkov said.

As long as Russia’s parliament doesn’t pass a law reclassifying mammoth
tusks as a commercial product rather than a collector’s item, their sale
exists in a legal grey area.

Legislation to this effect has been stuck in parliament since 2013, and the
recent state television film Isle of Skeletons smearing tusk hunters as
?illegal prospectors? and ?evil-doers? gave little hope that this would
change.

?I think the government will help, but for now it’s only helping with
words,? Mr Strochkov said, complaining that without state investment he
can’t compete with Chinese buyers offering cash upfront.

But while searchers are supposed to only gather tusks from the surface of
their claim, it’s more effective to blast deep into the permafrost with
high-powered water pumps.

Mr Prokopyev admitted it was hard to monitor their far-flung, hard-to-reach
work sites in this republic a dozen times the size of Great Britain.

Although he insisted only a few ?poachers? rely on these devices, in
reality their use is widespread.

?The pumps give lots of material, several times more? than other methods,
Mr Krivoshapkin said.

Toiling under clouds of mosquitoes for several weeks each summer, tusk
hunters occasionally even find woolly rhinoceros horns, which can fetch
more than ?5,000 per kilogram for traditional medicine in Vietnam.

The water blasting muddies rivers and drives away fish, while the resulting
tunnels can collapse on those inside.

Conservationists have also raised concerns that elephant ivory could be
laundered in the guise of mammoth tusks.

But scientists in Yakutsk argued that the mammoth boom has saved elephants
while benefitting laboratories, since friendly tusk hunters sell or donate
well-preserved carcasses of mammoths, cave lions and other ancient
creatures that they find.

?In 300 years, not one important discovery of a mammoth was made by
scientists, they were all made by locals,? said Sergei Fyodorov of the
mammoth museum.  ?It’s a huge territory, and many finds are ruined by the
time scientists get there.?