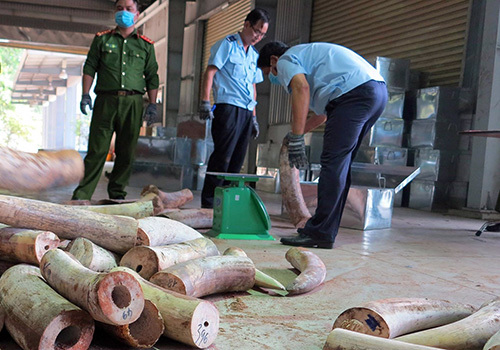 This is the biggest ivory seizure in recent years, police say. Police, border guards and customs officials have joined hands to investigate the case.

Preliminary investigations show that the containers were imported to Tien Sa from Congo, Africa. They are registered for a business in the neighboring Quang Nam Province.

Vietnam outlawed ivory trade in 1992, but the country remains a top market for ivory products prized locally for decorative and medicinal purposes, according to conservation groups.

The country is also a busy thoroughfare for tusks trafficked from Africa destined for other parts of Asia, conservationists say. A report from the Environmental Investigation Agency, a London-based NGO, last year ranked Vietnam among the top 10 countries for ivory smuggling.

Since 2009, Vietnamese authorities have been able to seize more than 56 tons of ivory. About 20 tons of ivory linked to Vietnam were seized in other countries in the same period. This is equivalent to nearly 11,500 elephants, the report said.