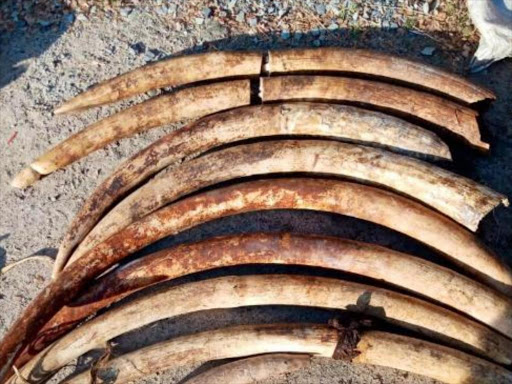 Three men have been arrested after they were found in possession of 13 kilogrammes of Ivory in Karen, Nairobi on February 26, 2019. / COURTESY

Three men have been arrested after they were found in possession of 13 kilograms of Ivory in Karen, Nairobi.

The three are Moses Leshinga, 24, Frankline Lekashina, 26, and Raymond Wambui, 32.

They were ferrying the elephant tusks when police were alerted and intercepted them on Tuesday.

Police say the tusks are valued at Sh1.5 million. The men are expected in court on Wednesday morning.

Cases of ivory trafficking have been on the decline in the recent past over ongoing operations by state agencies.

Kenya has been pushing for a total ban on ivory trade, warning that the trade risks wiping out elephants.

During the 17th meeting of the Conference of the Parties to the Convention on International Trade in Endangered Species of Wild Fauna and Flora, Kenya unsuccessfully sought to have a global ban on trade imposed.

A total of 29 African Elephant Coalition countries had thrown weight behind Kenya.

However, Namibia and Zimbabwe petitioned CITES to exempt their elephants from the ivory trade ban, on grounds that their populations are thriving.