Animals poisoned in protest over payouts 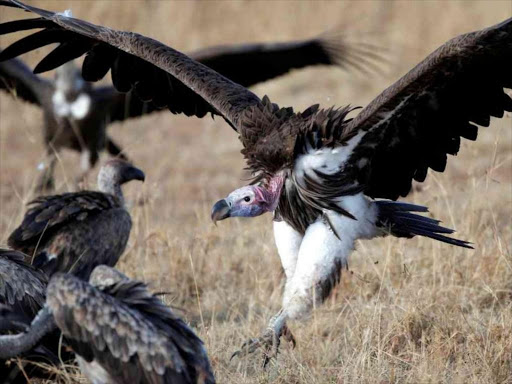 Victims of wildlife attacks and destruction have resorted to poisoning animals in protest against the government’s failure to compensate them.

In August last year, Tourism and Wildlife PS Margaret Mwakima said compensation claims from victims of human-wildlife conflict in the last five years were Sh15 billion. The claims are for residents who have either been killed or injured, and also those whose property has been destroyed by elephants and other wild animals.

Twenty endangered vultures were found dead on January 27 at the Masai Mara National Reserve. They had been poisoned. Five vultures were critically ill after feeding on poisoned hyena carcass.

Other deaths were prevented after hyena and vulture carcases were burnt to decontaminate the scene.

Those rescued were treated and released. Two were detained for a longer time for observation and thereafter released.

A wildlife conservation expert yesterday said the incident explained how devastating retaliatory wildlife poisoning is on populations of endangered vultures and other scavengers. He said many more would have died if the response was not swift.

Vultures scavenge in large numbers on carcases and often succumb to the poison.

The dead vultures were first discovered by Eric ole Reson of The Peregrine Fund and the Masai Mara Wildlife Conservancies Association.

Retaliatory poisoning occurs when predators such as lions, hyenas, and leopards attack livestock. Livestock farmers have adopted it. They lace their dead livestock with easily accessible chemicals intending to kill predators.

A report by Auditor General Edward Ouko says that communities hosting wildlife have failed to adopt conservation due to lack of awareness and also because they do not benefit. Instead, they view wildlife as KWS-owned, the June 2018 report says.

It blames the problem for the increased human-wildlife conflict and opportunistic poaching.

Prior to the vulture incident, efforts to stop poisoning had been successful. In the past two years, the overall poisoning of vultures in the Masai Mara has been reduced by more than 50 per cent. An intended poisoning of two lion prides was also averted.

This success is a direct result of in-depth research, awareness creation, identification of poisoning hotspots, and training of local community champions to respond rapidly and decontaminate poisoned carcases.

Vulture Conservation manager for Birdlife International in Africa Rebecca Garbett said “illegal wildlife poisoning is a huge problem for the future survival of vultures and carnivores across the continent.

“When scavengers and carnivores are lost from an ecosystem, the remaining imbalance can cause unexpected human and livestock health problems. The good news is that we have a strong network of people at all levels, working together to respond to a poisoning incident, saving birds from dying, and creating awareness about the value of vultures for the Masai Mara and beyond.”

The existence of vultures is crucial to society because they are productive and provide countless environmental services to humanity and biodiversity.