The cutting down of millions of trees has sparked angry clashes in parts of Uganda between local people and refugees who have been fleeing conflict in neighbouring South Sudan and the Democratic Republic of the Congo.

The timber is being used for house construction, fuel and to make charcoal. In the north and west of the country, where an estimated 1.1 million refugees are living, massive deforestation is drawing protests by local communities.

Joël Boutroue, representative for the UN refugee agency, UNHCR, said the settling of refugees was causing widespread environmental damage. “A refugee cuts [down] around 20 trees per year. [Locals] see their own environment being depleted increasingly,” he said.

“We want to be able to decrease the tensions. We really need to roll that back and the sooner the better.”

In October, a joint UN and World Bank report warned that “competition for available resources could become a source of tension between the refugees and host communities”. 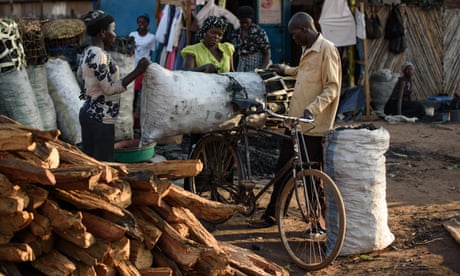 Thijs Van Laer, programme director at the International Refugee Rights Initiative, said deforestation was affecting both the environment and the co-existence of the two communities, often violently. The organisation has documented a number of clashes. “Refugees have complained that they have suffered abuses at the hands of Ugandans who oppose the sharing of these resources,” he said.

“Sharing of natural resources is often one of the main concerns raised by both refugees and Ugandans living close to the refugee settlements. This is the case for firewood, as well as for grass [used for thatched roofs], and to a more limited extent, land and water ponds,” said Laer.

“If nothing is being done, this will seriously put to the test the considerable hospitality that Ugandans living in refugee-hosting areas have been showing in recent years.”

The average daily consumption of firewood by refugees in northern Uganda is 1.6 kg per person and among host communities, 2.1 kg.

UNHCR now plans to plant 20 million trees or more this year, said Boutroue. “[Planting trees] is a sort of peacekeeping activity not in a military sense. But in the sense of maintaining harmony within communities.”

Cathy Watson, chief of programme development at the World Agroforestry Centre, welcomed the news that trees would be planted, but added: “Our concern is – can these seedlings be raised in time for the long rains which are almost upon us? And what species will be promoted?

“If it’s just one or two exotic species like pine and eucalyptus that could cause long-lasting ecological damage. We look forward to seeing a big range of exotics and native tree species.”

But Laer said deforestation would continue because “refugees do not receive anything to use as fuel, and thus look for firewood to prepare their meals”.