HONG KONG — It was after dark on a Tuesday evening in December 2017 when the vans pulled onto Island House Lane, a placid side street of residential complexes and community garden plots in the suburban Tai Po district.

High-rises gave way to lush forest as the street wound down to a pebble beach. Across the harbor was Tolo Channel, and jagged green hills descending into the sea all the way to the coast of China’s Guangdong province.

On the water, a speedboat was waiting. Men began unloading the vans’ cargo onto the beach.

When officers from Hong Kong’s Customs and Excise Department arrived, the boats fled out to sea. Marine officers pursued them for two hours before losing them in the channel’s warren of rocky coves and mangrove estuaries.

From the vans, however, officers were able to recover part of the contraband cargo.

There were about $1 million worth of mobile phones, digital cameras and tablets. And, packed into cardboard boxes, the agents discovered more than 300 kilograms of smooth brown scales, each a couple inches across, that looked like they had been stripped from some prehistoric reptile.

In fact, they came from pangolins: a housecat-sized, forest-dwelling mammal that resembles an armor-clad anteater. Pangolin meat is a delicacy in southern China, where it is critically endangered, and its scales are prized as an ingredient in traditional Chinese medicine.

Over the past decade, the animal has been hunted out of most of its range in Southeast Asia, and it is being poached at alarming levels in Central Africa. The pangolin’s value has increased with its rarity — the shipment seized in Tai Po had a street value of around $300,000.

In the geography of the illegal wildlife trade, Hong Kong occupies a unique and essential position. It is a city that has built its reputation and economy as a frictionless connector of countries and capital, located on the doorstep of mainland China — the most ravenous wildlife market in the world. 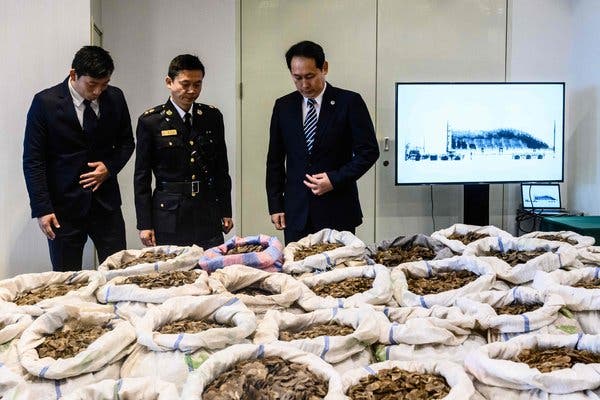 Over the past decade, the appetites of segments of the booming Chinese middle and upper class — for jewelry, artwork, traditional (though often scientifically uncreditable) remedies and exotic foods — have dramatically expanded a global wildlife black market that has decimated species in Africa, Southeast Asia and elsewhere.

The pangolin is the latest casualty: Four of the eight species are now endangered, and the international trade in pangolin products has been banned since 2016.

Researchers at the ADM Capital Foundation, a Hong Kong-based organization focused on environmental issues, recently analyzed data on seizures of wildlife products from the Customs and Excise Department.

In a report published last month by the Hong Kong Wildlife Trade Working Group, a consortium that includes the foundation, the researchers found that the territory accounted for more pangolin seizures than any country.

Between 2013 and 2017, Hong Kong seized 43 metric tons of pangolin scales and carcasses — representing tens of thousands of animals — in shipments arriving from six countries, principally Cameroon and Nigeria.

The amount intercepted between 2013 and 2015 alone is equivalent to 45 percent of all the pangolin products seized worldwide between 2007 and 2015, according to the most recent figures from the United Nations Office on Drugs and Crime.

Although the data analyzed by the foundation does not include 2018, pangolin seizures nearly doubled from 2017 to 2018. In January 2019, Hong Kong authorities intercepted the territory’s largest-ever shipment of pangolin scales, nine tons in all, on a cargo ship bound to Vietnam from Nigeria.

The pangolin products appear to have been mostly destined for mainland China — though they are not hard to find in Hong Kong, either. On the well-trafficked Queen’s Road in the Sheung Wan district, the clerk at one small shop, presiding over a counter piled with dried goji berries, almonds and mung beans, readily offered pangolin scales to an inquiring customer.

“We sell a lot, and we’ve been doing this business for a long time,” she said. One liang — a Chinese measure equal in Hong Kong to about 37.5 grams — retailed for 300 Hong Kong dollars, about $38. “It’s quite luxurious,” she said.

While the shop was careful not to keep the product on the premises, she said that with a phone call it could be delivered in half an hour, and getting it across the border undetected was easy.

“We’ll just grind it into powder,” she said. In order to avoid getting caught, she advised, “don’t get too much at one time.”

A pipeline for illegal trade

In recent years, as alarm has grown about both the ecological consequences of the illegal wildlife trade and its links to other forms of crime and security threats, many countries have significantly stepped up their response, stiffening laws and increasing the resources dedicated to enforcing them.

In the United States, wildlife trafficking is now often prosecuted under muscular organized-crime statutes. The U.N. describes the trade in wildlife as “one of the largest transnational organized criminal activities.”

Hong Kong stands out against this trend, conservationists here charge. While other countries with the political and law-enforcement capacity to fight wildlife trafficking have begun to do so, the territory’s government — which is otherwise relatively aggressive in combating corruption, organized crime and other ills — has appeared reluctant to follow suit, even as an enormous share of the illegal trade passes through the territory’s airport and shipping terminals.

The territory’s Customs and Excise Department estimates the wildlife contraband it has seized over the past five years — by value, principally pangolin, elephant ivory and timber — to be worth more than $71 million, a figure that suggests the possibility of a billion-dollar illicit industry.

But environment and law-enforcement officials routinely reject the notion that these seizures suggest the existence of serious criminal enterprises. “We do not have very strong evidence that organized crime is organizing” the Hong Kong wildlife trade, said Tse Chin-wan, Hong Kong’s under secretary for the environment, in an interview in August.