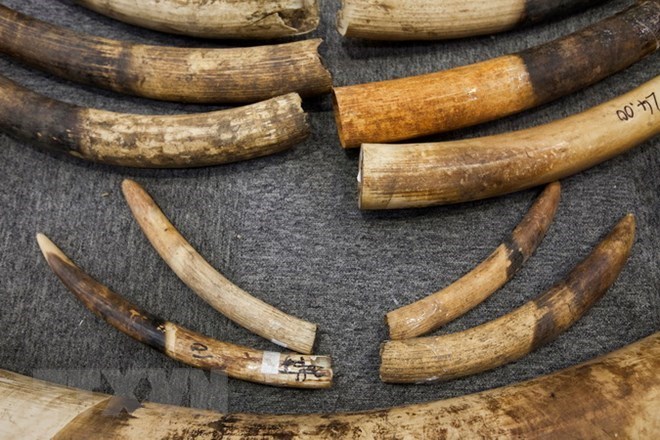 Hanoi (VNA) – The People’s Procuracy of Hanoi city has completed the indictment to prosecute Nguyen Huu Tien, born in 1983, residing in Thuong Tin district, for the charge of violating regulations on the protection of endangered and rare animals under Article 244 of the Criminal Code 2015.

The punishment for Tien is from 10 to 15 years of imprisonment, according to the indictment.

On August 17, 2018, the Investigation Police Agency of the Hanoi Department of Public Security coordinated with police in Nhi Khe commune (Thuong Tin district) to conduct an administrative inspection of Tien’s carpentry workshop.

They discovered a white bag containing 27 logs in different sizes weighing 7kg in total which are suspected to be ivory.

While raiding Tien’s house, the relevant forces continued to seize many crafts weighing a total of 85kg which are suspected to be made of ivory.

The testing results of the Institute of Ecology and Biological Resources under the Vietnam Academy of Science and Technology showed that all the logs and crafts are African ivory, which is scientifically called Loxodonta Africana.

This animal species is listed in the annexes of the Convention on International Trade in Endangered Species of Fauna and Flora, which the Vietnamese Ministry of Agriculture and Rural Development promulgated in February 2017.

Tien confessed that he knew a man named Tuan from Thanh Hoa province in late 2017. Tuan sold around 46 kg of ivory worth 9 million VND (387 USD) each for Tien to craft into jewellery and fine arts for sale.-VNA