Two years ago, the chiefs of anti-poaching at Kruger and Hluhluwe-iMfolozi both told me that Czech-made high-powered hunting rifles were being taken from Mozambican poachers. They believed that the guns were imported to be used by Mozambican wildlife rangers but had been corruptly sold to or given to as part of a guns for rhino horn/ivory deal with poachers. KS

HOEDSPRUIT, South Africa — High-powered hunting rifles are the tools of the trade for poachers in South Africa and Mozambique. Steady and deadly accurate, the rifles are capable of dropping a rhinoceros with one shot from long distances, and are a major reason the rhinos in those African countries, highly valued for their horns, are dwindling toward extinction.

Three years ago, Sandy McDonald began finding the rifles, left behind by poachers, scattered near the dead rhinos he found in the game reserve he owns in Mozambique, just across the border from South Africa.

Mr. McDonald immediately recognized the weapons. They were .375-caliber Safari Classics, made by CZUB or just CZ, a firearms manufacturer based in the Czech Republic. Upon closer inspection, Mr. McDonald noticed something else on the rifles. Carved into the metal were the words “CZ-USA, Kansas City, KS,” suggesting that the weapons were from the American subsidiary of the arms company.

“Coming from a firearms background I recognized that these were rifles that are quite common in the U.S.,” Mr. McDonald said. “It left me wondering how they got out of the U.S. and into the hands of Mozambican poaching syndicates.” 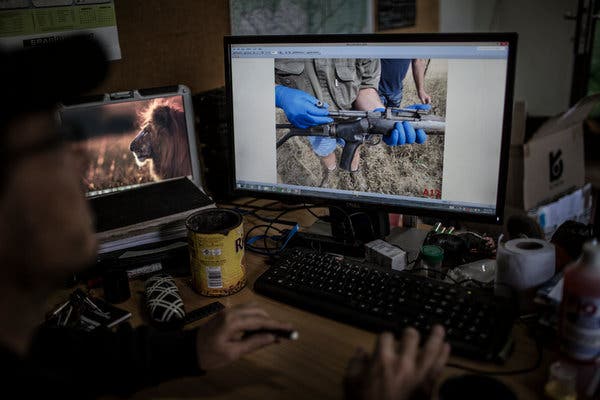 His question is at the heart of multiple investigations by a congressional committee and an array of federal agencies into whether an American gun manufacturer has become entangled in the shadowy and illegal world of arms smuggling and wildlife poaching that both President Trump and former President Barack Obama have committed to combating. Neither CZ nor its American subsidiary has been accused of a crime by federal authorities.

In a 2013 executive order, Mr. Obama called wildlife trafficking a national security issue because of its devastation of African wildlife and its destabilizing effect on local communities. Another order signed by Mr. Trump last year directed law enforcement agencies to increase their efforts to dismantle transnational smuggling organizations, including wildlife traffickers.

The American government has also stationed law enforcement officers from the United States Fish and Wildlife Service in several African countries, including Botswana, to help local officials fight poachers. Over all, the American government spends about $150 million a year in efforts to fight wildlife trafficking and poaching.

Now agents from the Commerce Department and the Department of Homeland Security are investigating whether CZ or its subsidiary violated American laws by exporting rifles to Mozambique and whether the company continued to sell weapons even after being warned as early as 2015 that the rifles were used by poachers to kill protected wildlife in South Africa.

This fall, the House Foreign Affairs Committee began its own investigation into the use of possible illegally exported rifles in poaching crimes, requesting from federal agencies “any and all information related to CZUB and its subsidiary CZ-USA and the selling of rifles to transnational criminal organizations,” according to a staff member on the committee, who spoke on the condition of anonymity because he was not authorized to talk publicly about the investigation.

After decades of poaching, there are now fewer than 30,000 rhinoceroses worldwide, down from 500,000 in the early 20th century.CreditGulshan Khan for The New York Times 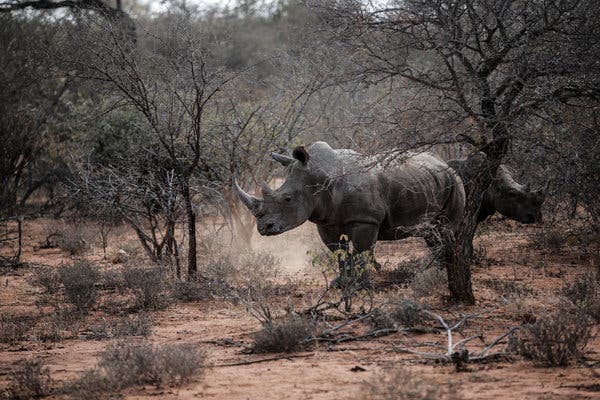 High-powered rifles are a major reason the rhinos in South Africa and Mozambique, highly valued for their horns, are dwindling toward extinction.CreditGulshan Khan for The New York Times 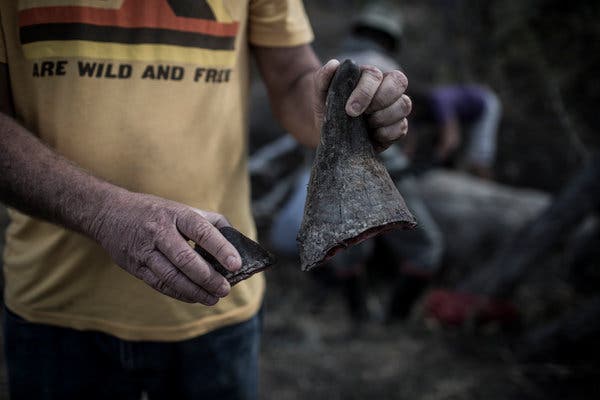 A United States law enforcement official said as many as 100 Safari Classics found on African game reserves appear to have been manufactured by CZ-USA, which is based in Kansas City, Kan.

“Although the firearms were marked ‘CZ-USA,’ the U.S. entity CZ-USA had nothing to do with the rifles,” Petr Kallus, a company executive, wrote in a response to questions from The New York Times. “Rather, the marking ‘CZ-USA’ was applied to the rifles by CZUB as an international brand name only.”

Mr. Kallus also said the company ceased delivery of firearms after being told that the firearms shipped to Mozambique had been used in wildlife crimes. (An American law enforcement official confirmed that the company stopped selling weapons but said it was only after the company was warned that it could be added to one of several government lists of bad corporate actors.)

Wherever they are made, the weapons have had a disastrous effect — the latest factor in the precipitous decline in the worldwide rhino population from 500,000 in the early 20th century to fewer than 30,000 today, with the vast majority in South Africa.

A 2015 report by Small Arms Survey, a Switzerland-based research group, showed that the free flow of high-powered rifles and other weapons in Africa has significantly increased the scale of poaching. In turn, that has bolstered the illicit arms trade.

Protrack, a private anti-poaching company, began finding the CZ rifles near rhino carcasses as early as 2011. “We didn’t see this level of poaching until these high-powered rifles were introduced into the system,” said Vincent Barkas, Protrack’s owner.

Police records and incident reports from similar anti-poaching watchdogs indicate that 90 percent of all weapons found at wildlife crime scenes in South Africa and Mozambique since then were CZ rifles.

As the number of rifles found at wildlife crime scenes soared, alarmed conservation and anti-poaching groups reached out to Kathi Lynn Austin, a former United Nations arms-trafficking expert who had worked on the investigation of Viktor Bout, the notorious Russian arms dealer. Ms. Austin is executive director of the Conflict Awareness Project, an organization that investigates international arms trafficking.

Over the next two years, and armed with incident reports, interviews, rifle serial numbers, shipping receipts and other records, Ms. Austin pieced together the trail of the rifles sold from CZ as they made their way into the hands of poachers. Her findings were the basis of the government investigations now underway.

“Millions of dollars were being poured into anti-poaching efforts, including arming rangers and private companies with more and more weapons, which had just created an arms race,” Ms. Austin said in a recent interview. “But not one was tracing the source of the guns found on the poachers or at the scene of the crime.”

In 2016, Ms. Austin, attended a gun show in Las Vegas after learning that CZ-USA officials would be there. Ms. Austin said she observed CZ and CZ-USA company representatives meeting with several Mozambican companies. She had earlier traced several weapons CZ sold to those companies that were later found at poaching crime scenes in South Africa.

Ms. Austin said she later met with a whistle-blower from one of the companies who shared with her emails between the company and CZ sales offices. It is unclear if the weapons were sold from the parent company or its American subsidiary. Ms. Austin also shared emails with The Times showing that she had warned CZ-USA that weapons with the company’s markings were showing up at wildlife crime scenes in South Africa.

“CZ and its American subsidiary, at a minimum, knew that the weapons it was selling were being used for poaching,” Ms. Austin said in an interview. “They knew and continued to look the other way as dozens, perhaps hundreds, of their weapons continued to show up in the hands of poachers.”

Emails obtained by Ms. Austin and federal investigators show that the Czech company was made aware that Safari Classics with the Kansas branding were used to poach rhinos at least as early as May 2015. Ms. Austin said she personally met with company officials and told them that their weapons were being used in wildlife crimes.

But while company officials insist that all Safari Classics that are for export are made in the Czech Republic, CZ-USA’s own sales catalogs advertise rifles that are built to order by Triple River Gunsmithing, a small family-owned company in Warsaw, Mo.

Meagan Satrang, a gunsmith and the daughter of the store owner, Harlan Satrang, confirmed in an interview that the company has built Safari Classic models since 2004.

Only recently, she said, did she learn that two models of the Safari Classic — the .416-caliber and the .375-caliber — are built by CZ manufacturers abroad, she said.

“But they shouldn’t have the U.S. markings on them,” Ms. Satrang said.

In emailed answers to questions posed by The Times, CZ executives gave a different explanation for how the Safari Classics are made. The company said all of the weapons were manufactured in the Czech Republic, and the American markings were added to the Safari Classics there.

A late-night patrol for poachers in South Africa, which contains the vast majority of the rhino population.CreditGulshan Khan for The New York Times

CZ executives said a limited number of the Safari Classics are made specifically for the American market and stamped with the Kansas branding. But since CZ-USA was not able to place orders for all the rifles that the parent company makes for the American market, Mr. Kallus said, some of the weapons were instead sold to customers elsewhere in the world, including in Mozambique.

Mr. Kallus insisted that even though the weapons were intended for sale in the United States, they were never shipped into the country. He added that once the weapons are sold, the company has no legal responsibility.

CZ said some of the rifles sold in the United States could have been brought to Mozambique and South Africa by hunters. Ms. Austin agreed that hunters could have left some of their Safari Classics behind; American hunters can take their weapons to another country if they file documentation to temporarily export a personally owned firearm for hunting.

But Ms. Austin said given that the vast majority of the hundreds of CZ-USA rifles that have been recovered at poaching sites were traced to gun sales in Mozambique, it is unlikely they were all left by hunters.

“All of these weapons didn’t come from hunters,” Ms. Austin said. “The records just don’t show that.”

A version of this article appears in print on Dec. 26, 2018, on Page A10 of the New York edition with the headline: When American Rifles End Up in the Hands Of Poachers in Africa. Order Reprints | Today’s Paper | Subscribe