New York TimesThe country is a critical market for animal contraband. Some scientists fear the official commitment to conservation may be wavering.

Many of the creatures that share this planet with us may not be around much longer.

Since 1970, populations of thousands of animal species around the world have declined 60 percent on average, according to the World Wildlife Fund. Habitat destruction, climate change and pollution are all driving those losses.

But so is the global illegal trade in wildlife. For species like tigers and rhinos, poaching is a primary threat to survival.

“Very few ecosystems are not affected by wildlife trade,” said Vincent Nijman, an anthropologist at Oxford Brookes University in Britain. “It directly impacts a very large number of species, and has a knock-on effect on many more species still.”

But, as Dr. Nijman pointed out, any solutions for tackling illegal wildlife trade are unlikely to work without the involvement of one major player: China.

From ivory to pangolin scales, totoaba bladders to shark fins, the country has a ravenous appetite for wildlife products. As China’s economy and population have grown, so, too, has demand for animals and their parts, which are sought worldwide: in Southeast Asia, Africa, South America and the world’s oceans.

Until recently, China seemed to have signed on to the cause. President Xi Jinping, who has pledged to turn the country into an “ecological civilization,” stepped up seizures of contraband animal products and created a new national park to provide a haven for Siberian tigers. In January, Mr. Xi banned the domestic trade in ivory.

But lately China has sent conflicting signals. To the shock of officials and conservationists around the world, China announced last month that it would reopen the trade in rhino horn and tiger bone, reversing a 25-year domestic ban.

“This development came as a surprise to us, because China, at the moment, is leading in so many ways on the environment,” said Erik Solheim, the executive director of the United Nations Environment Program. “We should be stepping up protection for tigers and rhinos, not lowering it.”

China’s State Council directed that rhino horn and tiger bone be limited to use in scientific research and in traditional Chinese medicine, practiced by qualified doctors at certain hospitals.

Officials also pledged to strictly control trade, a reassurance that did little to assuage concerns that poaching was about to spiral even further out of control. 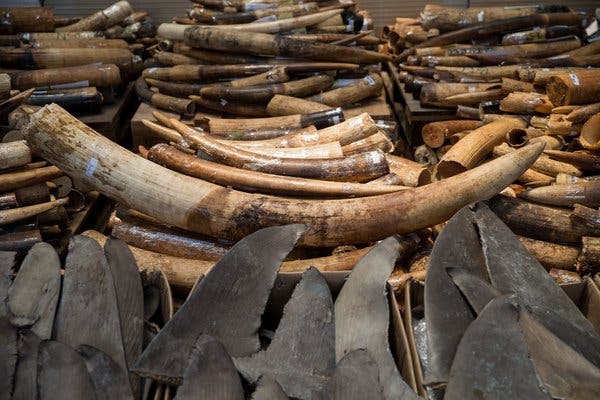 Indeed, just three days after China’s announcement, Jose Louies, chief of the wildlife crime control division at the Wildlife Trust of India, received a call from an informant who said that tiger traffickers had begun anticipating a price increase.

“Poachers keep their ears to the ground — they feel everything that is happening in the market,” Mr. Louies said. “It’s not a secret for them that all the tiger materials are going to China.”

Following a global outcry, the State Council this month reversed course and postponed implementation of the order. But the episode has left conservationists wary — not least because the history here is far from encouraging.

The Convention on International Trade in Endangered Species of Wild Fauna and Flora (Cites) banned international commercial trade of rhinos and most tigers in 1975. But for decades afterward, China permitted domestic sales of products made from these animals.

We’ll bring you stories that capture the wonders of the human body, nature and the cosmos.Rhino horn and tiger bone were smuggled into the country from abroad, and tiger farms were set up in the late 1980s — some with government backing — to breed big cats for bones, skins and parts. (Wild tigers had been mostly poached in China years earlier.)

And a few we’d rather not discuss

In 1993, under a law called the Pelly Amendment, President Bill Clinton threatened China with sanctions for undermining the Cites treaty. China responded with a ban on rhino horn and tiger bone, and poaching declined significantly.

“By banning those products, the Chinese government made a significant contribution to conservation of rhinos and tigers over the past twenty years,” said Zhang Li, a field biologist at the Beijing Normal University.

Practitioners of traditional Chinese medicine quickly followed suit, replacing the banned materials with sustainable substitutes and removing tiger bone and rhino horn — which have no scientifically proven benefits — from textbooks and the pharmacopoeia.

“If the government’s intention by lifting this ban is to support Chinese medicine, the result is the opposite,” said Lixin Huang, executive director of the American College of Traditional Chinese Medicine in California.

She suspects that the decision was encouraged not by practitioners of traditional medicine, but by “those dealing in the business of profit-making” — tiger farmers.

Workers at the Kenya Wildlife Service drilled a GPS tracker in the horn of a tranquillized black rhino.CreditBaz Ratner/Reuters 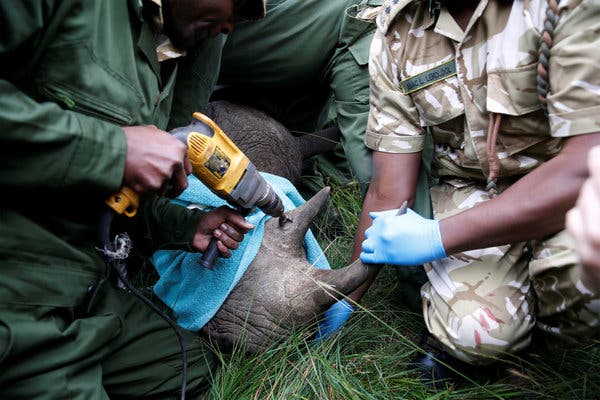 In September, Cites identified 36 Chinese tiger farms that seemed to be involved in illegal trade or else held tigers in questionably excessive numbers.

But at a Cites meeting last month in Sochi, Russia, Chinese officials strongly opposed the findings, according to Heather Sohl, a chief adviser at the World Wildlife Fund who attended the meeting.

Officials did not mention the country’s impending decision to reopen trade.

“China has quite often restricted progress on tackling tiger trade discussions we have at Cites,” Ms. Sohl said. The fact that officials questioned proposals to control tiger trade “wasn’t unusual and didn’t give us any insight that this was coming.”

Michael ‘t Sas-Rolfes, a doctoral researcher at the University of Oxford who toured tiger farms at the invitation of the Chinese government in 2007, was not surprised.

Even as Western countries have pushed for blanket bans on certain wildlife products, he continued, demand for those products in certain quarters of Asia has not fallen. Instead, illegal trade and the profits to be made from it have increased.

“I’m hoping that China’s move may serve as a bit of a wake-up call that the ‘just say no’ approach doesn’t work,” Mr. ‘t Sas-Rolfes said.

“The conversation on drugs has evolved into something more sophisticated — smoking pot is not the same as shooting up with heroin. And we need to apply the same nuanced, evidence-based thinking to wildlife trade.”

Some are eager to see China’s markets reopen.

“Rather than criminals coming here, wantonly killing our animals, we can now supply horn from stockpiles to meet the demand and take pressure away from wild populations,” said Pelham Jones, chairman of the Private Rhino Owners Association in South Africa.

China’s directive specified that tiger bones and rhino horns must come from farmed animals, but not that they be farmed in China. Conservationists believe the number of rhinos in China to be very small.

By contrast, over 7,000 rhinos live on at least 300 private ranches in South Africa. Nearly 90 percent of rhino owners are keen to sell their animals’ horns, which can be clipped every few years.

The profits, they say, will help cover the steep security costs of keeping poachers at bay.

“There’s only one country in the world that can meet China’s demand, and that’s South Africa,” Mr. Jones said.

Whether a proposal to reopen international trade of rhino horn could pass at Cites depends on a number of technicalities in the treaty and on whether proponents could rally enough support.

Cites currently states that countries should not breed tigers for their parts — only for conservation — and that they should reduce their use of rhino horn. But Cites governs only international trade, so provisionsin the treaty about domestic trade do not carry the same enforceable legal weight.

The United States has started looking into options of its own for ensuring that China’s domestic ban on tiger and rhino trade remains in place, said Christine Dawson, director of the office of conservation and water at the State Department. That includes the possibility of recertifying China under the Pelly Amendment, which would pave the way for sanctions.

“There’s a lot at stake for these two major economies, and the leverage may never be better for the U.S. to fold this issue into the broader trade issues going on right now,” said David J. Hayes, executive director of the State Energy & Environmental Impact Center at New York University.

Mr. ‘t Sas-Rolfes pointed out, however, that the Pelly Amendment might have lost its potency in a China with rising influence on the world stage. In any event, officials now may simply decide not to follow through with the directive.

“Let us hope that China recognizes the stark inconsistency of this decision with its laudable stance on ivory, and takes steps to ban the trade of rhino horn and tiger bones altogether,” said Boris Johnson, the former foreign secretary of Britain.

Whatever comes of the tiger bone and rhino horn controversy, Dr. Nijman emphasized that global collaboration — and perhaps compromise — with China might be key to solving the much bigger challenge of illegal wildlife trade.

“That means trying to better understand the Chinese way of thinking and working directly with them for solutions,” he said. “The solutions may not be the ones we initially thought were perhaps best from our Western perspective, but ultimately they may be the only way forward.”