Sources in Kenya tell me that all 11 have died – the last one after a lion attack when it was in a weakened condition.KS

The only rhino to survive a bungled relocation to a Kenyan wildlife park has been attacked by lions, Kenya’s tourism minister, Najib Balala, has said.

Ten out of 11 black rhinos died last month in their new home in Tsavo East national park after being moved by the state wildlife service, prompting protests from conservation groups around the world.

Balala said an independent inquiry had found that negligence by conservation officers was to blame for the deaths. The report found the animals had succumbed to stress and poisoning from drinking salty water, he added.

“Unfortunately, the 11th rhino has been attacked by lions. Yesterday it was treated. So far we are monitoring this 11th rhino. It’s a sad situation,” he said. 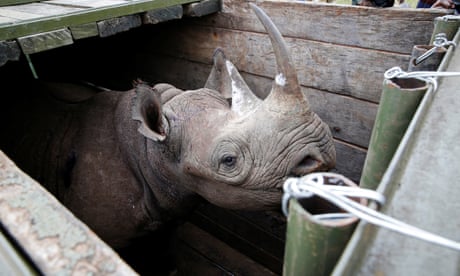 Eight of 14 rhinos die after move to Kenyan national park

Six conservation officers have been suspended following the inquiry, he added.

“Even one rhino is a huge loss. So we are sad and we are disappointed in some of the officers who should have taken responsibility. They didn’t take their work seriously. They were casual in their job.”

The Kenya Wildlife Service (KWS), whose employees handled the relocation, did not respond to calls for comment.

Poaching has risen in recent years across sub-Saharan Africa where armed criminal gangs have killed elephants for tusks and rhinos for horns. Often the animal parts are shipped to Asia for use in ornaments and medicines. 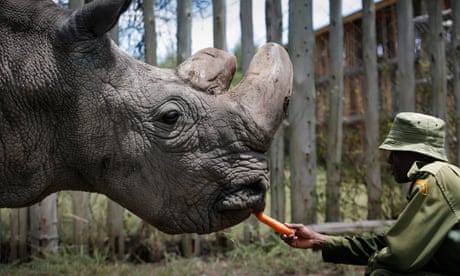 In May three black rhinos were killed by poachers in Meru national park in Kenya, a country heavily dependent on wildlife tourism.

The world’s last male northern white rhino died in Kenya in March, leaving only two females of its subspecies alive.

A tenth rhino has died after being moved to a different Kenyan national park, the government said, as it announced the results of investigations into previous deaths.

Autopsies found the water at the endangered black rhinos’ new home, Tsavo East National Park, was too salty and harmful to them.

They were taken there in an attempt to start a new rhino population.

Eleven rhinos were moved. The survivor was injured in a lion attack.

Estimates suggest there are fewer than 5,500 black rhinos in the world, all of them in Africa and some 750 in Kenya.

Eight of the animals that were moved came from Nairobi National Park and a further three from Nakuru National Park.

After the first eight rhinos died, the government announced an investigation led by the Directorate of Criminal Investigations.

Speaking at a press conference, Tourism Minister Najib Balala confirmed the initial belief that water with a high concentration of salt at Tsavo East had harmed the rhinos.

Before the government moved the rhinos, samples of the water had been taken but the results were not considered, he said.

The rhinos that were examined had died from dehydration, upper respiratory tract bacteria and gastric ulcers, he added.

The minister blamed government officials for negligence, poor co-ordination and poor communication which caused the deaths.

A total of 14 rhinos were earmarked for the move, but the government cancelled the transportation of a further three from Nakuru after the first deaths.

Rhinos are often moved when their populations outgrow their surroundings. In the case of critically endangered black rhinos, the moves can establish new breeding habitats to boost numbers.

Nine rhinos were killed in Kenya last year, according to KWS, and in March, the world’s last surviving male northern white rhino died after months of poor health.

He had previously joined the dating app Tinder to raise funds for his conservation.