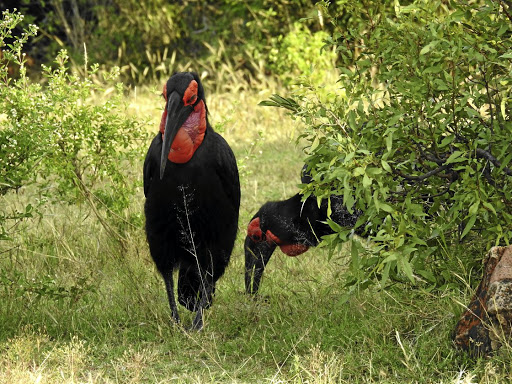 In need of a hand: Southern ground hornbills are under threat from loss of habitat and consumption of poisons. Picture: LESLEY STONES

If reincarnation is a thing, one of the worst life forms in which to return must be the chick in the second egg laid by a southern ground hornbill. The second hatchling can expect utter neglect from its parents to the point where it dehydrates and dies.

Worse, the mother might eat it. It will only survive if the elder sibling is weak and weedy and is abandoned. Not surprisingly, the large, ungainly and extremely noisy birds are flapping towards extinction.

“There are an estimated 2,000 birds left in SA in 400 to 500 breeding groups and if we don’t do something about it we are going to lose them altogether,” says Dr Lucy Kemp, manager of the Mabula Ground Hornbill Project. “With 60% of their land and 50% of the population lost in the last 30 years, it’s probably the swiftest-declining bird species in SA.”

The project is based in Mabula Private Game Reserve near Bela-Bela in Limpopo. Since it was founded in 1999 it has been experimenting with hand-rearing abandoned chicks and releasing them into the wild to rebuild the population.

It’s a tricky task. They are rescued from nests before they die and thrive on a diet of chopped-up mice. But their human rescuers can’t teach them how to be birds. 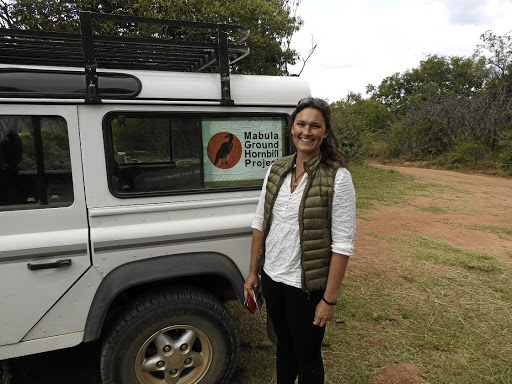 Making a difference: Lucy Kemp, manager of the Mabula Ground Hornbill Project, says there are about 2,000 birds left in SA and they may be the swiftest-declining bird species in the country. Picture: LESLEY STONES

“Some bird species just hatch and get on with it, but others need a support and learning process. They kill highly venomous snakes like puff adders and need an experienced member of the group to show them how to kill them, and where to sleep safely and how to avoid cheetah,” says Kemp. “Ground hornbills are really naive for the first three years of their lives. They’re high-maintenance chicks.”

After a chick is fit enough to survive, it’s released into a wild family. But this year there’s a problem. Storm, the alpha male at Mabula, hasn’t taken to a newcomer. He probably thinks his family of four is large enough. He raided a neighbouring hornbill family in 2017 and kidnapped their newly inserted chick.

“It made his army bigger and took away a soldier from the neighbouring group. We suspected this happens, but this is the first time it’s been documented,” Kemp says.

Southern ground hornbills live in a patriarchal society. Only the alpha pair breeds, and the subservient males help to defend the territory and become food fetchers after a chick is hatched by the alpha pair.

A chick grows to its full adult height within three months, so it takes the whole family to feed it snakes, scorpions, mice, small birds and other delicacies.

Young females are kicked out after one or two years and have to make it alone. They may team up with other females or hang around with baboons.

“Eventually an alpha female will die and, in a high-density population like the Kruger National Park, a replacement can happen within 24 hours.”

Kemp is a qualified zoologist who joined the project seven years ago, continuing work started by her father, Alan, a world expert in ground hornbills. “My dad started all the research in the Kruger in the 1960s and then it was just ‘this is a really interesting species, let’s observe it’,” she says.

Then he realised the population was declining and conducted experiments to see if chicks born second could be removed from wild nests and hand-reared.

There is now chick-rearing at several centres, including Montecasino Bird Gardens, with an average of five birds released each year.

“The chicks were basically healthy but we weren’t getting the behavioural stuff right,” Kemp says.

A new rearing facility is being built at Loskop Dam Nature Reserve in Mpumalanga that will house up to 15 chicks after each annual hatching season, with hand-rearing experts from local and international conservation partners assisting.

The chicks will then spend three to four years with foster families in a “bush school” to learn how to be hornbills. After they know enough, they will mentor a new cohort of hand-reared chicks, and form new families in the wild.

“We want to produce 15 high-quality birds a year, then we can rebuild the population by using the chicks that would naturally die,” says Kemp.

“It’s taken a long time to figure out how to hand rear them, but if we harvest them within two days of hatching before dehydration and organ failure, we now have a 90% success rate.”

Selecting only the strongest chick to survive has kept the species alive for eons, but human threats have decimated the population. Each family needs territory of about 100km² and their land has been lost to farms and timber forests.

Many die from eating poisoned bait put out to kill jackals or leopards, so the Mabula team is trying to persuade farmers not to use it.

Some are electrocuted, as their grand wings and large bills spark on power lines. Rat poisoning claims others, or lead poisoning if they eat a carcass killed by lead shot.

Some die by flying into windows or into shiny cars because they mistake their reflection for a rival and launch fierce attacks.

Ground hornbills can’t build nests, so they incubate their eggs in the hollows of large trees. The same nesting site can be used for generations, but if the large trees are destroyed, they stop breeding if no other nesting hole exists. In the Kruger one family didn’t breed for 20 years because there was no suitable site in their home range. The project now provides artificial nests.

The species seems hell bent on its own destruction, as if goading the law of natural selection to wipe it out. There is an element of that, Kemp says, but it’s mostly humankind fuelling their destruction.

“If humans weren’t destroying everything they’d be fine. They are not built for this fast-paced world, but that doesn’t mean we can’t give them a chance,” she says.