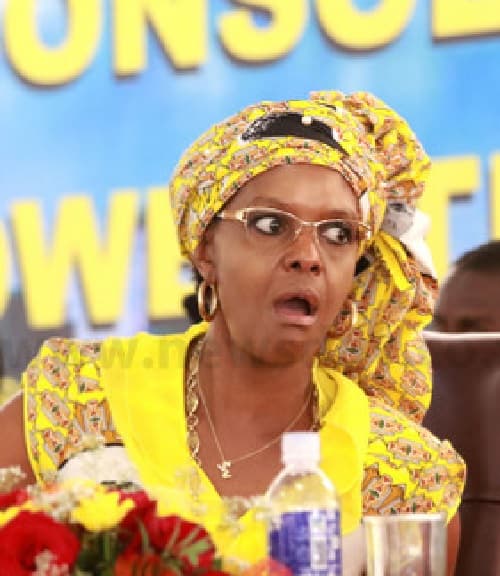 HARARE: Police are investigating former First Lady Mrs Grace Mugabe for
allegedly smuggling ivory worth millions of dollars to underground foreign
markets. Parks and Wildlife Management Authority investigators have since
submitted key documents relevant to the allegations to the police.

Preliminary indications are Mrs Mugabe spirited large consignments of ivory
to China, the United Arab Emirates and the United States, among other
destinations. She could be questioned by law enforcement soon, alongside
officials in the Office of the President and Cabinet who she allegedly
ordered to facilitate the illicit deals.

Police spokesperson Senior Assistant Commissioner Charity Charamba told The
Sunday Mail, “A report was made by an anonymous source and investigations
are on, although still in early stages.” Information at hand suggests Mrs
Mugabe ordered officials to issue her with export permits under the pretext
that she was sending the ivory to leaders of various countries as “gifts”.

Once outside Zimbabwe, it is alleged, the “gifts” would be pooled with
other consignments of the product and routed to black markets. It is
believed Mrs Mugabe involved OPC officials in obtaining the permits which
are issued in terms of the Convention on International Trade in Endangered
Species.

At one point, the officials allegedly forced Zimparks Director-General Mr
Fulton Mangwanya to sign for consignments he had not inspected. On October
29, 2017, officials reportedly acting on Mrs Mugabe’s instructions wrote to
Mr Mangwanya saying: “Urgent Cites permit is being sought to clear State
gifts presented by the principal to guests from China on Sunday, 29 October
2017.
“?The guests will be returning to China on Monday, 30 October 2017 with
morning flight which will depart Harare International Airport at 0800hours,
hence requesting that the urgent Cites permit should be ready today
(Sunday, 29 October 2017). “The gifts have been purchased by Office of the
President and Cabinet from F Madzinga Ivory Manufacturers of Harare.”

Several other such letters were written between 2016 and 2017.

Mr Mangwanya told this paper, ?In October last year, I was phoned by a lady
(name supplied) from State House who demanded that I sign the permits so
that the artefacts could be sent to China. “I couldn?t sign, but the lady
threatened me, saying the First Lady would call me directly to deal with
the issue. I wasn’t happy about the whole process because I had not seen
the consignment. I could not just append my signature. ?I wanted everything
to be done in accordance with the laws of the country and Cites
regulations. I want to mention that ever since the coming of the new
dispensation, poaching levels have dropped sharply in Hwange because the
market has been disturbed.”

Zimparks spokesperson Mr Tinashe Farawo added: ?The Zimbabwe Republic
Police have requested permit documents processed by one F Madzinga with a
view to photocopying them.

?The international relations office, in liaison with the investigations
office, recommends that the documents be accompanied by senior ranger
(security) Cavin Majuru and senior ranger (permits) S Gushe.?

President Mnangagwa’s Special Advisor, Ambassador Christopher Mutsvangwa,
said the OPC was seized with the matter. “Investigations are certainly on.
We received a report from a whistleblower and some of her clients. Police
and the whistleblowers laid a trap for suppliers believed to be working for
Grace Mugabe.

“The culprits were caught and that is how the investigations started. When
we were confronted with so much evidence, there was no way we could ignore;
we had to act.”

Zimbabwe has over the years suffered rampant poaching, with elephants the
prime targets on account of their tusks which are used for ornaments and
medicine. About 400 elephants were killed via cyanide poisoning in Hwange
National Park between 2013 and 2015.

In September 2015, authorities in Hong Kong intercepted 51kg of ivory worth
over US$100 000 in two inbound airmail parcels from Zimbabwe. The airmail
had been declared as “decorative tiles”.

Globally, poaching and wildlife trafficking are highly lucrative
businesses, earning between US$23 billion and US$47 billion yearly. They
are jointly ranked fourth on the list of large-scale illegal trade after
drug trafficking, counterfeiting and human trafficking.