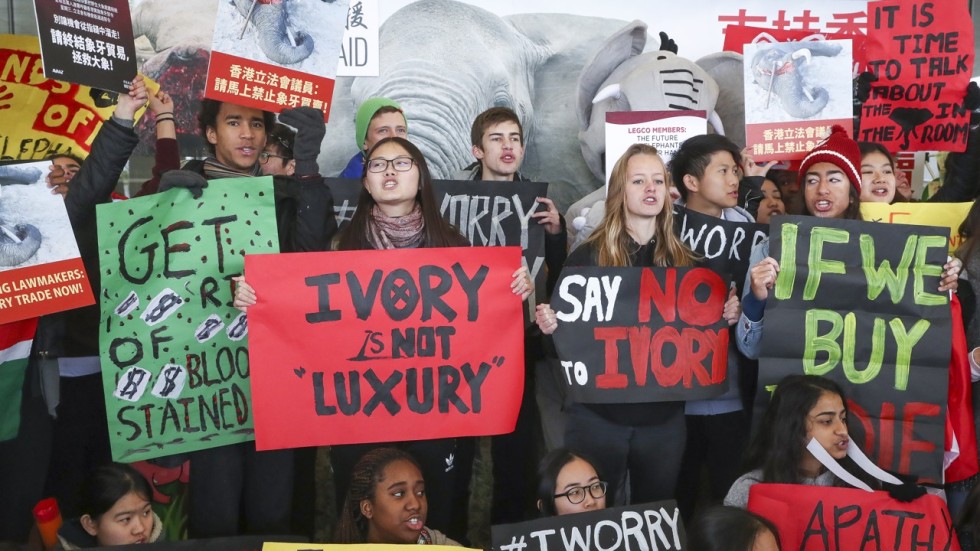 The sale of ivory will be completely banned by 2021. Photo: K. Y. Cheng

Elephant ivory will no longer be on sale legally in three years after Hong Kong’s Legislative Council on Wednesday voted overwhelmingly to approve a ban on the “cruel business”.

Legislators in the world’s largest market for elephant ivory passed the bill, 49-4, just one month after Beijing shut down markets on the mainland.

Under the law, commercial sales of elephant tusks will be phased out by 2021 under a three-step plan that received support from lawmakers across the political spectrum.

The ban was first announced by former chief executive Leung Chun-ying in 2016, which included a five-year grace period.

But a few pro-government lawmakers were against the ban, saying it threatened the livelihood of the tradesmen and craftsmen. 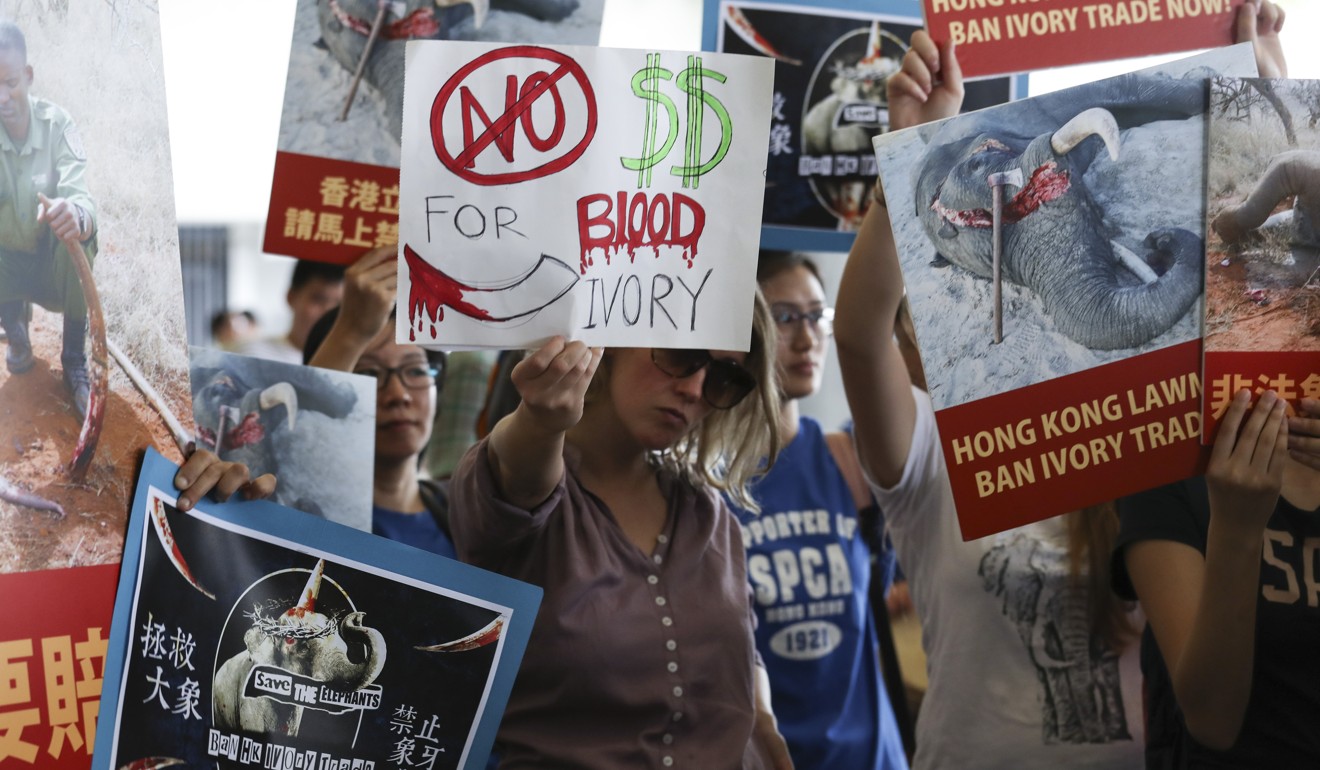 Activists from WildAid and other groups call for a ban on ivory in June last year. Photo: Nora Tam

“This ban has disregarded the interests of the industry,” said Liberal Party’s Peter Shiu Ka-fai, who represents the retail wholesale sector and was one of the four “no” votes.

Shiu expressed worries about the livelihood of the city’s 370 licensed wholesalers who hold 77 tonnes of legal ivory, as well as 100 craftsmen who were over 60 years old.

Ivory hunting is a cruel business that should be banned.
Michael Tien Puk-sun, legislator

The government should offer them compensation and career training so they could have a new way to make a living, he said.But other lawmakers from his camp, as well as pan-democrats, spoke in support of the ban and were against compensation.

“Ivory hunting is a cruel business that should be banned,” said legislator Michael Tien Puk-sun.“We need to stop the trade to curb poaching.”

Giving compensation to those in the ivory trade would cast Hong Kong in a bad light because no other government has done the same, Civic Party lawmaker and barrister Dennis Kwok said.

“The law is not aggressive enough as it provides a five-year grace period, which is quite a long time,” Kwok said, referring to when the ban was first announced under Leung. “The traders have a long time to get prepared for the prohibition.”

While it was unclear how much cash flows through Hong Kong’s elephant ivory market, international trade in illicit ivory is worth an estimated US$19 billion (HK$149 billion) – leading to the slaughter of 30,000 elephants each year, according to international reports.

The number of African elephants have declined by 111,000 in the past decade due largely to poaching, according to the WWF, the global conservation group. They could become extinct in the near future if this trend continues, experts have warned. 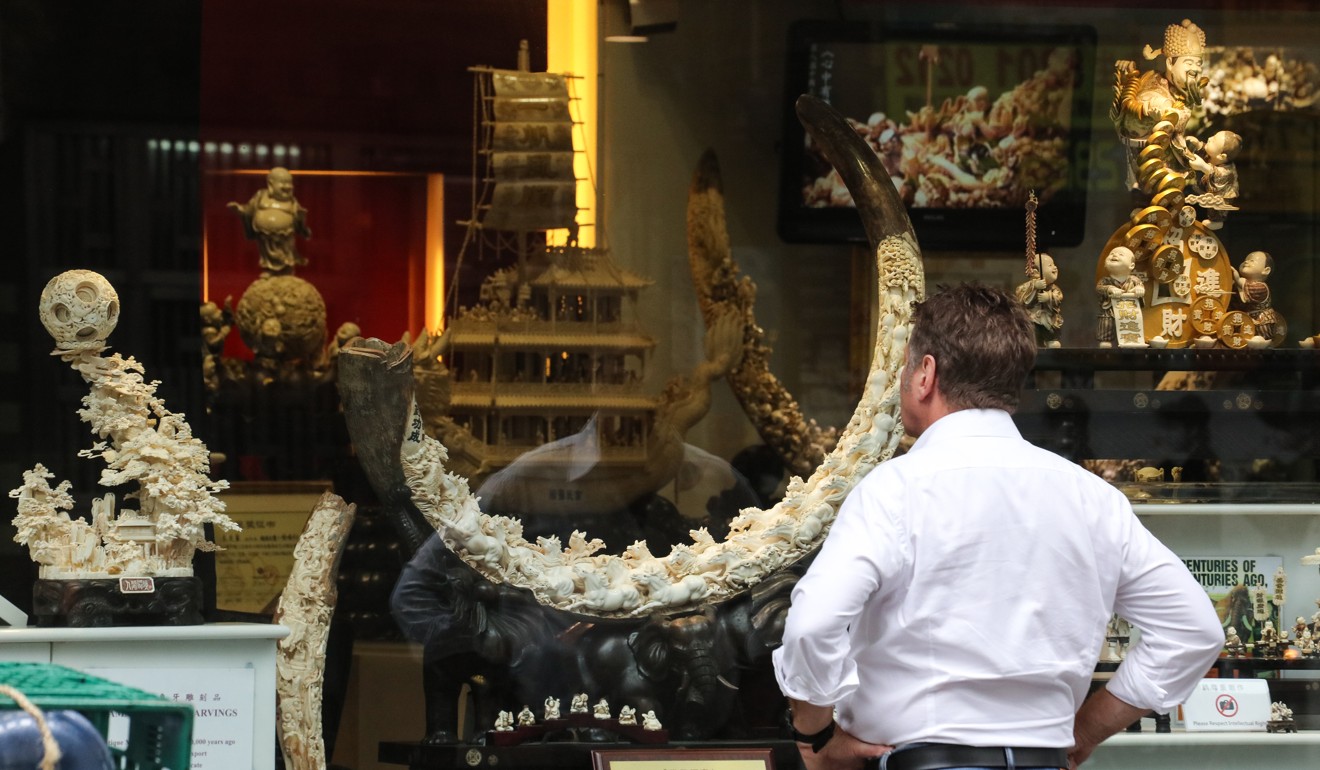 International trade in illicit ivory is worth an estimated US$19 billion. Photo: Felix Wong

International trade in ivory has been outlawed since 1989, but licensed selling of ivory imported before the ban, as well as ivory from mammoth remains and from the stockpiles of African governments, is legal.

The new law bans the trade in ­elephant hunting trophies and ivory carvings, followed by a ban on ivory acquired before a 1975 convention regulating the trade in endangered species, and finally, a total ban on all sales of ivory ­obtained before 1990, when an international ban was enacted.

Bert Wander, campaign director for Avaaz, a US-based civic organisation, described the vote as “a referendum on the future of elephants”.

Since China announced its ban, the price of ivory has collapsed from US$2,100 per kilogram in 2014 to a low of US$383 per kilogram, he said.

“But there have been fears that unless Hong Kong follows, the trade could re-establish itself in the city,” Wander added.

WWF Hong Kong said it welcomed the new legislation, as such a ban showed a clear commitment towards the future of African elephants as it called on governments across Asia to follow China and Hong Kong’s lead to close their ivory markets.