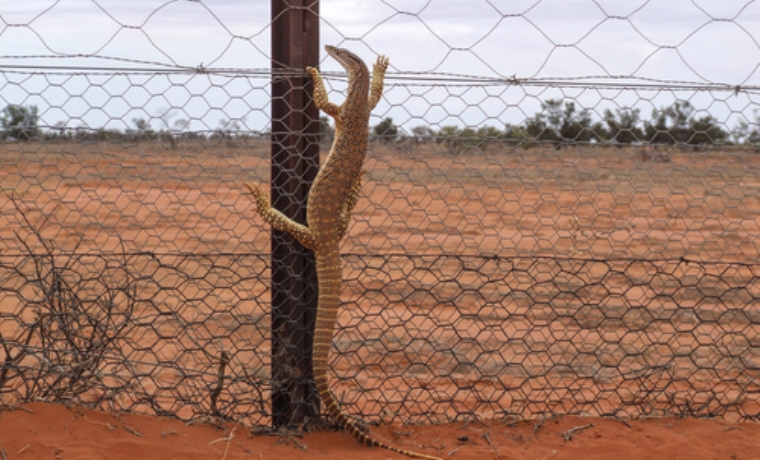 While 2016 was dominated by talk of a ‘beautiful wall’ between the US and Mexico, few think of the effect  man-made physical barriers have on animals. Adam Hart explains

Territoriality – occupying and defending space – is a trait common to many animals. Some can develop or take advantage of relatively small but clearly defined physical territory that can be defended easily. Such animals include the mound-building termites or the cavity-nesting honeybee, as well as denning mammals such as brown hyena.

Wider territory, beyond the immediate physical space of a nest or den site, may be required by animals to provide sufficient space for foraging and to find potential mates. Where this happens, species can signal ownership by communication that includes song in birds or urine spots in mammals.

Of course, we humans also own and occupy space, and the possession and defence of space is at the heart of many larger-scale human conflicts. We are good at manipulating the physical environment, and the huge advantages of occupying and defending resource-rich or strategically useful territory means that structures such as walls, ditches, hedges and fences are commonplace wherever humans make use of land. Of all the different types of barrier we erect, though, it is the fence, in all its forms, that has come to dominate globally. It is also the fence that poses the greatest threat to wildlife.

The types of fences most of us in the UK are familiar with are small in scale – certainly when compared with the world’s longest one, the 5,614km pest-exclusion fence built in Australia to keep dingoes out of South Eastern Australia and southern parts of Queensland. However, even at the level of our back garden, fences can have a powerful and negative impact on wildlife. Sometimes those issues might be immediate and obvious: I have disentangled many hedgehogs, sheep and even a slow-worm from various fences here in the UK.

In the game reserve in South Africa where the University of Gloucestershire takes an annual field course, they have disentangled far larger animals, including kudu and waterbuck.

The so-called Buffalo Fence in Botswana, which runs north to south across the Okavango Delta, prevents cape buffalo from the inner delta transmitting foot-and-mouth disease to cattle in the outer delta. Studies have shown that this veterinary fence (as such fences are called) has entrapped species including elephant, roan antelope, giraffe and buffalo, and that this entrapment usually leads to death.

However, the rare but lethal direct effect of such barriers, though unfortunate, is not the most important impact fences have on wildlife.

To understand the most significant harmful effects of fencing, we need to take a wider perspective, zooming back from the fence itself to its position in the landscape.

To do that, we can return to our back gardens and to a familiar animal, the hedgehog. Hedgehogs can roam considerable distances at night and our gardens provide ideal foraging sites for them. However, if you examine an aerial view of urban landscapes, you will see that they tend to be intensely subdivided into a mosaic of fenced plots, usually gardens. So although hedgehogs are notionally free to roam across large spaces, the presence of fences can prevent them from doing so, or at least make movement hugely inefficient (and potentially hazardous) for them.

Of course, as is the case with larger wildlife in more exotic locations, hedgehogs are remarkably adept at breaching certain types of fence, but it still makes sense to maintain gaps in their bases for the animals to pass through freely.

The subdivision of the urban landscape into a mosaic of fenced gardens is, in miniature, what is happening in many wider landscapes, including some of great conservation significance. Of particular concern is fencing within landscapes that are important for mammal migrations. In one high-profile paper[1] published earlier this year, scientists suggested that perhaps the most famous of all migrations is in danger of imminent collapse as a direct consequence of fencing.

The Greater Mara ecosystem in southwest Kenya is home to one of the largest and most biodiverse mammalian migrations on the planet, comprising at least 1.3 million wildebeest, 200,000 zebra and several hundred thousand Thomson’s gazelle. The Greater Mara ecosystem also encompasses the tribal rangelands of the Maasai people, who move their cattle, sheep and goats around the ecosystem to follow good grazing. Since the 1970s, however, changes in the way that the Maasai make use of land within the Greater Mara have led to an accelerating use of fencing, with very serious consequences for wildlife.

Land privatisation and the formalisation of previously informal land ownership across the Greater Mara led quickly to the establishment of fenced land plots. Fences act both to define ownership and to allow for easier management of the fenced land. Once you can own and manage land, it makes sense to fence what is yours – imagine the chaos if our urban landscapes were unfenced! In the Greater Mara, effects were felt as soon as fencing appeared. However, as with many wildlife issues, the situation is more nuanced than ‘fences=bad’.

In the 30 years following the formalisation of land tenure in the Greater Mara, resident wildlife populations were estimated to have declined by 70% and, while fencing was important in this decline, the period coincides with a dramatic fall in Kenyan wildlife in general.

Wildlife in Kenya is owned by the government and hunting (both for sport and meat) has been banned since the late 1970s. Private landowners can thus only benefit from wildlife if they are able to set up ecotourism businesses, which is not possible for most. As a consequence, in the many areas of Kenya unsuitable for ecotourism, wildlife has no financial value to those who own the land on which it ranges.

This is a significant, although not the only, factor in the collapse of wildlife in Kenya, both directly (wildlife is illegally killed for food and to prevent grazing competition) and indirectly (land is used for profitable activities that usually exclude wildlife).

Despite dramatic declines, important populations of wildlife remained within the ecosystem largely because, up until 2014, fenced plots in open savannah lands were limited. Most fenced plots were found around the edges of the ecosystem and their impact on migratory wildlife was limited. In 2014, however, this changed. Fences began to proliferate, with ‘expansion fronts’ pushing to open savannah and land then being subdivided by ‘fill-in’ fences behind these fronts.

The resulting loss of connected open savannah in the north of the ecosystem is already affecting the Loita Plains migration, with the risk of wildebeest becoming completely excluded.

The Serengeti migration route uses the Maasai Mara National Reserve and the Mara North conservancy areas in the south of the ecosystem. Currently, there are policies in place to prevent the spread of fencing there, but even without fencing regulations, the planned road (another type of barrier for wildlife) across the northern part of the Serengeti National Park may be equally, or more, disruptive.

Simple border fences, such as those being constructed in parts of Eurasia in response to the refugee crisis, are also causing problems, affecting species with large home ranges that straddle borders. Border fences can act as complete barriers to larger species such as wolves, brown bear and Eurasian lynx, and these are already under threat from fencing projects in Slovenia and Croatia.

However, sometimes border fences can be beneficial. Asiatic wild ass living in border areas between China and Mongolia cannot enter Inner Mongolia because of a 4,700km border fence. This fence actually protects them from unregulated, and unsustainable, hunting that is threatening populations restricted to Inner Mongolia.

Fencing is one of the most controversial topics in modern conservation and it poses one of the biggest threats to some important wildlife populations. However, smaller-scale fencing is absolutely essential for wildlife management in most parts of the world.

Fences contain and protect wildlife in reserves, helping to limit poaching and allowing for effective and efficient management. Fences also enable people to make better use of land, and to own wealth and become more prosperous. Only if we make efforts to understand the needs of people and wildlife together, and only if we take steps to understand the landscape-scale ecology of species with large ranges or those that migrate, will we be able to reduce the negative impacts of fences.

If we are realistic, though, the costs imposed on wildlife by large-scale fences are unlikely to disappear in the short term, and the current political momentum towards increased fragmentation and border controls is likely to have implications that go far beyond any localised effects on us.