The Guardian has been given exclusive footage which shows the capture of young, wild elephants in Zimbabwe in preparation, it is believed, for their legal sale to Chinese zoos.

In the early morning of 8 August, five elephants were caught in Hwange national park by officials at Zimbabwe Parks and Wildlife Management Authority (Zimparks).

These captures are usually kept as secret as possible. The Guardian understands that in this case the usual procedure was followed. First, a viable herd is identified. Then operatives in a helicopter pick off the younger elephants with a sedative fired from a rifle. As the elephant collapses, the pilot dive-bombs the immediate vicinity so the rest of the herd, attempting to come to the aid of the fallen animal, are kept at bay. When things quieten down, a ground-team approaches the sedated elephants on foot, bundles them up, and drags them on to trailers.

The footage, a series of isolated clips and photographs provided to the Guardian by an anonymous source associated with the operation, documents the moment that operatives are running into the bush, then shows them tying up one young elephant. The elephants are then seen herded together in a holding pen near the main tourist camp in Hwange. 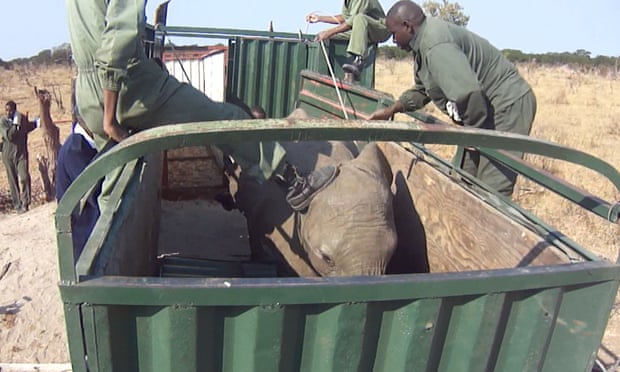 Finally, in the most disturbing part of the footage, a small female elephant, likely around five years old, is seen standing in the trailer. Her body is tightly tied to the vehicle by two ropes. Only minutes after being taken from the wild, the animal, still groggy from the sedative, is unable to understand that the officials want her to back into the truck, so they smack her on her body, twist her trunk, pull her by her tail and repeatedly kick her in the head with their boots.

Altogether, 14 elephants were captured during this time period, according to the source, who asked to remain to anonymous for fear of reprisal. The intention was to take more elephants, but the helicopter crashed during one of the operations. It is estimated that 30-40 elephants were to be captured in total.

The elephants that were taken are now in holding pens at an off-limits facility within Hwange called Umtshibi, according to the source. One expert who reviewed the photographs, Joyce Poole, an expert on elephant behaviour and co-director of the Kenya-based organisation ElephantVoices, said the elephants were “bunching” – huddling together because they are frightened.

Audrey Delsink, an elephant behavioural ecologist and executive director for Executive Director for Humane Society International Africa, also reviewed the photos and footage. She believed that most of the elephants were aged between two and four. “Basically, these calves have just been weaned or are a year or two into the weaning process.” In the wild, elephants are completely dependent on their mother’s milk until they are two, and are not fully weaned until the age of five.

A number of the calves, she said, were displaying temporal streaming – a stress-induced activity. “Many of the gestures indicate apprehensive and displacement behaviour – trunk twisting, trunk curled under, face touching, foot swinging, head-shaking, ear-cocking, displacement feeding, amongst others.” Zimparks were approached but did not make a comment.

The buyer for the young elephants is a Chinese national, according to inside sources who asked not to be named. Last year he was associated with a case involving 11 wild hyenas, who were discovered in a truck at Harare international airport that had been on the road for 24 hours without food or water and were reportedly in an extremely stressed condition, dehydrated and emaciated and, in some cases, badly injured.

The capture of the baby elephants is just one of a number of operations that have taken place in Zimbabwe and across the continent over several decades. Nine elephants were reportedly exported from Namibia to Mexico in 2012, six from Namibia to Cuba in 2013, and more than 25 from Zimbabwe to China in 2015. In 2016, the US imported 17 elephants from Swaziland despite objections from the public and conservationists. From 1995-2015, more than 600 wild African elephants and 400 wild Asian elephants are reported to have been traded globally, according to a database kept by the Convention on International Trade in Endangered Species (Cites).

Under Cites, trading live elephants is legal, with a few stipulations. The destination must be “appropriate and acceptable”, and the sale must benefit conservation in the home country. But elephant conservationists and animal welfare advocates point out a number of flaws in the system. “There are no criteria setting out what “appropriate and acceptable” means and what is really contributing to conservation,” explained Daniela Freyer of Pro-Wildlife, a German-based organisation that seeks to improve international legislation protecting wildlife. “Currently, it is entirely up to authorities in the importing countries to define and decide. There are no common rules and no monitoring of the conditions of the capture, the number of animals being traded, where they will end up or the conditions in which they will be kept at their destination.” There is also no monitoring of the requirement that a sale benefit conservation. 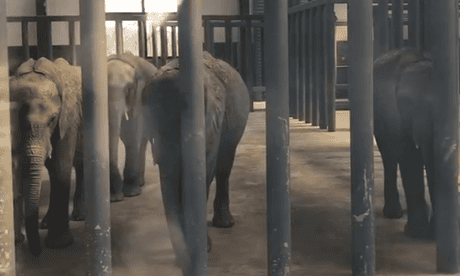 For example, Zimbabwe and China are the biggest players in the live elephant trade, but Iris Ho, wildlife programme manager at Humane Society International (HSI), says they have found little information from the importing countries on the animals’ arrival. “We don’t know how many facilities in China have received the elephants imported from Zimbabwe during the last few years. We don’t know the status of these animals.”

Attempts to comply with the few Cites stipulations such as “appropriate and acceptable destinations” are sometimes dismissed. In 2016, a Zimbabwe delegation of Zimparks and ZNSPCA inspectors travelled to China to access the facilities, where they found that most of the zoos “showed signs of poor treatment of the animals”. But their recommendation that a shipment of 36 elephants “remain in Zimbabwe until the holding facilities in China were completed and assessed for compliance by Zimbabwe”, was ignored.

On September 16 Chinese papers announced in cheery headlines that three elephants – two females and a male, aged approximately four years old – had arrived at the Lehe Ledu wildlife zoo. Photographs of the elephants from Chinese media were analysed by Poole, who noted that the face one of the females looked pinched and stressed. The elephant appears to have begun to wear her tusks down on the bars, rubbing back and forth in frustration. Poole added that the sunken look, dark eyes and mottled skin are common for young, captured elephants. “In the wild, you only see the pinched, sunken look in sick or orphaned elephants.”

The zoo has said that it is providing more than 1,000 square metres of indoor space and 3,000 sq metres outdoors. The animals have six full-time “babysitters” and every meal is prepared carefully, based on scientific recommendation.

Finally, questions have been asked about whether Zimbabwe is complying with the Cites stipulation that the sale of the elephants must benefit their conservation in the wild. The environment minister, Oppah Muchinguri-Kashiri, was reported in the Guardian last year as saying the sale of the elephants was necessary to raise funds to take care of national parks in Zimbabwe, which have been ravaged by drought and poaching. But in the past, there have been unconfirmed reports of Grace Mugabe, the president’s wife, using funds from the sales of elephants to pay off a military debt to the Democratic Republic of the Congo.

The international body governing the trade, Cites, is increasingly coming under fire for its role. “The scientific literature states that captive facilities continue to fall far short of meeting elephants’ natural needs for movement, space and extended social networks, with negative effects on health, behavior and reproduction,” said Anna Mulà, a legal adviser on animal law at Fondation Franz Weber, an organisation that is lobbying Cites to end the trade of live elephants.

A spokesman for CITES said: “The triennial CITES conference held last year (CoP17) agreed that ‘appropriate and acceptable destinations’ was defined as destinations where the importing State is satisfied that the recipient of the live animals is suitably equipped to house and care for them. CoP17 also agreed on a process to assess if additional guidance on this matter is required. Further, both the importing and exporting countries are now required to be satisfied that any trade in live elephants should promote the conservation of elephants in the wild. In addition, the exporting Party must also be satisfied that animals are prepared and shipped so as to minimize the risk of injury, damage to health or cruel treatment of live elephants in trade… CITES does not address the way in which the animals are captured or stored prior to export.”

But for now, China continues to import the vulnerable elephants at almost conveyor-belt speed. According to Ho, some pressure to stop the practice is beginning to be felt, but the country is “influenced by the view that breeding is conservation. And then, of course, there is a willing partner in Zimbabwe – and the thrill of seeing African elephants by the visitors.”

It’s a win-win, she said, for those who are financially profiting from the legal trade in the calves. “But it’s a lose-lose for the animals, both imported and left behind.” 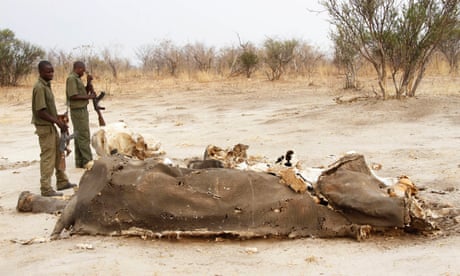 The elephants, including a mother and young calf, were killed in the Hwange national park
Read more
Topics