A son of Cecil the lion has been killed by trophy hunters in Zimbabwe, meeting the same fate as his father whose death in 2015 caused a global outcry.

Xanda was six years old and had fathered a number of cubs himself. He was shot on 7 July just outside the Hwange national park, not far from where Cecil died, but news of the death only became public on Thursday.

The trophy hunt was organised by Zimbabwean private hunter Richard Cooke but his clients, who may have paid tens of thousands of dollars, have not been revealed. Xanda was wearing a GPS tracking collar, fitted by scientists led by Andrew Loveridge at Oxford University, who have studied the Hwange lions for many years.

“Xanda was one of these gorgeous Kalahari lions, with a big mane, big body, beautiful condition – a very, very lovely animal,” Loveridge told the Guardian. “Personally, I think it is sad that anyone wants to shoot a lion, but there are people who will pay money to do that.” 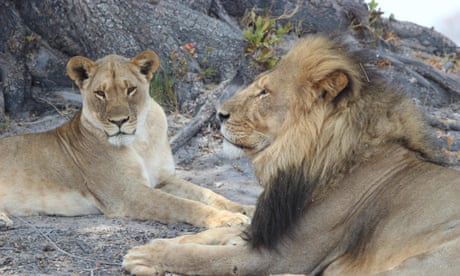 “I put the collar on Xanda last October and spent a bit of time following him around,” he said. “You have handled them so you feel a personal engagement with the animal.” But Loveridge does not condemn trophy hunting outright: “Trophy hunting protects an area about the size of France and Spain combined in Africa. So if you throw trophy hunting out, what happens to all that habitat?”

Xanda was the pride male in a group with two adult lionesses and cubs which roamed near the boundary of the national park. “He was shot 2km from the park boundary, which is a hop and a skip for a lion,” Loveridge said.

The scientists want a 5km no-hunting zone around the park. “It is something we have suggested for years,” he said. “But there is a lot of resistance because a lot of the hunting happens right on the boundary, because that is where the animals are. The photo-tourism operators in Hwange are very keen to have that discussion. They are annoyed that this has happened.”

Xanda’s death poses no immediate danger to the 550-strong lion population in Hwange national park, which spreads over 15,000 sq km, Loveridge said: “The lion population is pretty healthy, but it would probably be better if it didn’t happen,” said Loveridge.

The scientist said Cooke is a responsible operator and had a legal quota for the hunt: “He is very ethical, he doesn’t cut corners. He has always communicated with us when he has hunted an animal, and given us the collar back. He is not one of the fly-by-night guys.” Cooke has killed several collared lions in the past, Loveridge said. Cooke did not respond to requests for comment.

“I’ve had a look at the GPS collar data and it all seems to be as [Cooke] says,” Loveridge said. “The collar goes to a hunting camp and this is when you know the animal has been shot.”

The death of Cecil the lion in 2015, killed by US dentist Walter Palmer, led to widespread criticism of the trophy hunting of lions, which has become a big business with the number killed tripling to 1,500 a year in the last decade. Lions have lost 90% of their overall population in the last century and only about 20,000 remain.

Philip Mansbridge, UK director of the International Fund for Animal Welfare, said: “IFAW opposes the cruel and needless killing of wild animals for recreation and encourages enjoyment and appreciation of these magnificent animals within their natural habitats through sustainable ecotourism opportunities. This has proven to be more beneficial for communities living with wildlife.”

“The unprecedented global outcry after Cecil the lion was killed just goes to show the vast majority oppose the actions of the minority that enjoy slaughtering these animals for trophies,” he said. “These animals deserve our protection, not bullets.”

Masha Kalinina at the Humane Society International said: “Trophy hunters have learned nothing. To stop lions slipping into extinction, it is critical that countries like Zimbabwe focus on keeping as many lions alive as possible. It could follow the examples of Botswana and Kenya, which ban trophy hunting.”

Prof David Macdonald, another of the Oxford team, told the Guardian in December that strictly regulated and sustainable hunting could provide valuable funds to protect lion habitats.

“Of course I understand if people say there are simply no circumstances under which [trophy hunting] will be acceptable to me,” he said. “If so, then they have to look for a mechanism of replacing it with something that is acceptable. That might be people putting their money where their mouth is, buying out the hunting interest and replacing it with some sort of international payment for conservation.”

Cecil, who was 13 when killed, was believed to have had 13 surviving sons and daughters and 15 known grandcubs as of June 2016.