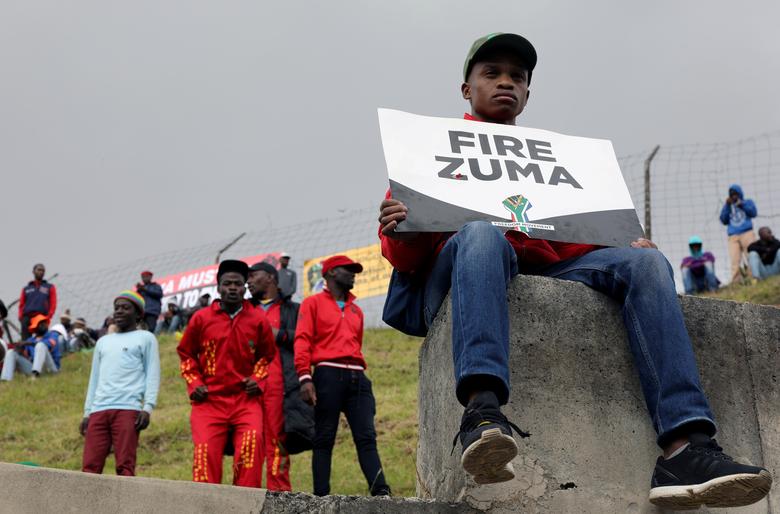 JOHANNESBURG South African President Jacob Zuma may be removed as head of state after a December conference when a new leader of the ruling African National Congress will be chosen, Secretary General Gwede Mantashe said on Wednesday.

Zuma has survived calls to resign from sections of the ANC in recent months following a string of corruption scandals, waning public support and economic instability caused by a heavily-criticised cabinet reshuffle in March.

Though Zuma can remain South African president until an election in 2019, senior ANC sources opposed to him have told Reuters they will push for his removal as head of state shortly after he steps down as party leader in December.

ANC’s top leadership, including Mantashe, have been critical of some of Zuma’s decisions but have not publicly said they back proposals to remove him.

Asked if it would be easier for Zuma’s ANC opponents to remove him after the party conference, Mantashe told Reuters: “Yes, that’s exactly the point I’m making. After December … he will not be the president of the ANC, who by resolution should be president of the republic. It’s less complex.”

Mantashe gave as an example former president Thabo Mbeki who was recalled as head of state by the ANC in 2008, less than a year after he was ousted as party leader.

Zuma is unpopular with most investors and the possibility of him leaving office before 2019 would be welcomed by markets.

Backroom rifts within the ANC have been thrust into the open this week after more than 100,000 emails leaked to local media allegedly showed improper dealings in lucrative government contracts by business friends of Zuma.

Zuma and the Gupta family, wealthy Indian-born businessmen whose companies have contracts with state-owned firms, have not commented, though they have denied similar allegations in the past. Reuters could not independently verify the new allegations.

Mantashe said the allegations were damaging the reputation of the ANC and called for a judicial inquiry to investigate the influence of business interests in government. Zuma has not yet agreed to such an investigation.

“It damages the ANC because we are the governing party. Many of the people cited there as beneficiaries of the Guptas are leaders of the ANC, so we’re paying the price for that,” Mantashe said.

The latest allegations of influence-peddling are deepening divides in the ANC as factions battle for control ahead of the December party conference.

Zuma has backed his ex-wife and former African Union chair Nkosazana Dlamini-Zuma to succeed him, while other ANC factions are supporting Deputy President Cyril Ramaphosa.

Opposition parties have made upbeat comments about unseating the ANC in 2019, an unthinkable scenario a few years ago for a party that has led comfortably since it swept to power under Nelson Mandela at the end of white-minority rule in 1994.

The ANC lost control of major cities last year in its worst local election results since coming to power, partly due to a drop in public support for Zuma.

“When we go to the 2019 elections we will have a new face of the ANC. It doesn’t matter whether he (Zuma) leaves after December or doesn’t leave,” Mantashe said.