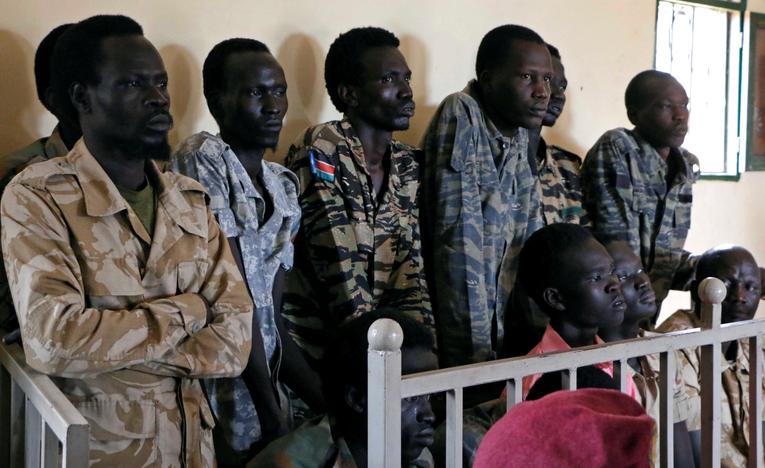 JUBA Thirteen South Sudanese soldiers accused of raping five foreign aid workers and killing their local colleague appeared before a military court on Tuesday, a case seen as a test of the government’s ability to try war crimes.

The attack, one of the worst on aid workers in South Sudan’s civil war, occurred on July 11, 2016 as President Salva Kiir’s troops won a three-day battle in Juba over opposition forces loyal to ex-Vice President Riek Machar.

Witnesses told Reuters that armed men attacked the Terrain Hotel in the capital Juba for several hours. Victims phoned U.N. peacekeepers stationed a mile away and begged for help, but none came, the witnesses said. The military head of the U.N. peacekeeping mission was fired over the incident.

U.N. investigators and rights group have frequently accused both the army and rebels in South Sudan of murder, torture and rape since the civil war began in 2013, and say the crimes almost always go unpunished.

Describing the incident, the manager of the Terrain Hotel, Mike Woodward, told the court that “between 50 and 100” soldiers arrived in the hotel in the afternoon of July 11 and began looting an hour later.

“Five women working with humanitarian organisations were then raped. John Gatluak was shot at 6:15 p.m.,” Woodward said. An American was also shot in the leg, he said.

Peter Malual Deng, the defendants’ lawyer, dismissed the charges, saying evidence cited by Woodward was not sufficient to prove the allegations. “What I know the area was under operation at the time and rebels were controlling the area,” Deng said.

He said photographs provided by the hotel were inadequate evidence and called for more witnesses to come forward.

Chief prosecutor Abukuk Mohammed Ramadan said they were expecting some of the survivors of the attack to return to the country and testify. “Some of the victims left South Sudan especially the ones who were raped,” he said. “They went back to their countries and we are expecting them back.”

The case was adjourned until June 6.

The killers face a minimum of 10 years in jail with a fine paid to the victim’s family, or a maximum of the death penalty. Rapists face up to 14 years.

The three-year conflict has fractured South Sudan along ethnic lines – Kiir is an ethnic Dinka, Machar is a Nuer – and displaced a quarter of the 12 million population.