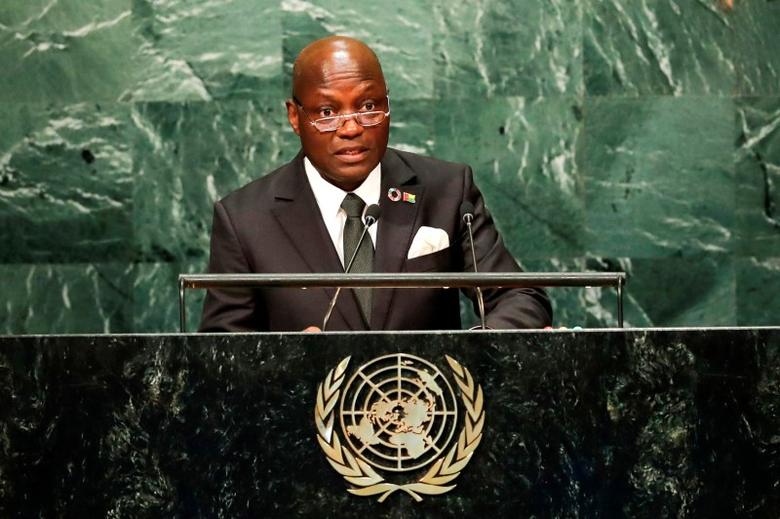 BISSAU Hundreds of people marched through the capital of Guinea Bissau on Thursday demanding the departure of President Jose Mario Vaz, a day after parliament rejected a programme submitted by his prime minister.

Vaz appointed Prime Minister Umaro Mokhtar Sissoco Embalo in November after months of regional talks seeking an end to an 18-month political crisis that has paralysed the institutions of the poor West African nation and stoked fears that drug traffickers might profit from the power vacuum.

However, according to the constitution, the prime minister has already missed a 60-day deadline to present a government programme and budget that have to be accepted by parliament.

“The party … voted against the programme of the PM because his government is illegitimate,” said Seidy Ba Sane, a spokesman for the country’s ruling PAIGC party.

Protests are relatively rare in the former Portuguese colony where instability has typically taken the form of military coups, led by officers drawn mostly from a narrow military elite drawn from an ageing batch of soldiers who fought for independence in 1963-1974.

The crowd on the main avenues of the capital Bissau repeatedly chanted “Jomav get out”, using the president’s local nickname, and called for fresh elections.

Sissoco told reporters his party would continue ruling without the confidence of parliament.

Residents say the failure to pass a budget has begun to affect their daily lives and that salaries for civil servants were 10 days late in January.

The United Nations, whose peacekeeping mandate in Guinea Bissau is up for renewal this week at the Security Council, expressed concern this month “over challenges posed by transnational organised crime and emerging threats, including drug trafficking, in the country”.

The country’s network of islands and riverways have in the past been used as a transit point for cocaine from South America to Europe.

Guinea Bissau is one of the world’s poorest countries and its economy is heavily reliant on cashew nut production.