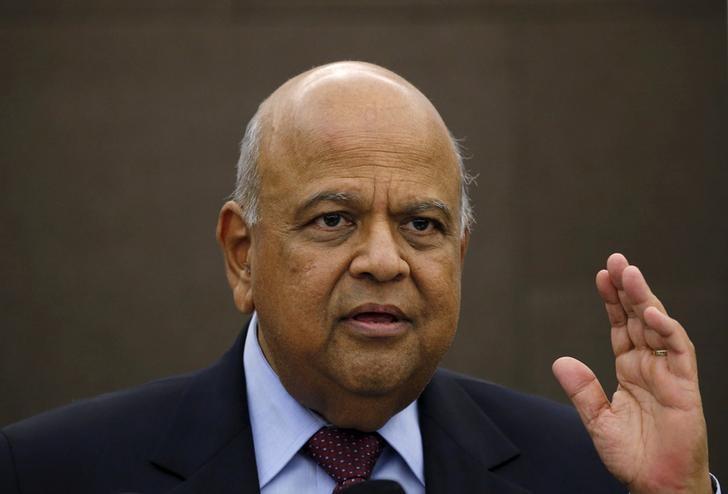 South African finance minister Pravin Gordhan dismissed as “frivolous” fraud charges laid against him which have shaken financial markets, saying on Friday he would stay at his post and deliver an interim budget at the end of this month.

In a gesture of defiance, Gordhan refused to request a review of the decision to bring the charges, saying he had no confidence in prosecutors’ ability to give him a fair hearing.

The charges, laid this week, have raised suspicions of a political plot to oust Gordhan, who remains respected on financial markets and has defied friends and allies of President Jacob Zuma over the awarding of lucrative state contracts, political analysts say.

Investors have been worried that Gordhan could be removed from his job over the charges, stymieing efforts to revive economic growth and raising the risk that credit rating agencies would downgrade South Africa to “junk” status.

But speaking via video link to a Thomson Reuters investment conference in Cape Town, Gordhan said: “I’m here to stay,” adding that the economy was bottoming out and had every chance of growing by more than one percent next year.

“I want to say that the charges that were brought against me don’t constitute fraud. The charges are frivolous,” he said in a combative performance from the capital, Pretoria.

The rand rallied on his comments to 14.0875 to the dollar, up more than 1.1 percent from the close on Thursday. Stocks also rose.

South Africa’s currency plunged nearly 4 percent on Tuesday, when prosecutors ordered Gordhan to appear in court on Nov. 2 to answer charges that he cost the tax department 1.1 million rand ($79,000) by approving early retirement for a deputy commissioner in 2010 and re-hiring him as a consultant.

Previously finance minister from 2009 to 2014, Gordhan was recalled to the post to stem a selloff in South African assets after Zuma briefly replaced finance minister Nhlanhla Nene with an unknown politician in December.

While a favourite with investors for his stewardship of the economy, Gordhan proclaimed his political credentials by evoking his many years in the African National Congress (ANC) underground alongside anti-apartheid giants such as Nelson Mandela and Walter Sisulu.

Gordhan listed a series of ANC figures in the fight to end white minority rule whose idealism and moral rectitude stands out at a time of public weariness with the current generation of South African leaders.

“We’re not just bureaucrats or politicians,” he said. “We are activists of the Congress movement, a movement of Mandela, Sisulu, Kathrada, Slovo, Billy Nair and many others.

“It’s this kind of political lineage that gives one a sense for what is right and just … to do the right thing, stand by the right thing and fight the wrong thing,” he added.

This year, the Constitutional Court told President Zuma to repay more than $500,000 for “security upgrades” to his private home that included a swimming pool.

Zuma is also fighting in the courts to keep at bay 783 corruption charges set aside on the eve of his election in 2009. The High Court ruled in April that decision was irrational.

Public prosecutor Thuli Madonsela had been expected to publish a report on Friday into allegations of political interference by wealthy friends of Zuma.

But Zuma filed a court application on Thursday to block the release, and Madonsela told reporters she had submitted the report to parliament for safekeeping pending the case.

Under the summons served on Gordhan, he has to acknowledge the charges against him at a court hearing but not enter a plea.

State prosecutor Shaun Abrahams has said Gordhan could ask him to review the decision to lay the charges.

But Gordhan dismissed such a possibility, saying through his lawyers that this would be pointless and criticising the National Director of Public Prosecutions (NDPP).

“The main reason for his decision is that he does not have any confidence in the NDPP’s ability or willingness to afford him a fair hearing,” the lawyers said in a statement.

Despite the charges, Zuma has continued to express his support for Gordhan.

The ANC’s Youth and Women’s League and some provincial leaders remain staunch Zuma loyalists but since August, when the party suffered its worst local elections since 1994, more and more voices have come out in opposition.

This week, ANC Premier David Makhura of Gauteng, the province that includes Pretoria and Johannesburg and accounts for a third of South African output, delivered an unprecedented swipe at the “recklessness” of Zuma’s administration.

“It undermines every little effort that South Africa is making to move forward,” Makhura said, also speaking at the Thomson Reuters event. He, too, described the charges against Gordhan as “frivolous”.

Caught in the eye of the worst political storm since the end of apartheid two decades ago, the 67-year-old Gordhan has remained unflappable and resolute.

“My spine is still very straight,” he joked when asked at Friday’s conference about how he was holding up under the twin burden of formal criminal proceedings and managing South Africa’s struggling public finances.

Ever since the end of apartheid in 1994, South African politics and society have been messy as the country of 53 million has tried to bridge the yawning income and racial divides left by decades of formalised white-minority rule.

Konrad Reuss, regional head of ratings agency Standard & Poors, made clear the turbulence was worrying and a distraction.

“This is not about political noise,” Reuss said. “We have political turmoil, political tension that can undermine structural reforms.”

However, others see the duelling as a sign of South Africa’s still-young democracy finding its feet by laying down the limits of executive authority, be it through the courts, the markets or the media.

“Obviously South Africa since December has been something of a roller-coaster,” said Colin Coleman, Africa head of U.S. investment bank Goldman Sachs. “But this year has been a very good demonstration of the strength of all our institutions.”