I have added comments in square brackets to indicate gaps or one-sided information presented in this report.

European commissions’ opposition to a proposed global ban will spell the beginning of a mass extinction of African elephants, warn officials from 29 African states 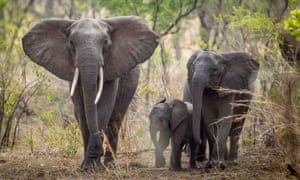 Elephants are being killed by poachers at a rate of one every 15 minutes in Africa. Photograph: Morgan Trimble/AP
Arthur Neslen

Wildlife officials in nearly 30 African states say they are appalled by an EU decision to oppose a comprehensive global ban on the ivory trade.

In a position paper released on 1 July, the European commission said that rather than an all-encompassing ban it would be better to encourage countries with growing elephant numbers to “sustainably manage” their populations.

An existing global embargo on ivory sales is due to end in 2017 and Zimbabwe, Namibia, South Africa and Botswana are pushing for it to be replaced with a decision-making mechanism for future tusk trading, at the Convention on International Trade in International Species (Cites) conference in Johannesburg this September.

However, the African Elephant Coalition (AEC) – a coalition of 29 African states – is warning of a mass extinction on the continent within 25 years, unless elephants are given an ‘Annex I’ Cites listing, which would ban any future domestic ivory trade.

Andrew Seguya, the director of Uganda’s Wildlife Authority, told the Guardian: “If the EU prevents an Annex I listing, it will be the beginning of the extinction of the African elephant for sure. We have lost 100,000 elephants in just three years. If nothing is done, we will see a tipping of the balance in conservation efforts before the next Cites COP (conference of parties).”[KS: These elephants have been lost almost entirely in countries whose elephants are already listed in Annex one – where despite the ban, corruption and the penetration of Chinese economic interests and Asian illegal trading syndicates have ensured the continued slaughter of elephants for ivory. The ban has been and is still ineffective as it fails to deal with the issues of corruption, human-elephant conflict and thje need for forms of sustainable development to get the support of local people for conservation.]

In 2014, 20,000 African elephants were killed by poachers. Between 2009 and 2015, Tanzania and Mozambique lost over half their elephant populations, with similar figures reported across east and central Africa.[KS: these are both states listed on Annex 1 – this listing and the ban has done nothing to save the elephants there. The ban is a crude and very blunt instrument that has failed to end the illegal trade or conserve elephants.]

The death rate is such that every 15 minutes, an elephant somewhere is killed by poachers.

Experts say that traumatised elephant populations in Africa are increasingly becoming nocturnal and migrating in mega-herds of up to 550 in a bid to avoid contact with poachers.

Azizou El Hadj Issa, a former minister in Benin and president of the AEC’s council of elders said: “The situation is alarming in most of our countries. Elephants are slaughtered every day, rangers are being killed and the trade is fuelling terrorism which destabilises the continent and has huge repercussions for EU security. We need the EU to support us and become part of the solution to this crisis.”

With 28 members, the EU makes up the biggest voting bloc at Cites. Its funding and trade levers give it a powerful influence in the developing world.

Europe says that it wants an extension of the current ivory ban but also backs a system of exemptions included in the ban, which allows exports of some elephant products from the four African states.

Under a ‘Annex I’ listing, all international ivory trade would be outlawed.

An EU official said: “We need a balanced position. We admit that the domestic trade in ivory should be banned in those situations where it can facilitate illegal trade but don’t fully agree with the inclusion of the African elephant in ‘Annex I’ in those four countries. We would encourage the African countries to have a dialogue about this.”

However, experts believe that there is currently no way to prevent poached ivory from entering legal chains and then finding a way on to the world market.

A one-off legal sale of ivory in 2007, when the current ban came into force, was followed by “an abrupt, significant, permanent, robust and geographically widespread increase” in elephant poaching, according to researchers.[KS: these researchers are one passionately committed to a ban and they use false and unconvincing arguments and no causal evidence to make the link]

Patricia Awori a member of the AEC’s secretariat, said that she was left “flabbergasted” by the EU’s positioning. “When you consider that there were 600,000 elephants at the start of the crisis which led to this Appendix I proposal and there are now less than 400,000, I am at a loss to understand why this is not more troubling for the EU.” [KS: These figures are highly contentious – there are between 450,000 and 600,000 elephants remaining according to the African Elephant Database. Elephant numbers are increasing steadily in Botswana, Namibia and South Africa but under threat in Tanzania, Mozam,bique and much of Central and West Africa because of corruption, the operation of Asian smuggling syndicates and totally inadequate conservation funding and policies.]

Patrick Omondi, the deputy director of the Kenya wildlife service, added he was “taken aback and disappointed” by the stance from Brussels.

The most recent figures show a 61% decline in African elephants between 1980 and 2013, although an updated census is due before the Cites meeting. [KS: A decline in East, Central and West Africa but steady increases in southern Africa, where elephants are on ANNEX ii].

To ratchet down rampant poaching, the AEC wants all elephants on the continent to be considered a single species – without exceptions for the four countries – arguing that they are a threatened migratory species.[KS:  The AEC represents states that favour a ban, all of which are experiencing reductions in elephant numbers, massive corrupotion and the penetration of Asian smuggling syndicates. The successful southern African states are not part of AEC, something this article omits to mention.]

“An elephant that wakes up in the morning in Angola as ‘Appendix I’ could be in Namibia under ‘Appendix II’ by the same afternoon,” Seguya said.[KS: And in Namibia it would he far safer than in Angola or, for that matter, in Uganda or Central Africa. Uganda remains a major transit point for Central African ivory being smuggled to China. AEC hypocrisy is staggering.]

Europe is agnostic on the proposal for a decision-making mechanism to allow future ivory sales. More internal discussions are planned before the bloc takes a final position on the Cites debates, in early September.