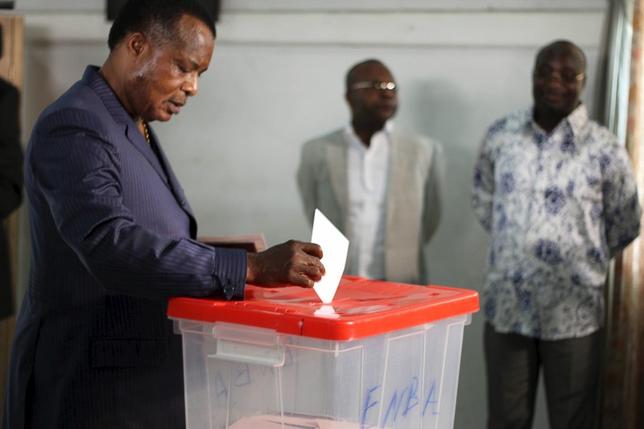 Congo Republic President Denis Sassou Nguesso will seek to extend his long years of rule in polls on Sunday, falling back on his stranglehold over national institutions and his image as a stabilising force to fend off festering discontent.

His re-election, which analysts say is all but assured, would mark a setback for efforts to foster democratic transition in African countries with long-ruling leaders.

Sassou Nguesso pushed through changes to the constitution in a referendum last September, altering the term and age limits that would have barred the 72-year-old from standing for another five-year mandate.

Having ruled the oil-producing nation from 1979 to 1992, when he lost an election, Sassou Nguesso regained power in 1997 after a brief civil war and then went on to win disputed elections in 2002 and 2009.

His supporters credit him with restoring stability and developing the country’s infrastructure.

“He has brought us peace,” said Claire Epany, a street vendor in northern Brazzaville’s Ouenze neighbourhood, where many pedestrians wore hats and T-shirts emblazoned with the president’s face. “If he leaves, who will finish his work?”

Critics, however, say Congo’s oil wealth has enriched a small elite. Around half of the population of 4.5 million lives in poverty.

Eight opponents are running in the first round, including General Jean-Marie Mokoko, a popular military man who once served as security adviser to Sassou Nguesso. Each has promised to support the opposition candidate who advances to a run-off.

Yet even some of the president’s fiercest critics think this is unlikely to overcome obstacles including an electoral commission they claim is packed with his loyalists.

“The president is going to use the machinery of the state to cheat,” said Joe Washington, president of the Ebina Foundation, an activist group in Brazzaville. “The result of the election is already known.”

In a bellwether for Sunday’s vote, September’s referendum passed with more than 92 percent support and 72 percent turnout, according to the electoral commission, in spite of an opposition boycott.

Former colonial power France criticised the conditions of the vote, saying they did not allow an accurate assessment of the result. And the European Union has decided not to send a mission to observe Sunday’s vote.

None of this bodes well for recent grassroots efforts across Africa to pressure long-ruling leaders to respect constitutional term limits and step down.

Activists have chalked up successes in Burkina Faso and Benin, and the United States and France have denounced the presidents of Burundi and Rwanda for altering their national charters.

A Sassou Nguesso victory is no guarantee of stability.

Security forces killed at least 18 demonstrators ahead of the referendum, and in southern Brazzaville’s Bacongo neighbourhood, the epicentre of the protests, some said they were prepared to take to the streets again if he wins.

(The story was refiled to correct date)