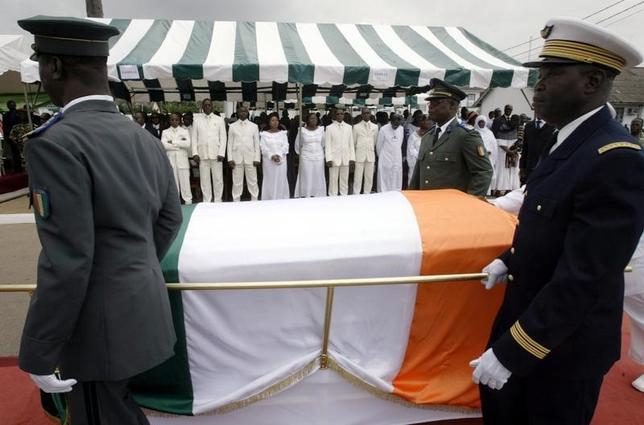 Pallbearers from the Ivory Coast military carry the coffin of Robert Guei, former president and army general, during a funeral ceremony held at the Ivorian Army Chief of Staff headquarters in Abidjan August 18, 2006.
REUTERS/THIERRY GOUEGNON

A military tribunal in Ivory Coast began hearing testimony on Tuesday in the trial of nearly two dozen soldiers charged with the 2002 murder of a former junta leader turned president, Robert Guei.

Ivory Coast, the current economic powerhouse of Francophone West Africa, has been attempting a reconciliation process after more than a decade of political turmoil in the formerly peaceful West African nation.

Guei was a retired army general when he was named head of state after a coup d’etat in 1999 that marked the beginning of the crisis.

He lost an election to Laurent Gbagbo a year later. He had been out of office for nearly two years when his bullet-riddled body was discovered on a roadside in the commercial capital, Abidjan, during a second attempted coup in 2002.

A total of 22 soldiers, including senior officers close to Gbagbo, have been charged with his killing, though only 19 have so far appeared in court.

Five soldiers testified on Tuesday, all of whom said they had participated in a search for Guei but denied they had assassinated him.

Kouadio Kouadio, who is charged with being an accessory to the murder, said General Brunot Dogbo Ble, then a colonel close to Gbagbo, had ordered him to go to St. Paul’s Cathedral in Abidjan to look for Guei.

“We went and searched the basement and he was there, behind the cartons,” testified Kouadio, who drove members of the elite Republican Guard to the cathedral. “We went to the general’s home afterwards and his wife was there with her aide and guards. We took them to the colonel (Dogbo Ble).”

Dogbo Ble, commander of the Republican Guard, and Captain Anselme Seka Yapo, an officer of the gendarmerie known as “Seka Seka”, are accused of ordering and organising the murders of Guei, his wife and their employees.

Dogbo Ble is already serving 15 years in prison for his 2012 conviction for complicity in violence including kidnapping, illegal detention and murder. Yapo was given a 20-year sentence last August after being found guilty of murder and assault.

Although the 2002 coup attempt failed, the non-commissioned officers behind the attempted power grab maintained their grip on the northern half of the world’s top cocoa grower, eventually becoming the New Forces rebellion.

The group helped bring to power the current president, Alassane Ouattara, after Gbagbo refused to accept his defeat in a 2010 run-off election, setting off a brief civil war.

Gbagbo’s trial before the International Criminal Court for alleged crimes against humanity committed during the conflict opens on Thursday in The Hague.