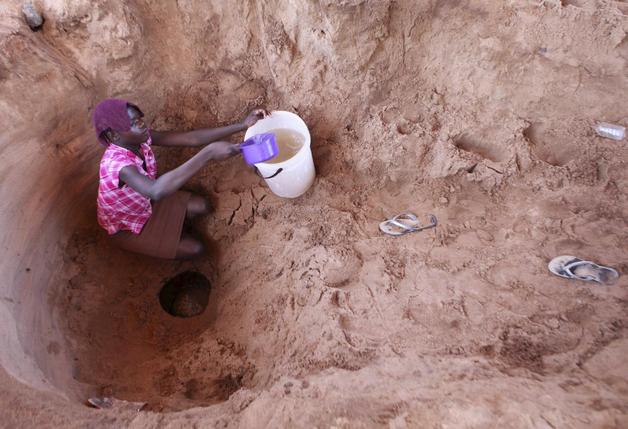 A woman fetches drinking water from a well along a dry Chemumvuri river near Gokwe, Zimbabwe, May 20, 2015.
REUTERS/PHILIMON BULAWAYO

Even in the best of times, life is harsh in Siyagijima, a desolate village in southwest Zimbabwe. After the worst regional drought in nearly a decade and the failure of nearby crops, it is likely to be even harsher.

For 31-year-old Mejury Tererai, whose maize and cotton crops have been decimated, that means feeding her children nothing but scarce maize and groundnuts.

She would be lucky to get 50 kilos of maize this year – enough for just over a month. Her cotton is a write-off and she owes $27 (£17.47) to the firm that provided her with chemicals. If she fails to pay, they will sell her single goat or chickens or rip the corrugated iron roof from her two-roomed house, she said.

She hopes President Robert Mugabe’s government can provide basic support, but it is far from clear that it has the means.

“Our request is that we need help with food so that our children are able to go to school and concentrate,” she said in the village, 400 km (250 miles) southwest of the capital.

“Last year we had a good harvest but this year we got very little. It was too hot and we received little rain,” she added, as her two-year-old son slept on her bosom.

The drought is likely to damage harvests across southern Africa – from southern Angola to Botswana, Lesotho, Malawi, Mozambique and Namibia, the World Food Programme (WFP) says.

The impact is looking particularly serious for Zimbabwe, where the economy has been struggling for five years to recover from a catastrophic recession that was marked by billion percent hyperinflation and widespread food shortages.

The government and foreign relief agencies are still assessing needs but one official said up to 1.8 million people – more than a tenth of the population – may require food aid.

Harare has plans to import 700,000 tonnes of white maize, which would cost $168 million, according to the latest spot prices from GrainSA, a farmers’ body in neighbouring South Africa, the region’s top producer.

That means the burden is likely to fall on the shoulders of international donors, who have been distributing food since 2004 despite broad economic sanctions imposed by the West after the seizure of thousands of white-owned farms from 2000 and a violent election in 2002.

Neighbouring Zambia and South Africa, from which Zimbabwe has imported

maize in the past, also face dramatically lower harvests.

Zambian agriculture minister Given Lubinda told Reuters this month his country’s yield would drop 21 percent but it would still produce an export surplus of 876,000 tonnes.

In a recent estimate, the WFP said crop failure rates in parts of South Africa’s maize belt had been over 50 percent. South Africa grows more than 40 percent of regional maize.

At least 600,000 people in Malawi also need food aid after their crops were washed away by massive flooding in January, the WFP said.

In Gokwe South, Tererai’s district of Zimbabwe, the government estimates 60 percent of the maize crop has failed. Even the larger scale farmers have not been spared.

“We are expecting 6-1/2 tonnes. Last year we had 15-1/2. This year’s crop was severely affected by heat,” said mother-of-three Rosewitha Manjovha, another farmer.

Although drought is blamed for this year’s crop failure, Zimbabwean farmers are reluctant to grow small grains such as sorghum and millet, which are more resistant to drought but are not widely eaten in Zimbabwe.

Most farmers also struggle to buy seed and fertiliser. A 10 kg pack of seed costs up to $30 while a 50 kg bag of fertiliser costs $40, a fortune to many.

Farmers also lose up to 35 percent of harvested maize due to poor storage, according to the WFP.

To counter this, it is piloting a project in which farmers store up to a tonne of maize in airtight canvas “cocoons” that keep oxygen and moisture out. The maize can then be stored for more than six months without being attacked by weevils.

One thought on “Zimbabwe – people go hungry as drought looms”