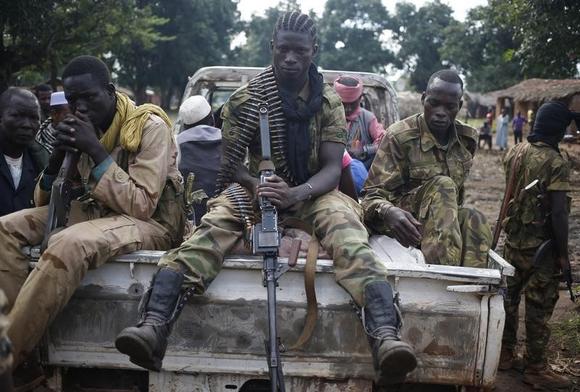 Seleka fighters take a break as they sit on a pick-up truck in the town of Goya June 11, 2014.

BRAZZAVILLE (Reuters) – Central African Republic’s mainly Muslim Seleka rebels signed a ceasefire with the “anti-balaka” Christian militia on Wednesday, after having dropped their demand for the country to be split in two along religious lines.

Seleka’s call for the country to be officially partitioned into a Muslim north and a Christian south risked derailing talks in Congo Republic aimed at ending religious violence that has killed thousands of people.

The ceasefire was signed in Brazzaville after three days of talks hosted by President Denis Sassou N’Guesso, mediator in his neighbouring country’s crisis, which has forced a million people, or about a quarter of the CAR population, to flee their homes.

“We have taken the first step today. The journey is long, but we have made promises. After what has happened here, I am confident,” Sassou N’Guesso said at the signing ceremony.

The Brazzaville talks have involved dozens of members of armed groups, the transitional government and civil society members. Further negotiations will now be held in Central African Republic to hammer out details over disarmament and mapping out the country’s political future.

“We have signed this ceasefire agreement today in front of everyone. Our commitment is firm and irreversible,” said Mohamed Moussa Dhaffane, head of the Seleka delegation at the talks.

Patrick Edouard Ngaissona, head of the anti-balaka delegation, echoed the pledges of peace, saying anyone caught breaking the ceasefire would be arrested.

The former French colony has been gripped by violence since Seleka, a coalition of rebels centred around northerners and some fighters from neighbouring Chad and Sudan, seized power in March 2013.

Seleka’s rule was marked by abuses that prompted the creation of the anti-balaka militia. Cycles of tit-for-tat violence have continued despite Seleka’s leaders stepping down from power in January.

About 2,000 French and another 6,000 African peacekeepers have been deployed to Central African Republic, but they have struggled to help the weak transitional government stamp its authority on the mineral-rich country.

Most Muslims have fled the south of the country, creating a de facto partition, but Seleka’s Dhaffane had pushed for this to be formalised.

The demand was dropped after hours with talks with Sassou N’Guesso earlier on Wednesday.  Reuters